Rise of the Early Roman Republic: Reflections on Becoming Roman

by William Brown
published on 16 January 2019 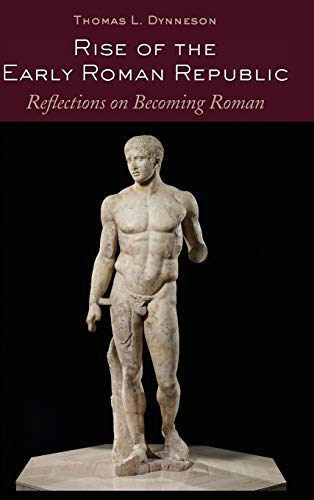 Dynneson provides a unique and different perspective on the issue of early Roman history by focusing primarily on the issue of civicism. The book is oriented primarily for University students. Unfortunately, he lacks expertise as a historian. This results in a volume which is particularly problematic as it relates to the historical validity of claims concerning the rise of the early Roman empire.

Thomas L. Dynneson received his PhD in Education and Anthropology in 1972 from the University of Colorado. From his time as a Visiting Scholar at Stanford University, Dynneson primarily researched civism. As he describes it, civism “is a special insight into the means that states and state leaders use to influence, shape and direct the citizens understanding of their role and their identity in reference to the state” (Autobiography of Thomas L. Dynneson). Continuing this line of research in Rise of the Early Roman Republic, Dynneson examines “ancient and modern historical narratives regarding the formation of an emerging and early Roman corporate identity”(XII). Identity, Dynneson suggests, is directly related to the developing notion of citizenship in the early Roman Republic. Other factors related to the issue of identity include, civism, acculturation, urbanization, and assimilation, each of which he briefly defines.

It consists of five parts. Part One focuses on the events, especially legendary, which helped to establish the Roman mindset. Chapter One describes Numa's (legendary) rise to power and subsequent reformation of Roman society. Chapter 2 outlines the Roman mindset as it relates to Roman religion. Defining landscape as “a three-dimensional physical setting that relates to the interpretation of culture from a context o that focuses on the relationship between humans, nature, and the use of space within an inhabited world” (35), Chapter 3 describes the landscape of ancient Rome. In particular, he attempts to show how landscape provides insight into identity, especially citizenship and communal values. In Chapter 4, Dynneson attempts to establish morals and virtues as a primary aspect of Roman identity and citizenship, especially that of manliness in service to the state. Having simplified the Roman notion of virtue to manliness in service of the state, Chapter 5 discusses how the legend of Lucretia illuminates women's roles in the development of Roman identity. In Chapter 6, Dynneson describes Roman education. Essentially, it was rooted in a model of enculturation, wherein children were taught practical customs that strengthened their civism. He also briefly describes early Roman schools, along with a short story on how a schoolmaster sought to rape a student – an unnecessary section altogether.

Part Two considers the historical origins of Roman culture. Chapter 7 examines the foundation of myths of Rome. He presents the myths and then suggests a more 'hístoric view' based on village culture and tribal kinship. This chapter, though, seems more like a presentation of an anthropological model of kinship and village life than a historical description of Roman villages. Chapter 8 looks at the seven kings of Rome as a means of understanding how the early Roman constitution developed, a constitution which informed citizenship and identity. Chapter 9 tries to argue a model for social development of tribalism to urbanism. From an anthropological perspective, he connects it to issues of citizenship.

Part Three shifts to the topics of acculturation and assimilation. Focusing on the three major groups around early Rome, he considers how Etruscans, Greeks, Phoenicians, and Barbarians influenced Roman society, and therefore Roman identity. For the Etruscans, he points to a strong cultural exchange between Rome and Etruscans, especially with regard military organization, art/architecture, and religion. Concerning Greeks, Dynneson provides an overview of a few Greek settlements in Italy, suggesting that their urbanization and other advanced technologies influenced Etruscan development, and therefore indirectly influenced Roman development. Concerning the Phoenicians, he mainly considers how Carthage influenced Rome. While he presents an overview of Carthaginian history, his presentation is not very strong. The only “influence”of Carthage and Rome seems to be trade expansion. The most elusive historically, Chapter 13 describes how the Celts influenced Rome. In particular, the author describes Celtic culture and history. Then, he points to Celtic-Roman conflict as resulting in military change and reformation. This shift, he argues, led to empire building.

Part Four discusses the emergence of various social classes. First, he deals with the origins of the Roman aristocracy: the Patricians (Chapter 14). Echoing another scholar's ideas, he suggests that the patricians were originally priestly leaders. He further connects aristocratic development to a shift in military organization. He subsequently discusses the plebeians (Chapter 15). Here, he both describes the traditional narrative concerning plebeians and also looks at recent scholarship which views that history as false. So, it is unclear what he is trying to do in this chapter. Moreover, he attempts to connect the traditional narrative to issues of Roman citizenship, as in every other chapter. Next, he attempts to identify the origins of the aristocratic hoplite system on the basis of Roman social structure, urbanization, and power structure (Chapter 16). This chapter, in particular, is dense with too much Latin. Moreover, it is unclear how he contributes to understanding the rise of the Roman republic. The last chapter in this section lays out how Servius may have instituted military reforms which resulted in a new definition of citizenship and moved urbanization forward (Chapter 17).

Part Five describes the foundations of the Roman republic more generally, focusing especially on the structure of Roman political office and government. Dynneson describes this in the most detail in Chapter 18, outlining various reforms including, though not limited to, the consular system, constitutional safeguard, various government positions, nomination and election processes, and republican assemblies (for a helpful overview see the article Roman Republic by Donald Wasson). Finally, in the conclusion, he attempts to summarize the Roman mindset/mentality through the framework of Aristotle's philosophy.

Overall, Rise of the Early Roman Republic presents an interesting perspective on early Roman history. To a certain degree, he does well in providing a general overview, whilst recognizing that the study contains “little in the way of original historical content” (XXII). His perspective is strongly informed by his extensive work in anthropology and studies on civism. His previous work, though, has primarily been done in context of contemporary, modern society - not ancient societies and cultures.

Unfortunately, his lack of expertise with history and ancient societies is clear throughout the volume, especially in terms of how historians attempt to distinguish between myth/legend and historical data in order to reconstruct history. In nearly every chapter, Dynneson references scholars of Roman history who are sceptic about the historical reality of certain narratives found in historical sources like Livy. Even though scholars tend to doubt the historical reality of certain sources and narratives within those sources, Dynneson nonetheless employs such narratives in order to demonstrate the rise of the early Roman republic from the perspective of civism.

From the outset, he states a few assumptions.

This author decided that, even though the early accounts are tainted by myths, inventions, and embellishments, they offer valuable insight into the mindset of the Romans, especially those values and virtues that were maintained to shape a shared perspective of civism as a measure of what they maintained as their ideal characteristics of their citizenship. (XII)

This study also is based on the conviction (key assumption) that early Roman citizenship was shaped by important civisim and other cultural elements that were expressed or communicated in the form of virtues and values that have evolved and have been adopted in connection with its social, political and economic institutions. (XXI)

Concerning the first assumption, Dynneson communicates that sources help us to grasp the worldview of early Roman ideas about citizenship from the perspective of civism, even if early accounts are not necessarily reliable. The second assumption expresses a similar sense: by closely analyzing cultural elements of early Rome as expressed in documentary sources, we can better understand how civism shaped Roman citizenship via expressed values and virtues.

I am inclined to agree with Dynneson, though, only to a certain degree. I am in full agreement that sources like Livy, Dionysisus of Halicarnassus, Plutarch, and others can be used to reconstruct a history of Rome and Roman citizenship; however, it must be remembered that sources like these were composed at a much later period that the early Roman Republic. As Donald L. Wasson comments concerning Livy, he wrote a remarkable history of Rome. “Much of his history, however, especially the early years, was based purely on myth and oral accounts” (Roman Republic by Donald Wasson). Dynneson recognizes this truth throughout the book, as it is stated in the introduction and throughout each chapter. Nonetheless, Dynneson uses legendary events and figures associated with legendary events in order to develop a historical model of Roman identity and citizenship. More likely, legendary stories are more reflective of notions of citizenship and identity as perceived by Romans after the third century, the period wherein documentary source material becomes more reliable.

For example, the first Chapter discusses the legendary king Numa Pompilius. As per Dynneson's presentation, Plutarch and Livy credit Pompilius as having instituted great religious reforms, reforms which “replaced barbarian bloodshed with a new state of mind based on reason” and helped to cultivate a sense of moral behavior and justice (5). Subsequently, he uses these “reforms” in order to reflect on how Pompilius may have brought about new civil order by changing ideas of Roman citizenship during the 8th-7th centuries BCE (12-13). So, he uses acknowledged legendary material to construct a history of Roman civism. This is a trend throughout this book.

Third, the manner in which Dynneson connects Roman history to issues of civism is sometimes confusing and muddled. I suspect this is because there is a disconnect between civism (as a modern, anthropological perspective) and ancient Roman history. This is supported by his statement that “It should be recalled that the Romans in their literature or in their law did not define citizenship, as a concept” (265). Even so, Dynneson attempts to use civism and citizenship as concepts and frameworks for interpreting and understanding the development of early Roman identity. It would have been more helpful if he had provided the reader with a more thorough understanding of civism as an anthropological perspective and more clearly explained how civism illuminates early Roman identity.

In conclusion, Dynneson provides a unique and different perspective on the issue of early Roman history by focusing primarily on the issue of civism. The volume itself includes some interesting stories concerning early Roman history. Unfortunately, he lacks expertise as a historian. This results in a volume which is particularly problematic as it relates to the historical validity of certain claims concerning the rise of the early Roman empire. In short, Rise of the Early Roman Republic may have some interesting details and analyses; however, as the book regularly makes many historical claims, these historical claims should be taken with a grain of salt.

$116.77
free shipping worldwide
$88.73
plus shipping
By purchasing books through this website, you support our non-profit organization. World History Encyclopedia receives a small commission for each book sold through our affiliate partners.

In the late 6th century BCE, the small city-state of Rome overthrew...
Definition

The Early Dynastic Period of Mesopotamia is the modern-day archaeological...

$116.77
free shipping worldwide
$88.73
plus shipping
By purchasing books through this website, you support our non-profit organization. World History Encyclopedia receives a small commission for each book sold through our affiliate partners.
Remove Ads