Athens in the Hellenistic World

by Ian Worthington
published on 11 November 2020

When we think about ancient Athens, it is almost always about the classical city. We think of such things as its numerous monuments (the Parthenon on the Acropolis for example), beautifying everywhere, the Agora swarming with people doing business, discussing current affairs, and chit-chatting, and its flourishing intellectual, artistic, and literary life, including great philosophers like Socrates, Plato, and Aristotle, orators like Pericles and Demosthenes, and festivals that both honored the gods and provided a focal point for people. Daily life was anchored in the ideals of freedom and democracy, and in the 5th century BCE, Athens was an imperial power second to none in the Mediterranean.

But in 338 BCE that life forever changed for all mainland Greeks when Philip II of Macedon (r. 359-336 BCE) defeated a Greek army at the Battle of Chaeronea (in Boeotia) and imposed his hegemony over Greece. Apart from some futile attempts to recapture their freedom, for well over a century the Greeks remained under Macedonian rule until the new power of the Mediterranean world, Rome, absorbed Macedon and Greece into its empire. 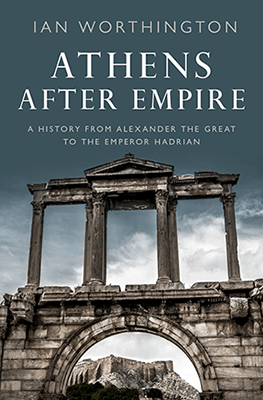 by Ian Worthington
To many the history of post-Classical Athens is one of decline, but Athens recovered from its perilous position in the closing quarter of the fourth century and became once again a player in Greek affairs, even during the Roman occupation. Athenian democracy survived and evolved and famous Romans, including Julius Caesar and Mark Antony, saw Athens as much more than an isolated center for philosophy. Athens After Empire offers a new narrative history of post-Classical Athens, extending the period down to the aftermath of Hadrian's reign.
Learn More

Philip II was assassinated in 336 BCE and was succeeded by his son Alexander the Great (r. 336-323 BCE). He died in Babylon in 323 BCE, having toppled the Persian Achaemenid Empire and marched as far east as India. The three centuries from Alexander's death to the final conquest of the East by Rome with the capture of Egypt in 30 BCE are commonly called the Hellenistic period. It was the era of the kingdoms of Seleucid Syria, Ptolemaic Egypt, Antigonid Greece, and Attalid Pergamon; the age when the opening of East to West by Alexander's conquests came to fruition, with the Greeks realizing their world was far bigger than the Mediterranean; the time when Greek language and culture spread in the east; and Alexandria's great Museum and Library made it the intellectual and scientific epicenter of the world.

Follow us on Youtube!
In the Hellenistic Period, Athens seemed only a second-rate city, its politicians bowing to foreign orders, its democracy robbed, & its economy in shambles.

What was Athens' place in this Hellenistic world? How different was it militarily, politically, economically, and culturally from its classical predecessor? What were the people like and how did they react to their Macedonian and Roman masters? These questions are what my book is about, and some refreshing new answers come to light.

Athens had been an imperial power in the 5th and 4th centuries BCE, but in the Hellenistic period it seemed only a second-rate city, its politicians bowing to foreign orders, its democracy robbed, its economy in shambles, and even its civic and religious institutions curtailed. Under Macedonian rule, it had even suffered garrisons in the port of Piraeus and in the city itself, within eyesight of the Acropolis, home to the patron goddess Athena.

Once Rome brought down Macedon in the 2nd century BCE, Athens was subject to Rome's will. In particular, Roman building activity in Athens, especially under Augustus (r. 27 BCE - 14 CE) and Hadrian (117-138 CE), was steering Athens further away from what Pericles had proudly proclaimed “the school of Hellas” in his funeral oration of 430 BCE (so Thucydides 2.41.1). The Athenians witnessed the Romans' appropriation of much of their culture for their own needs and were victims to widespread looting of artworks throughout Greece, which were taken to Rome for public and private display.

Yet this dreary picture of decline and fall belies reality. It is the result of the hostility of ancient sources, and especially, as I show, the flawed tendency to compare Hellenistic to classical Athens in every area. After Chaeronea, Athens was still a force with which to be reckoned; its people were resilient; they fought their Macedonian masters when they could, and later, they sided with foreign rulers against Rome to regain their freedom.

If anything, given the city's diminished land forces and lack of its once-powerful navy, the people's courageous defiance of oppression against terrible odds was a defining feature of their history. Thus, in 268 BCE, the Athenians idealistically joined forces with Egypt and Sparta to defy Antigonus II of Macedon, being totally defeated seven years later. In 229 BCE, they actually did regain independence, but warfare against Philip V of Macedon (r. 221-179 BCE) after 200 BCE led to an appeal to Rome for help. From then on, the Athenians' future was linked to that city.

In 146 BCE Rome annexed Greece, yet when the opportunity to regain freedom came in the 80s BCE, the Athenians sided with Mithridates VI of Pontus (r. 120-63 BCE) against Rome. That decision would lead to their darkest hour, for in 86 BCE the Roman general Lucius Cornelius Sulla besieged and sacked the city, with a terrible loss of life and destruction to buildings.

But the people recovered, only to find themselves part of the downfall of the Roman Republic. Having welcomed Pompey (106-48 BCE), then Caesar (100-44 BCE), they gave refuge to Brutus after Caesar's assassination on the Ides of March in 44 BCE, and to Mark Antony after he had defeated Brutus and Cassius at Philippi in 42 BCE. After the Battle of Actium in 31 BCE, Athens had to live under Octavian (Augustus) as their ruler, yet the people refused to be cowed. When Augustus visited the city in 21 BCE, he was angered that dissidents had daubed the statue of Athena on the Acropolis with blood and turned it westward, as though the goddess were contemptuously spitting on Rome.

Then a century later, under Hadrian, the city was catapulted again to prominence in the Greek world when that Roman emperor chose it as the center of a newly created league of cities in the east called the Panhellenion. Athens thus enjoyed a renaissance.

Hellenistic Athens was far from being a postscript to its classical self; its rich and varied history continued, and its status as a cultural and intellectual juggernaut, especially in philosophy and rhetoric, enticed Romans to the city in increasing numbers, some to visit (like Cicero), others to study there. Athens should no longer live unfairly in the shadow of its more famous forerunner.

It is not just the imposition of foreign rule that drives the history of “Hellenistic” Athens but the changes to the physical city.

My book does not end with the commonly accepted terminal date of the Hellenistic period in 30 BCE, but controversially in 132 CE with Hadrian. Periodization (dividing up a historical timeframe into periods and giving a name to each one) is a double-edged sword: it is convenient, but it does not follow that the beginning and endpoints reflect things starting and ending but merely continuing with changes. The term "Hellenistic" was coined in 1836 CE by the German historian Johann Gustav Droysen because he believed those three centuries were defined by the spread of Hellenism (Greek language and culture), and the term stuck. But we should not forget that the Greeks did not have this concept of time, and when we look at what Actium and the Roman annexation of Egypt meant for Athens – and Greece – a different picture emerges.

Yes, 31 and 30 BCE were significant years for Rome, but by 31 BCE the Greeks had been part of the Roman Empire for over a century; Octavian was merely another in a line of Roman rulers, and nothing ended in Athens. Octavian had forgiven the people for their support of Antony and given them much needed grain, just as Caesar and Antony had forgiven them for supporting their rivals and had bestowed gifts on the city. It is hard to imagine, then, that the Athenians (or the Greeks) would have felt that Actium, and a year later Egypt's fall to Rome, was the end of a period for them.

To me, the inscription on Hadrian's Arch speaks volumes: “This is the city of Hadrian, and not of Theseus.” There was of course a continuum of Roman rule after Hadrian, but it is not just the imposition of foreign rule that drives the history of “Hellenistic” Athens but the changes to the physical city. Hellenistic rulers had funded buildings in Athens (the Stoa of Attalos of Pergamon in the Agora – now reconstructed – is perhaps the most famous), both to beautify the city and earn them honors as benefactors. These rulers did not take over the city, but the Romans did. Their constructions, especially Hadrian's grandiose building program (including the completion of the Temple of Olympian Zeus, Athens, whose huge size takes your breath away today), impacted the city even more.

What Hadrian had built, where, and why, were his choices. Athens, then, had become as close to a provincial city as one could get, before settling into life in the later Roman Empire. Hadrian's Arch is a fitting climax to a period in Athenian history that should be viewed, I argue, as one block from Philip II of Macedon to Hadrian, when the city was no longer just that “of Theseus.” Athens certainly had its share of ups and downs, but it remained a vibrant city, its people always resilient, its culture captivating the Romans, and commanding respect in the Greek world and in Rome. Hellenistic Athens therefore still shines, just not in the same way as the classical city.

Ian Worthington
Ian Worthington FSA, FRHistS, did his BA at Hull (UK), MA at Durham (UK) and PhD at Monash University. He has written and edited 20 books and over 100 articles on Greek history and oratory. He has won numerous research and teaching awards.

The 1,900th anniversary of the visit of the Roman emperor Hadrian...
Definition

Hadrian's Wall (known in antiquity as the Vallum Hadriani or the...

Submitted by Ian Worthington, published on 11 November 2020. The copyright holder has published this content under the following license: Creative Commons Attribution-NonCommercial-ShareAlike. This license lets others remix, tweak, and build upon this content non-commercially, as long as they credit the author and license their new creations under the identical terms. When republishing on the web a hyperlink back to the original content source URL must be included. Please note that content linked from this page may have different licensing terms.