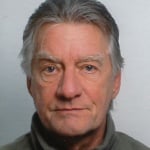 From an early age, drawing and nature have been my favorite pastimes and have remained so to this day. After 12 years of experience as a draftsman, illustrator and designer in a drawing office, I got the opportunity to work as a forester in and around the municipality of The Hague. During this period I also continued to study ecology, evolution and ancient cultures. After 10 years of fieldwork, I started mapping out the nature and landscape values ​​of the municipality of The Hague as a nature and landscape researcher. During this period I also illustrated several books in the field of nature such as the Atlas of the Dutch Butterflies (1986, 1989) and part of the Atlas of the Dutch Mammals (1992). The last 11 years of my working career, as an urban ecologist and policy officer, I have also been able to integrate nature into urban policy by, among other things, developing and implementing an urban ecological main structure. After my early retirement I focused on studying, writing and illustrating books on iconography, calendars, chronology, native art and ancient writings from Mesopotamia and Mesoamerica in particular. I published these on the Academia.edu website.

12,071 people have read this user's contributionsⓘ