The Origins Of War: From The Stone Age To Alexander The Great

by Christopher Berg
published on 05 January 2016 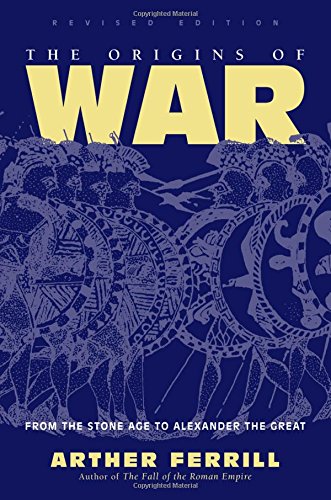 Contrary to popular belief, military history does not begin in Greece. In his book, The Origins of War, Arther Ferrill traces the development of war from prehistoric times until the time of Alexander. Ferrill begins his work in an unconventional manner beginning not with Greece, but with the ancient Near East. Greece became a powerful military power because it incorporated the best features of the Persian system. Victory did not depend upon the size of an army as much as on strategy and tactics. Alexander's battles at Granicus, Issus, and Gaugamela demonstrate that good strategy and tactics will trump superior numbers on the battlefield. The emergence of an integrated-army model made Greece into a powerful military force that would challenge Persia. The ability to utilize skirmishers, light infantry, heavy infantry, and cavalry effectively was a Greek hallmark. Ferrill's book is an excellent introduction to ancient military history. It provides exceptional case studies of specific battles and numerous black-and-white illustrations that supplement the reading.

The first chapter covers prehistoric warfare. Ferrill relies heavily upon cave paintings as his primary source material. The majority of these paintings were peaceful while only a small percentage was violent or warlike. These cave paintings suggest primitive man hunted and fought under a leader, in simple organization, and battle formation. A cemetery in Egypt, called site 117, tells of a society steeped in war. Many of the bodies found within this grave were either executed or suffered trauma to the head. The Neolithic age witnessed the emergence of organized troops, strategy, tactics, and the development of fortification. "Fortified sites are the most impressive archaeological remnants of the military explosion” (28). The best Neolithic example of a fortified city in the Near East was Jericho.

The second chapter covers ancient Near Eastern warfare in the Copper-Bronze Age. New military inventions that would change the conduct of war included the use of metal, the wheel, and the composite bow. The battle of Kadesh illustrates the use of deception as a lure by the Hittites and also showcases Ramses' ability to maintain order and discipline on the field and rally his men behind him. The author likens Ramses at Kadesh to Wellington at Waterloo. The military structures and battles of the Bronze Age were more sophisticated than given credit for and "are all too often ignored by historians who believe that the history of ancient warfare began with Greek heavy infantry . . .” (63).

The third chapter focuses on Assyria and Persia. Assyria was the first Empire in the Near East. Their main priority was defense against the Hurrians, the Elamites, and the Babylonians. They adopted the strategy of terrorism to minimize internal threats. The rebellion of Suro was a violent and ruthless example of Assyrian terror orchestrated as a future deterrent. The Assyrians impaled, flayed, and bricked up people alive. Masters of siege, the Assyrians would use large forces to intimidate their foes. If they still held out, they would utilize deception, battering rams, scaling ladders, and tunneling to make their enemies submit. The Assyrians dominated the Near East for 300 years and could conduct campaigns 1,000 miles away from home. In contrast, the Persians adopted a policy of toleration toward those they conquered. Some nations even welcomed Persian hegemony.

The fourth chapter covers classical Greek warfare subdivided into two subtopics – the Persian wars and the Peloponnesian war. War in Greece pitted phalanx versus phalanx from 675 BCE to 490 BCE. What usually decided the outcome was which side was better trained and disciplined. Ferrill analyzes the battles of Marathon, Thermopylae, and Salamis. Unconventional generalship by Miltiades saved Greece from a far more powerful adversary in Persia. At Thermopylae, the Greek general Themistocles advocated an unpopular plan to strategically hit the Persian fleet because a land assault was futile. Themistocles persuaded the Greeks to prepare for a naval engagement to level the playing field. The ingenuity and farsightedness of Themistocles led to the Persian defeat at Salamis. Deception was used to lull Xerxes into a false sense of security and move headlong against a supposed fragmented Greek army. How were the Greeks able to defeat the Persians? Ferrill attributes their victory to home-field advantage and local knowledge of the landscape and coastline. The Greek historian Thucydides, however, claims the Persians were "defeated by their own mistakes” (122).

The final two chapters are a summary of the highlights of new technology and the progression of warfare with a section devoted to Alexander the Great. The author contends that Greek mercenaries brought back Near Eastern fighting techniques. Xenophon participated in the battle of Cunaxa against Artaxerxes. With this singular experience as his guide, he wrote a careful treatise outlining Greek failings, strengths, and remedies. For example, the Greeks were superior in close combat; however, the Greeks were in great need of a more balanced integrated army. Dionysius of Syracuse brought the catapult, which means "shield piercer", to the fore and perfected siege warfare. In Macedon, Philip II used intelligence gathering and the sarissa to challenge Greece. Philip's innovations in war had not gone unnoticed. The Greek orator Demosthenes paid tribute to Philip's integrated army, in spite of the fact that he was an opponent of Macedonian Hegemony.

Ferrill's survey of ancient military history from the prehistoric past to the age of Alexander the Great is an excellent read. The author's prose style is easy to follow and his arguments are amply supported. Ferrill traces the evolution of warfare but he also pursues other theses including the idea that the evolution Greek warfare is indebted to the Near East via the return of Greek mercenaries who fought in Persia and Egypt. He attributes the vision of Philip II of Macedon in bequeathing Alexander the idea of an integrated army modeled on the Persian model. Ferrill balances weak treatments on Mesopotamian warfare with an excellent chapter on Greek warfare and a chapter on Alexander. This volume is filled with diagrams and visual representations of battles that help the reader visualize how war was conducted. It is well for us to remember that war has a past that reaches even further back than Greece and Rome.

$59.43
free shipping worldwide
$52.85
plus shipping
By purchasing books through this website, you support our non-profit organization. World History Encyclopedia receives a small commission for each book sold through our affiliate partners.

Christopher Berg
A history professor specializing in European and World history, Christopher Berg's research and writing focuses on creating a "usable" past that meets the needs of an educated public in the 21st century.

Antipater (c. 399-319 BCE) was a Macedonian statesman and loyal...
Definition

Berg, C. (2016, January 05). The Origins Of War: From The Stone Age To Alexander The Great. World History Encyclopedia. Retrieved from https://www.worldhistory.org/review/98/the-origins-of-war-from-the-stone-age-to-alexander/

$59.43
free shipping worldwide
$52.85
plus shipping
By purchasing books through this website, you support our non-profit organization. World History Encyclopedia receives a small commission for each book sold through our affiliate partners.
Remove Ads