River Kings: A New History of Vikings from Scandinavia to the Silk Roads

by Kelly Macquire
published on 13 April 2022 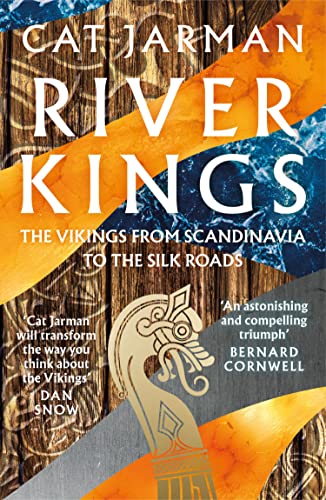 River Kings by bioarchaeologist Cat Jarman follows the journey of a carnelian bead found in Repton, Derbyshire, through the known world of the Vikings to Gujarat, India, where the bead may have begun its journey. Jarman delves into the social and economic world of the Vikings and uses new scientific evidence to shine new light on the movements and trade of the Vikings. A truly insightful read for any lover of the Viking world.

River Kings, written by bioarchaeologist Cat Jarman (who is also a field archaeologist specialising in the Viking Period) takes a small carnelian bead found in the site of Repton and follows what may have been its journey through the Viking world all the way to Baghdad and India.

At the beginning of each chapter, Jarman contextualises the object that will be the focus of the coming chapter in either a fictional or non-fictional way, imagining how it may have been used in the Viking world, or telling us of its modern history such as when it was discovered. Early on, Jarman highlights issues she and other scholars and archaeologists face when interpreting evidence from the Viking world and does not hesitate to err on the side of caution when proposing solutions for issues in the book. Jarman introduces the old information, the new scientific information, and even the biased and unreliable historical information, and then proposes a tentative conclusion that gives the reader the opportunity to agree or disagree with her interpretation of the evidence. Her own personal experiences and insights really enriched the book and gave weight to her suggestions and conclusions.

The graves we find are multifaceted: we have no way of knowing whether those items even belonged to the deceased or whether they were gifts placed there by the mourners. They may not even reflect much about the person's life… The dead do not bury themselves. (21)

…but unless you have another form of proof, it is practically impossible to prove the intention behind their death (38).

I am fascinated with the archaeology of death, and Jarman takes the time to highlight the issues surrounding interpretations of bodies, grave goods, identities, and even the intention behind violent deaths, and she does it succinctly and early on in her book, which really sets the tone for her interpretations and tentative conclusions later on. Jarman suggests caution when interpreting scientific evidence, and points out that we can only glean so much about an individual from the bones and the teeth.

Jarman dedicates much of her book to women in the Viking world & their place in the archaeological record.

Jarman dedicates much of her book to women in the Viking world and their place in the archaeological record, as well as slaves and their lack of representation in the record, despite the lucrative slave trade we know was being conducted during this time. So much of this book fascinated me, and one of those things was how the early work at Repton overlooked women due to their skewed views on women in the Viking Age, not to mention the dispute over the warrior woman found at Birka and the interesting discourse surrounding her. It has been questioned that just because she was buried with weapons does that make her a warrior in life, but these kinds of questions are never asked about men buried with weapons… Another topic of personal fascination is the discussion around how we cannot know the social significance and meaning of exotic goods in the Viking social context and how recontextualising material objects between different groups and cultures can transform their purpose and function. Were they a show of status and wealth? Did exotic goods show an individual's power?

…genetics is not going to give us the ultimate answers: cultures and identities are far more complex and there is no such thing as a 'genetic Viking.' (128)

River Kings is like a stepping stone to even more answers about the Vikings, the objects they left behind, and their movement throughout their known world. As more testing is conducted and new evidence is found, more and more will be understood about the Vikings, and this book is like the first piece of the puzzle on the journey to understanding the whole picture. Not only does Jarman work to understand how a single carnelian bead ended up in a Viking burial at Repton but she also stresses the importance of our understanding of how these types of objects fit into the wider Viking world. This book is a truly rich insight into the trade and movements of people, beliefs and objects in the Viking world, and I could not recommend it enough to any lover of archaeology, ancient trading, and the Vikings.

This review was originally posted on Kell-Read. Thank you Pegasus books for providing an e-book copy of River Kings in exchange for an honest review!

$12.45
free shipping worldwide
$14.18
plus shipping
By purchasing books through this website, you support our non-profit organization. World History Encyclopedia receives a small commission for each book sold through our affiliate partners.

Silk is a fabric first produced in Neolithic China from the filaments...
Definition

The Silk Road was a network of ancient trade routes, formally established...
Article

Bangkok was once more commonly known as the Venice of the East...

$12.45
free shipping worldwide
$14.18
plus shipping
By purchasing books through this website, you support our non-profit organization. World History Encyclopedia receives a small commission for each book sold through our affiliate partners.