Women at War in the Classical World

by Jessica Settergren
published on 08 October 2018 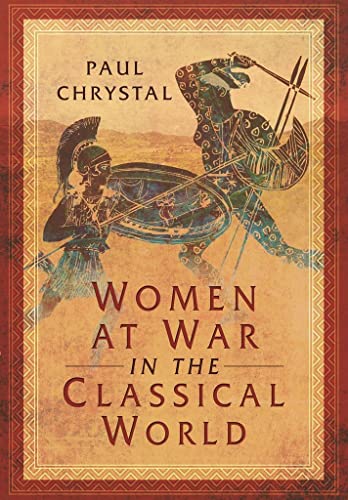 I highly recommend this excellent examination of what war in the Classical world was like for women. Due to some of the subject matter, it's likely suitable for high-school age and up. Well written and easy to digest, this book covers famous and not-so-famous women warriors, leaders, civilians, and casualties of war primarily in Greece and Rome. It's uniquely focused on a population mostly left out of war accounts, with fascinating stories behind famous women in history.

Classical history tends to focus on the big-ticket war stories: Hannibal crossing the Alps, Alexander conquering Persia, Achilles and Hector's final epic battle at Troy or Caesar defeating the Gauls. War has historically been a man's world in the retelling, regardless of the role women played. And yet, throughout Greek and Roman history women are an integral part of war: Atalanta, Penthesilea, Cassandra, Andromache, Hippolyta, Gorgo, Artemisia, Zenobia, and Boudica, to name a few. Politically astute leaders, valiant warriors, casualties, Queens, prophetesses: women's stories are mostly told in the threads and anecdotes that fill the gaps in classical sources. Paul Chrystal explores every aspect of women's roles in conflicts in the ancient Mediterranean, in great and occasionally uncomfortable detail, in Women at War in the Classical World.

He begins with women out of legend: the women of the Trojan War. Referencing multiple texts, Chrystal covers the expected accounts of Amazon warriors fighting on Troy's behalf (and their ultimate defeat), but he goes much further. He provides a visceral scene of what spectators on the wall would see every day, where the women stood above the fight to watch it unfold. He shows clearly how the war outside the walls would have changed everyone's daily perspective, especially the women whose vantage point on the wall not only gave them the sights, but also all the terrible sounds and scents of battle. In Chrystal's analysis, The Iliad's women were not delicate flowers who hid inside and waited wringing their hands: their men were out on that field, and they faced their fate.

If it's true that women have mostly been erased from history, this book is a concerted effort to write some of them back in.

Classical sources seem to categorize women in four ways regarding war: mythical or unwomanly fighters, political leaders actively causing or participating in conflicts, war prizes/rape victims, and challenges to be conquered. Women at War in the Classical World covers all these categories in depth, as well as the more peripheral ways women were involved in or affected by conflict. Of course, there is a comprehensive commentary on the most famous women warriors of history, including a full chapter on the Amazons and a detailed account of Artemisia's exploits for Xerxes. Chrystal, however, doesn't limit himself to the recognizable names; he provides the reader with excellent blurbs on women who may have only been mentioned once or twice in the texts. He does the same for women considered to be opponents/villains over the vast period covered, including Zenobia, Boudica, and others who actively led soldiers against Greece and Rome. Interestingly, he also details the political power of women behind conflicts, ensuring the reader sees how women were involved in every aspect of war. If it's true that women have mostly been erased from history, this book is a concerted effort to write some of them back in.

What makes this book both difficult to read and exceptional as a historical resource is the author's treatment of the third category of women. Rape and sexual slavery are so often glossed over in history unless it is a specific impetus for action by (or directly against) a man. I appreciated that throughout the text Chrystal is unafraid to look directly at the realities of war for women whether they are combatants or not. He baldly states exactly what Andromache, Hecuba, and the other women of Troy would have faced during the sack of their city if they were lucky (or unlucky) enough to stay alive. He discusses the social ramifications to women in the classical world after being raped, since they don't own their own bodies, and how they both feared and expected to be sold into sexual slavery if they survived. Understanding the cultural implications of sexual assault for women in the Classical environment gives the reader a wider perspective on what war was really like for women, even if they were not fighting.

The subject matter of Women at War in the Classical World does not always make for easy reading. It is uncomfortably direct and does not offer euphemisms for the harsh realities of war, whether the woman in question is a combatant, an antagonist, a heroine, or collateral damage. The text is well written and engaging, with a nice variety of in-depth analysis and quick referential blurbs. There is sufficient detail to use Women at War in the Classical World as a reference on its own, and the extensive notes and bibliography point interested researchers to additional sources. The tone of his writing and balanced breadth of subjects makes this work appropriate for both scholar and enthusiast. Ultimately, Chrystal's book gives the most well-rounded, human depiction of what war was like for women that I have ever seen. I highly recommend it to anyone interested in Greek and Roman history.

$39.86
free shipping worldwide
$13.60
plus shipping
By purchasing books through this website, you support our non-profit organization. World History Encyclopedia receives a small commission for each book sold through our affiliate partners.

Artemisia I of Caria

Artemisia I of Caria (l. 480 BCE) was the queen of the Anatolian...
Article

Zenobia's Rebellion in the Historia Augusta

The Historia Augusta (Great History) is a Latin work of the 4th...

$39.86
free shipping worldwide
$13.60
plus shipping
By purchasing books through this website, you support our non-profit organization. World History Encyclopedia receives a small commission for each book sold through our affiliate partners.
Remove Ads