by Mark Cartwright
published on 23 April 2021

Atalanta is a figure from Greek mythology famed as a huntress, wrestler, and runner. The heroine was a key participant in the Calydonian boar hunt, striking the first wound in this fearsome beast with her bow. Long-determined to remain a virgin, Atalanta did finally bow to fatherly pressure and consent to marry but only to a man who could beat her in a running race. Like the goddesses Athena and Artemis, Atalanta is a rare strong female figure in Greek literature and she appears frequently in Greek art in scenes showing her renowned hunting and sporting skills.

In mythology, Atalanta is the daughter of Schoeneus the Boeotian king or the Arcadian Iasus (son of Lycurgus) or Maenalus. Her mother was Clymene. The historian Apollodorus of Athens (c. 180 - after 120 BCE) notes that Atalanta was toughened up with exposure during her infancy, nursed by a bear sent by the goddess Artemis, and then brought up by a group of hunters. Her abandonment to nature by her natural parents may have been because they had wished to have a son. On reaching adulthood, Atalanta, after receiving a warning against marriage from the oracle of Apollo at Delphi, swore to remain a virgin goddess and so she became the hunting partner of Artemis, the Greek goddess.

ATalanta can be identified in art by her short costume or animal hide cloak, & she often carries a spear or bow.

Atalanta’s most famous adventure is her participation in the Calydonian boar hunt, a story that appears in Book 9 of Homer’s Iliad, composed sometime in the 8th century BCE. A huge and hairy wild boar with great white tusks is terrorizing the city of Calydon (Kalydon) and the surrounding area in Aetolia, rampaging through orchards and killing anyone not fleet-footed enough to get out of its way. This fearsome creature had been sent by Artemis to punish Oineus, the king of Calydon for his impiety in not sacrificing to the goddess. Oineus’ son Meleager was to lead the expedition to kill the boar, and he was helped by an all-star cast of Greek heroes.

The hunting party included Jason (he of the Golden Fleece adventure which, in some versions, Atalanta participates in), Theseus, the Dioscuri (Castor and Pollux), Melanion, Peleus, Peirithoos, Atalanta, and a pack of hunting dogs. It was during the long and arduous hunt that Meleager fell in love with Atalanta but nothing came of that. In another version, it is Melanion who has amorous intentions towards the virgin huntress. There were some misfortunes along the way like when Peleus (son of Aecus, the king of Aegina) accidentally killed Eurytion. Atalanta, positioned out on the edge of the half-moon formation the heroes had formed to sweep the forest and find the boar, suffered her own misfortune. She was attacked by the centaurs Rhooecus and Hylaeus. Centaurs were infamous for their unruly behaviour and inability to control their sexual desires but, in Atalanta, they chose the wrong victim, and the huntress easily killed them both.

Follow us on Youtube!
Atalanta’s achievements included beating Peleus at wrestling in the funeral games held in honour of Pelias.

Finally, the boar was struck down by an arrow from Atalanta and then finished off by Meleager. The hapless creature was then duly sacrificed to Artemis, and the hide was given to Atalanta. In a final twist to the boar hunt story, and in a typically tragic ending for a Greek myth, at least in some versions, Meleager killed two of his uncles after they stole the boar’s hide from Atalanta. Meleager then died himself, killed by the actions of his own mother, Althaea. Long before her son’s birth, Althaea had been warned by the Fates that her son would only live as long an ember in her fireplace withstood the flames. Understandably, Althaea immediately took the ember, extinguished it, and kept it safe in a cupboard or chest. Then, hearing news that her brothers had been killed by Meleager and influenced by the Furies, Althaea took the ember and rashly threw it into a fire, and when it expired so too did Meleager, just as had been foretold. In dreadful remorse, Althaea then took her own life.

Atalanta’s other achievements included beating Peleus at wrestling in the funeral games held in honour of Pelias, the son of Poseidon. Although she had been determined to remain a maiden, Atalanta did finally consent to marry following pressure to do so from her father, with whom she was now reconciled. However, there was a catch: Atlanta insisted that her future husband first had to prove himself and beat her in a foot race. Races were duly held, but Atalanta beat all comers, and the losers then had to pay the ultimate price of failure: execution. Then, Hippomenes cleverly won her hand by dropping three golden apples on the track to distract Atalanta and so he won the race (alternative versions have the victor as Hippomedon or Melanion). Several authors, including Apollodorus, state that they were taken to see the traditional site of this racetrack near Methydrion in Arcadia.

Just as the Delphic oracle had predicted, Atalanta and Hippomenes’ marriage was short-lived for, after making love in a temple dedicated to Zeus (or Rhea or Cybele in some versions), they were both punished by the god who transformed them into lions. The couple had had time to produce a son, Parthenopaeus, a protagonist in the Seven Against Thebes story.

Atalanta makes one final appearance in Greek mythology when she is seen in the afterlife in Elysium where heroes are given the choice of any type of soul they wish. Unsurprisingly, given her great prowess at hunting, wrestling, and running, Atalanta chooses to take the soul of an athlete.

Atalanta most often appears in Greek art as a huntress, for example, on the 4th-century BCE pediment of the Temple of Athena at Tegea, and various painted scenes on Greek pottery. She can be identified by her short costume or animal hide cloak, and she often carries a spear or bow. The top neckband of the celebrated François Vase, a large Attic black-figure volute-krater dating to c. 570-565 BCE, illustrates the Calydonian boar hunt with Peleus, Meleager, Melanion, the Dioscuri, and Atalanta on the reverse side. The huntress also appears on red-figure pottery, often holding her famous spear. Finally, Atalanta’s role in the boar hunt featured in the now lost Meleager, a 416 BCE Greek tragedy play by Euripides (c. 484-407 BCE).

Atalanta is sometimes portrayed wrestling during the games which honoured Pelias, usually at the very start of the match when both figures are poised with arms interlocked. In this guise, she often wears a bodice or shorts and a wrestling cap. A fine example of the wrestling match can be seen on a c. 530 BCE black-figure Chalcidian hydria from Vulci (now in Munich). The two wrestlers have a boar skin in the background, undoubtedly the prize for the victor and a clear link between the Calydonian boar hunt and the funerary games of Pelias. Another example of the wrestling match is a mid-4th-century BCE red-figure cup by the Oltos Painter now in the Museo Civico of Bologna, Italy. A red-figure cup in the Louvre Museum in Paris shows Atlanta in a loincloth, wrestling cap, and what looks remarkably like a sports bra. The myth crops up in unusual places such as a shield band from Perachora in the northern Peloponnese - the earliest known depiction - dating to c. 575 BCE and on 5th-century BCE carved gems.

Representations showing Atalanta and the foot races to find her husband are extremely rare in the art of ancient Greece. One known example is on a c. 300 BCE calyx-krater by the Dinos Painter (now on display in the Museo Civico, Bologna), which shows Atalanta preparing for the race while Hippomenes is given the golden apples by Aphrodite and Eros. A fourth type of representation is Atalanta pursued by Eros. A c. 500 BCE lekythos shows Eros chasing the huntress while offering a garland in one hand and holding a whip (restored incorrectly as flowers) in the other. Two Erotes fly above Atalanta, and the scene may represent the huntress’ lack of interest in men (Carpenter, 196).

An illustration that the figure of Atalanta had lasting appeal is a mosaic pavement from a Roman villa at Halicarnassus. Dating to the 4th century CE, Atalanta is shown riding a horse during a lion hunt. The fragment is now on display in the British Museum in London.

We want people all over the world to learn about history. Help us and translate this definition into another language! So far, we have translated it to: Italian, Greek, French, Turkish

Meleager (Greek: Meleagros) is a hero from Greek mythology who...
Definition

Demeter was one of the oldest gods in the ancient Greek pantheon...
Article

Greek mythology was used as a means to explain the environment...
Article

The Rites of Eleusis, or the Eleusinian Mysteries, were the secret... 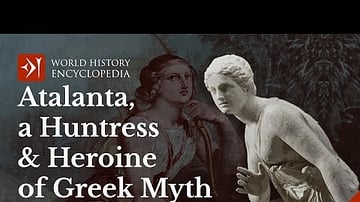 Atalanta, a Huntress and Heroine of Greek Mythology

Atalanta is a huntress and heroine in Greek mythology who, after...

Submitted by Mark Cartwright, published on 23 April 2021. The copyright holder has published this content under the following license: Creative Commons Attribution-NonCommercial-ShareAlike. This license lets others remix, tweak, and build upon this content non-commercially, as long as they credit the author and license their new creations under the identical terms. When republishing on the web a hyperlink back to the original content source URL must be included. Please note that content linked from this page may have different licensing terms.