by Kelly Macquire
published on 27 January 2022

The golden fleece is the fleece of a flying, winged ram named Crius Chrysomallos, or 'Golden-fleeced Ram', in Greek mythology. It is best known from the story of Jason and the Argonauts, who were sent by Pelias, the ruler of Iolcos, to retrieve it from Aeëtes, the king of Colchis.

According to the Roman poet Ovid (43 BCE to 17 CE) in his Metamorphoses, Chrysomallos, the golden-fleeced ram, was the son of Poseidon, the god of the sea, and Theophane, the daughter of Bisaltes, a son of Helios and Gaia. Theophane was a beautiful woman, which meant she was often inundated with men. Poseidon carried her away to the island of Crumissa, where he transformed her into a ewe and himself into a ram. After laying with each other in ewe and ram form, Chrysomallos the golden-fleeced ram was born. The ram was sent by Nephele, a cloud nymph to save her children Helle and Phrixos from being sacrificed. He carried Phrixos all the way from Orchomenos in Boeotia to Colchis, but Helle fell off off the ram's back on the journey and plunged into the sea. When they reached Colchis, Phrixos sacrificed the Ram and laid its golden fleece in a sacred grove to Ares. This golden fleece would then become the object Jason and his Argonauts were sent to retrieve.

Phrixos either sacrificed the ram or the ram itself gave his fleece to the boy before ascending into the stars to become the constellation Aries.

Athamas was the king of a Boeotian city, Orchomenos in southeast Greece. He married Nephele, a cloud nymph, and they had two children, Phrixos and Helle. Athamas began to neglect Nephele and became enamoured with Ino, the daughter of Cadmus, the king of Thebes. Athamas deserted Nephele and married Ino, who held no love for her stepchildren. Ino was furious that Phrixos and Helle were Athamas' heirs, not her children with the king. So, Ino hatched a plan to dispose of Phrixos and Helle to clear the path for her children. Ino corrupted the realm's grain, which meant that it would not germinate when it was sown. In response to this sudden agricultural devastation, Athamas sent messengers to consult with the Oracle of Delphi to see what could be done. Ino however, intercepted the messengers and persuaded them to falsely report back to her husband that the way to resolve their grain problem was to sacrifice Phrixos (and in some sources, Helle, too).

Athamas was convinced he had to sacrifice his firstborn child (or children), but before they could be killed, Nephele sent the golden-winged ram to save her children. They were successfully whisked away from Athamas and Ino, but on their journey, Helle either became dizzy from looking down or lost her balance, and she plummeted into the sea. The place in which she fell became known as the Hellespont, or "Helle's Sea", and this area is now known as the Dardanelles. Phrixos survived the journey and safely disembarked the ram in the region of Colchis. He was welcomed by Aeëtes, the king of Colchis, son of Helios and brother to Circe and Pasiphaë. Next, depending on the source, Phrixos either sacrificed the ram or the ram itself gave his fleece to the boy before ascending into the stars to become the constellation Aries. Either way, Phrixos gave the golden fleece to Aeëtes, who hung it on an oak tree in a sacred grove to Ares and had it guarded by a large serpent, known as the Colchian Dragon, that never slept.

The mythological hero Jason was the son of Aison and lived in the city of Iolcos, which was ruled by Pelias, Aison's half brother. However, it was Aison who should have succeeded his father Cretheus and ruled Iolcos, not Pelias. According to the ancient Greek lyric poet Pindar (c. 518 to c. 448/7 BCE), Jason was reared not in Iolcos but by the Centaur Cheiron on Mount Pelion. Pelias consulted an oracle and was warned to beware of the man with one sandal. He did not fully understand the oracle until Jason emerged from crossing the Anauros wearing only one sandal as he hurried off to take part in a sacrifice to Poseidon that Pelias was conducting.

According to the Bibliotheca – a work formerly attributed to 2nd-century BCE writer Apollodorus of Athens but probably written in the 1st or 2nd century CE – the king asked Jason what he would do if he were warned by an oracle that one of his fellow citizens would murder him, and Jason answered that he would send them to retrieve the golden fleece. So, Pelias sent Jason on the dangerous and potentially fatal journey to retrieve the fleece from Ares' sacred grove, and thus the adventure for the fleece began.

Aeëtes told Jason that he would hand over the golden fleece if he performed some dangerous tasks for him.

Jason enlisted the help of Phrixos' son Argos, who, on Athena's advice, built a mighty ship with 50 oars and named it the Argo. Athena then fitted a piece of oak wood from Dodona that had the ability to speak. After the ship was completed, Jason consulted the oracle, which revealed that after he gathered together the greatest men from Greece, he should set sail. Jason gathered all the best men, including Herakles (Hercules), the Dioskouroi (Dioscuri) twins, Meleager, Peleus, Orpheus, and the sons of Boreas, Zetes and Kalais, and then they set out to sea.

On their way to the golden fleece, Jason and his men had many adventures, including landing at Lemnos the island of only women and ruled by queen Hypsipyle. In Thrace, they came across Phineus, a seer who had not only been blinded by the gods but who also had the female-bird hybrids known as the harpies set against him. They would fly down and take all of his food, and what they did not take was left so foul that no one would dare eat it. The Argonauts approached Phineus, hoping he could help them on their journey, but he would only help if they drove the harpies away from his food. When the harpies swooped down onto a fresh table of food, Zetes and Kalais, who also had wings, chased down the harpies with their swords and killed them. In thanks, Phineus gave the Argonauts favourable winds and advised the best route to take to Colchis.

Upon arriving at Colchis, Jason visited Aeëtes and asked him for the golden fleece, which, understandably, Aeëtes did not want to hand over. Aeëtes told Jason that he would hand over the golden fleece if he performed some dangerous tasks for him, including ploughing a field using fire-breathing bulls, sowing some dragons teeth, and then fighting the monsters that arose from the field. Jason was able to succeed in these challenges with help from Aeëtes' daughter Medea, a powerful sorceress. She promised to help Jason as long as he married her and took her away from Colchis. He swore that he would, and in return, Medea gave him a potion that would make him invulnerable to both fire and steel.

Although Jason succeeded in his tasks, Aeëtes refused to give up the fleece and wanted to set the Argo on fire. Before he could succeed in destroying the ship and killing the crew, Medea led Jason to where the fleece was kept, she put the guardian dragon to sleep and carried the fleece back to the Argo. Accompanied by her brother Apsyrtos, Medea, Jason, and the crew fled Colchis in the dead of night, with the golden fleece in their possession.

On the journey home, Medea stopped her father from pursuing the Argo by murdering her brother, cutting him up into pieces, and throwing the pieces into the sea. They had many adventures on their travels home, including an encounter with the bronze man crafted by Hephaestus named Talos. Talos was given to King Minos of Crete, who had the bronze man run around the island three times a day to keep the shores safe, and consequently, started pelting the Argo with stones as it approached the island. Medea once again solved their problem by driving the bronze man mad with one of her potions.

When the Argonauts returned to Iolcos with the Golden Fleece, it had been four months since they embarked on their journey. Despite returning to Iolcos with the fleece, Pelias still refused to give up the throne, and so Medea took matters into her own hands and used a magic potion to convince Pelias' daughters that if they cut up their father and boiled him in the potion, he would be granted eternal youth. They followed through with Medea's plans and killed their father, but Jason chose not to become the new ruler of Iolcos and instead gave the throne to Pelias' son Akastos.

Medea is an enchantress and the daughter of King Aeëtes of Colchis...
Article

The pan-Hellenic mythological hero Jason was famed for his expedition...
Article 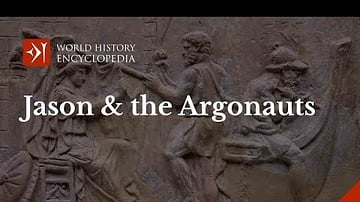 Jason is a mythological Greek hero who is best known for his journey...
Definition

Greek tragedy was a popular and influential form of drama performed...

Submitted by Kelly Macquire, published on 27 January 2022. The copyright holder has published this content under the following license: Creative Commons Attribution-NonCommercial-ShareAlike. This license lets others remix, tweak, and build upon this content non-commercially, as long as they credit the author and license their new creations under the identical terms. When republishing on the web a hyperlink back to the original content source URL must be included. Please note that content linked from this page may have different licensing terms.