Available in other languages: Chinese, Serbian

The Aeneid, written by the Roman poet Virgil (70-19 BCE), is a twelve-book-long epic poem that describes the early mythology of the founding of Rome. The eponymous hero Aeneas, a Trojan prince and son of Venus, faces trials and tribulations as he escapes Troy as it burns and sails the Mediterranean searching for a new home. Virgil spent the last ten years of his life writing the Aeneid, only to die before its completion. The poem is written in dactylic hexameter, a meter known for its use in epic poetry. It also features themes of conflict and renewal, which parallel the decades of civil war and strife the Roman Republic endured before the establishment of the Roman Empire under the rule of Augustus and the peace ("Pax Romana") that accompanied it.

The Aeneid alludes to both the Odyssey and the Iliad, tales of the Trojan War composed as epic poems by the Greek poet Homer in the 8th century BCE. The first six books of the Aeneid are the stories of Aeneas and other Trojan survivors travelling around the Mediterranean, in the style of Odysseus and his crew in the Odyssey. The latter half of Virgil's work focuses on warfare, as Aeneas fights Turnus, king of the Rutuli and a warrior said to be more powerful than Achilles. The Aeneid also contains epic tropes that hearken back to Homer. For instance, in Book V Aeneas puts on funeral games for his dead father, Anchises. These games are strongly reminiscent of the funeral games hosted in honour of Patroclus in Book XXVIII of the Iliad. Later, in Book VI of the Aeneid, Aeneas descends into the Underworld where he encounters his father and Dido, his spurned lover and former Queen of Carthage; Odysseus makes a similar journey in Book XI of the Odyssey. Divine intervention is another prominent feature in the Aeneid; gods such as Jupiter and Venus compel and assist Aeneas to fulfill his destiny, while other divine figures, Juno, for example, actively plot against Aeneas, and attempt to thwart his attempts to reach Italy and lay the foundations of Rome.

Divine intervention is a prominent feature in the Aeneid; some gods assist Aeneas, while others actively plot against him.

The epic begins in media res (Latin for "in the midst of things", another standard technique used in epic poetry) as Aeneas and his men wash up on an unfamiliar shore. He is whisked inland to the court of Dido, Queen of Carthage, where, in Book II, he tells the story of the fall of Troy from the Trojan perspective. In his account, he describes the Trojan Horse on the shores outside Troy, the warning of Laocoön (“Do not trust the horse, Trojans… I fear the Greeks even when they bear gifts!” Aeneid 2.49-50), the Greeks' emergence from the hollow horse and the storming of the gates, the death of King Priam at the hands of Neoptolemus (Achilles' nephew), and the annunciation of his quest to take the Trojan gods and found a new city in the West. Aeneas goes on to describe his journey across the Mediterranean Sea. As he finishes the story, Dido is struck by an arrow of Cupid, Aeneas' half-brother, and falls in love with the Trojan. (This scheme is hatched by Juno to keep Aeneas in Carthage.) Their love was not meant to be, as Jupiter, via Mercury, reminds Aeneas of his destiny and orders him to embark once again in search of his new home. After that divine reminder, Aeneas sets sail on the Mediterranean, still seeking the location of Troy's successor. Heartbroken by his departure, Dido commits suicide.

In Book VI, Aeneas' journey takes him to Cumae (near present-day Naples). The Cumaean Sibyl, a priestess of Apollo, guides Aeneas into the Underworld. There, the Trojan encounters the shade of Dido, still heartbroken and silent, and his father, Anchises, who foreshadows the greatness of Rome. Romulus, he foretells, a descendent of Ascanius, will found Rome, and the city will begin a Golden Age when a Caesar (an obvious allusion to Augustus), another descendant of Ascanius, reigns over the city. Aeneas emerges from the Underworld now aware of the significance of the task charged to him.

Prompted by the gods, Aeneas settles the Trojans in Latium, a region in western Italy, at the invitation of Latinus, king of the Latin tribe. Aeneas begins to court Latinus's daughter, Lavinia, with her father's blessing. Turnus, king of the neighboring Rutuli tribe, also vies for Lavinia's hand in marriage; Amata, Lavinia's mother, supports his courtship. (This is another conflict engineered by Juno to prevent the establishment of Rome.)

In the end, Aeneas marries Lavinia, a fact that spurs Turnus to arms. The king of the Rutuli raises an army against Aeneas and the Latins. Seeing that he is outnumbered, Aeneas turns to the Tuscans and the Arcadians for help. With their assistance and after much fighting, the forces of the Rutuli are turned back with many casualties on both sides. The epic concludes abruptly as, in one-on-one combat, Aeneas mercilessly strikes down an injured Turnus.

We want people all over the world to learn about history. Help us and translate this definition into another language! So far, we have translated it to: Chinese, Serbian

Queen Dido (aka Elissa, from Elisha, or Alashiya, her Phoenician...
Definition

In Greco-Roman mythology, Aeneas is a Trojan prince and the legendary... 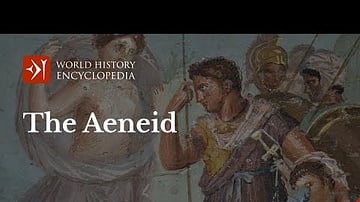 The Roman Epic Poem The Aeneid: Introduction and Summary

The Aeneid was written by the Roman poet Virgil who lived between...
Definition

Submitted by William F. Cole, published on 17 August 2014. The copyright holder has published this content under the following license: Creative Commons Attribution-NonCommercial-ShareAlike. This license lets others remix, tweak, and build upon this content non-commercially, as long as they credit the author and license their new creations under the identical terms. When republishing on the web a hyperlink back to the original content source URL must be included. Please note that content linked from this page may have different licensing terms.