Available in other languages: French, Turkish

Born into slavery in rural Georgia, John Wesley Gilbert (1863-1923) rose to national prominence as a scholar, teacher, community leader, and Christian missionary. During 1890-91, he was the first African American member of the American School of Classical Studies at Athens. He was among the first 50 Americans of any race, ethnicity, or background to conduct professional archaeological work in Greece.

For much of the 20th century, Gilbert was best known for his 1911-1912 mission to the Belgian Congo with white bishop Walter Russell Lambuth of the Methodist Episcopal Church, South or MECS (the MECS has since become part of the United Methodist Church). Gilbert's 1890-1891 sojourn in Greece at the American School of Classical Studies at Athens, in contrast, often received passing word but never serious study. In 2011, the newly founded Society of Black Archaeologists recognized Gilbert as the first professionally trained African American archaeologist. Today, he is often called "the first black archaeologist." Yet his life, and especially his year in Greece, has never received the in-depth exploration it deserves, until now.

No one was sure how the fire started. In the pre-dawn hours of 3 August 1968, flames swept through Haygood Memorial Hall, the main building of historically black Paine College in Augusta, Georgia. Bystanders gathered to watch helplessly as the blaze climbed up, engulfing Haygood's famous clock tower, which for nearly 70 years had rung out the hours loud enough to be heard across town. The structure was still smoldering at sunrise. The clock tower stood but was too damaged to save and had to be pulled down. Inside was devastation. Though fireproof cabinets protected recent student records, the offices of Paine's president and vice president were destroyed, along with a priceless collection of African artifacts. Many of the school's early catalogues, newspapers, and other records also perished.

The tragic loss of so much of Paine's historical record has hindered study of the school's history and especially of its first student, first graduate, first black faculty member, and perhaps most famous alumnus: John Wesley Gilbert. A series of floods and fires in Augusta between 1880 and 1920, which often hit black neighborhoods the hardest, had already wiped away much written evidence of his life. Anything that Gilbert's family hung on to after his death in 1923 began to disappear as his children scattered from Augusta, and he had no grandchildren to preserve heirloom papers. By 1968, Paine held the last surviving copies of many documents of Gilbert's career.

Gilbert was among the very first Americans to do professional archaeological work in Greece.

John Wesley Gilbert was born into slavery in rural Georgia in 1863. After Emancipation, young Gilbert had his first lessons in the segregated public schools of Augusta, Georgia. He then attended the Baptist-sponsored Augusta Institute and Atlanta Baptist Seminary (predecessors of Morehouse College), and in 1886 became the first graduate of Paine Institute (today Paine College), a cooperative foundation of white and black Methodists. From 1886-1888, Gilbert studied Greek and Latin at Brown University, becoming that school's third black graduate in 1888. He returned to Augusta, where he would teach at Paine until almost the end of his life. In 1890-91, he was able to go to Greece thanks to a fellowship from Brown University.

Gilbert was the first African American and one of the first 50 Americans of any race, ethnicity, or background to attend the American School of Classical Studies at Athens. Founded in 1881 by a consortium of American colleges and universities to foster the study of ancient Greek literature, history, art, and archaeology, the American School was the United States' first overseas research institution and is today an internationally recognized research and teaching center. Gilbert was among the very first Americans to do professional archaeological work in Greece – indeed, anywhere in the Mediterranean and Near East.

Gilbert was the first American scholar to write about the urban demes (neighbourhoods or districts) of Athens, a topic of fundamental importance to understanding Athenian democracy. His thesis on the demes won him a master's degree from Brown University, making him among the first African Americans to receive an advanced degree in classical studies. At Eretria, he took part in the widely publicized excavation of "the tomb of Aristotle" and, more importantly, worked on one of the very first American archaeological and topographical surveys of an ancient site. In addition, Gilbert experienced Greece at a pivotal moment in the country's modern history, as European influence, railroads, the international market for commodities such as raisins and tobacco, and the beginnings of mass tourism were reshaping the country's economy and society.

John Wesley Gilbert left an extraordinary legacy as scholar, teacher, community leader, civil rights activist, and missionary. In addition to his renown as "the first black archaeologist," his life and work touched many different aspects of the African American experience. Learning more about Gilbert opens the way to a better understanding of the enormous achievements of an entire generation of black students and educators in the late 19th and early 20th centuries, achievements that are too often overlooked today.

We want people all over the world to learn about history. Help us and translate this definition into another language! So far, we have translated it to: French, Turkish

John Lee joins World History Encyclopedia to tell us all about... 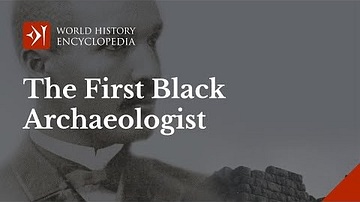 The First Black Archaeologist: A Life of John Wesley Gilbert with John Lee

The First Black Archaeologist: A Life of John Wesley Gilbert by...
Image

In the canon of the New Testament, the fourth gospel of John is...
Definition