Running a website with millions of readers every month is expensive. Not only do we pay for our servers, but also for related services such as our content delivery network, Google Workspace, email, and much more. We would much rather spend this money on producing more free history content for the world. Thank you for your help!
$2080 / $21000
❤ Donate

by Jessica Settergren
published on 14 June 2017 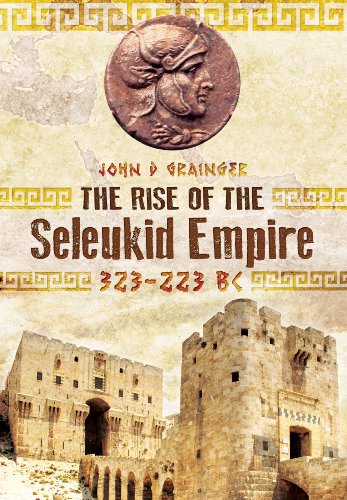 I'd recommend this for scholars and historians. It's an excellent resource for details surrounding the establishment and foundation of the Seleukid Empire. The subject is interesting, but some prior knowledge of the main political players after Alexander the Great's death is helpful.

The day Alexander the Great died, his empire began to fall apart. With no clear succession plan and only an infant son's tenuous claim to Alexander's legacy, his generals were no longer united by common devotion to their leader. And so, their personal motivations became the political manoeuvring that split the empire into ever-shifting pieces.

John Grainger's The Rise of the Seleukid Empire deals primarily with the political and military exploits of one of those generals, Seleukos (aka Seleucos I), and the first century of his resulting empire. Seleukos was not one of Alexander's star generals: the Macedonian came to command later during the campaign and was neither terrible nor a superstar. Upon their leader's death, the generals wasted no time forming alliances and plans to continue the Empire, under the guise of holding it for Alexander's heir. Alexander had adopted the Achaemenid rules of governance when he conquered Persia, including the regional Satrapies (governed provinces). Since many of the existing Satraps had been executed for rebellion during Alexander's rule, the generals naturally took over these pre-existing territories in splitting up the empire. Ultimately, Seleukos and his family moved to Babylon, where he created a base kingdom resulting in a large and powerful empire.

This book is first in a series of three in-depth studies of the Seleukid dynasty and their Empire. Most of the first book in Grainger's series gets into the political machinations amongst the emerging leaders amongst Alexander's generals, and the seemingly endless wars and jockeying between the new powers. It took Seleukos over 30 years to become secure in his Satrapy and expand it from Babylon to the surrounding areas.

Grainger does not only focus on Seleukos's military and political successes. Missteps, betrayals, shifting loyalties, and the petty pains of ruling city-states who didn't wish to have Macedonian rulers are all covered, to a detailed degree. Seleukos and the immediate post-Alexandrian chaos takes up nearly the first half of this volume. The later chapters cover the next three generations of leaders' attempts to maintain or expand the original territory, ending in 223 BCE.

Seleukos's interesting personal life is also recounted. Alexander apparently compelled his generals to marry tribal leaders' daughters during his rule in Persia, partly to cement ties between the subject and the new ruling class and partly to keep his core group of advisors tied to lands far from home even during their occupying peace. Grainger notes that Seleukos alone of all the generals stayed married to his assigned princess after Alexander's death, where all the rest abandoned their foreign families, which says something about either Seleukos's sentimental ties or political savvy (perhaps both). Either way, this Eastern and Macedonian tie forms the basis of the ruling family's legitimacy to both ends of the empire. The later intermarriages across competing leaders' territories becomes a web of royal political alliances equal to the messy family relational ties of medieval Europe.

While the topic and the detail are fascinating, there seems to be an assumption by the author that the reader is well versed in all the players and tribal intricacies of the ever-changing powers in the Ancient Near- and Middle-East. This is not a fast or easy read: the political sands shift so quickly amongst the leaders and their families it would have been helpful to have a more detailed timeline included along with the maps and genealogy charts. This is especially true in the layout of the chapters, which bounce around occasionally in the timeline to cover the more mundane aspects of the evolution of Seleukid governance and city-building.

Grainger clearly has a serious passion for this topic, and The Rise of the Seleukid Empire provides all the detail any serious scholar could hope for in covering the first century of activity. He does an excellent job of giving a more objective view of Seleukos's decisions, but the writing style can waffle between too scholarly and too much supposition. Some of the assumptions and conclusions seem to be made through a more modern lens, which I found fascinating and yet detracting from the historical record. The tactical conclusions, however, are based on the documented military moves and absolutely logical. Grainger includes plenty of background information and notes to substantiate his conclusions in the appendix.

I would recommend this book to more advanced scholars of the time period and Alexandrian history. It is a fully detailed account of the events that led to the establishment of Seleukid rule that includes scholarly leaps to fill in gaps with interesting conclusions, but it's definitely not an introductory text. I look forward to the second and third instalments of the series based on the wealth of information included in the first – truly, John Grainger provides a rich picture of life in the post-Alexandrian world.

$121.85
plus shipping
By purchasing books through this website, you support our non-profit organization. World History Encyclopedia receives a small commission for each book sold through our affiliate partners.

The Seleucid Empire (312-63 BCE) was the vast political entity...
Definition

Babylon is the most famous city from ancient Mesopotamia whose...

$121.85
plus shipping
By purchasing books through this website, you support our non-profit organization. World History Encyclopedia receives a small commission for each book sold through our affiliate partners.
Remove Ads