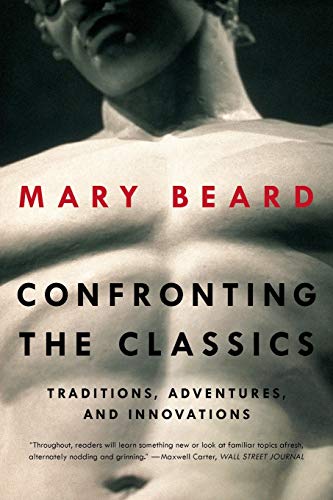 In this collection, Mary Beard discusses some of the debates in Greek and Roman scholarship, proving that the Classics are far from dead. This is a fascinating read, but not for beginners.

It feels slightly ironic to be writing a review of a book that is essentially a collection of reviews. As Classics editor of the Times Literary Supplement, Mary Beard draws on the wealth of material at her disposal to give her readers a snapshot of some of the ongoing debates mobilising present day academia – from biographies of Sir Arthur Evans (discoverer of Knossos) to translations of Asterix comics, the breadth is impressive. The book is divided into neat sections covering Ancient Greece, the early days of Rome, the emperors, your average Roman (including slaves) and classical reception (that's the Asterix bit). So it's easy to dip in and out of, but anyone who is a newcomer to Classics should beware. Aside from a few paragraphs of background information at the start of each review, these essays are quite technical and best enjoyed with at least a basic knowledge of who's who in ancient history.

If you have that, however, this book is full of intriguing ideas. The chapter on Alexander the Great, challenges the reader to re-examine their understanding of his character by thinking about who was writing about him – namely the Romans. Beard points out the similarities between Arrian's account of Alexander's grief for Hephaestion and the Emperor Hadrian's for Antinous, suggesting that “Arrian was modelling his own picture of Alexander on the behaviour of the emperor under whom he served”. It's like imagining the Roman reaction to Germanicus' death by borrowing scenes of public grief at Princess Diana's funeral – it says much more about our society than theirs'. Similarly, in a chapter reviewing several books on Augustus' wife, Livia, Beard is enthusiastic about one writer's discussion of I, Claudius. Looking at the television adaptation and its re-edit for American audiences, Beard points out that “it exploited conventions … of family soap opera”, inflating Livia's role as villainess beyond even the depths that Robert Graves had sunk her to. Here Livia's power is seen to chime with right-wing politics of post-watershed America, arguing for women to be kept out of the political classes. There's a sense that Tacitus' would have approved.

Throughout all, Beard's prose simply screams authority. She has a blistering command of language – tearing down one writer's biography of Cicero by pointing out his “nasty howlers” in Latin – and bears out her criticisms with thoroughly explanations of how far archaeological or literary evidence can take us. T.P. Wiseman comes in for some especially exasperated criticism as Beard complains about his tendency to rely on historians or playwrights whose work has been lost (or possibly never existed in the first place). Commenting on his reconstruction of Caesar's murder in Remembering the Roman People, Beard insists that “Intriguing as it would be to … trace a memorable scene in Shakespeare back to a scene in an ancient Roman play, there is no evidence whatsoever for any such thing”. As a reader, it is enjoyable to piggyback on her knowledge and feel pleasantly superior to the authors she writes about.

Despite the fact that this is a collection rather than a single discussion, a prevailing argument does begin to surface. Time and again Beard laments Classicists' wish to reconstruct an accurate narrative of what happened. Whilst frequently pointing out that there are gaps in the biographical details of people such as Augustus or indeed a virtual vacuum for figures like Boudicca, Beard attacks the straight biographers like Anthony Birley for “summon[ing] up enough credulity” to regurgitate stories that were clearly tropes for any King or ruler in ancient times. Instead, Beard praises those authors who look at representation. She asks how figures like Caligula were depicted and why? How the Colossus built by Nero survived his bloody end and came to represent different things at different times? What literature and art tell us about the average Roman's attitude to war?

Her final chapter on Classical reception demonstrates how scholars might look at the Classics sideways. For example, she looks at how Asterix's comics demonstrate the tradition of seeing Roman occupation as a case of submission or resistance, instead of supposing a more nuanced relationship. Turning to the history of Classical scholarship itself, she sees the cult of 'the scholar' as a key influence on whose writings have been most consumed by the wider public. For example, Sir James Frazer's success was down more to his “shy donnish character” than to real interest in the arguments of his 400-page epic, The Golden Bough. The last point is rather ironic since Mary Beard herself is something of a scholarly popular icon. How many people would buy Confronting the Classics after all if this quirky, grey-haired lady was not to be found hopping around ancient ruins on i-Player?

If you don't know Romulus from Pompey, or have never heard of Cassius Dio, this isn't the book for you. But if, however, you are ready to step a bit deeper into the classical world, if you want your preconceptions challenged and your thirst for exploration wet, it is a perfect starting point. To round the book off, Beard gives a passionate defence of the art of reviewing itself. The point, she argues, is to “bring both old hands and new into the classical conversation”, to stimulate the discussion that makes writing books so worthwhile. Well, Mary, has certainly done her bit – but whether this review passes muster is up to you.

$19.30
free shipping worldwide
$19.39
plus shipping
By purchasing books through this website, you support our non-profit organization. World History Encyclopedia receives a small commission for each book sold through our affiliate partners.

We have prepared two lesson plans including classroom activities...
Definition

Greece is a country in southeastern Europe, known in Greek as Hellas...
Article

Ancient Persian culture contributed many of the aspects of the...

$19.30
free shipping worldwide
$19.39
plus shipping
By purchasing books through this website, you support our non-profit organization. World History Encyclopedia receives a small commission for each book sold through our affiliate partners.
Remove Ads