by Carole Raddato
published on 22 February 2021

Available in other languages: Turkish, Japanese

Home to some of the Middle East’s most majestic ancient ruins, Lebanon has a rich and varied heritage with over 5,000 years of recorded history. Over the millennia, different conquering empires have left their footprints on the architecture and culture of the country. Phoenicians, Greeks, Romans, and various Arab dynasties have all populated its shores, leaving a stunning archaeological history to explore. With impressive archaeological sites at Baalbek, Byblos, Tyre, and Anjar - all given World Heritage Site status by UNESCO in 1984 CE - Lebanon promises visitors a journey through the annals of some of the world’s greatest civilisations.

Lebanon has endured a complex and turbulent past and experienced several forms of conflict. As such, this beautiful and welcoming country has been unable to have tourism reach its full potential. However, peace has returned (in spite of the recent anti-government protests), and a visit to Lebanon is more rewarding than ever. The country remains a relatively safe place for tourists, especially for those travelling with a tour operator or local guide.

Here is a list of five must-see ancient sites in Lebanon.

The sanctuary of Jupiter Heliopolitanus is the largest temple of the Roman Empire, & only six of the original 54 columns remain standing.

Baalbek is a masterpiece of Roman architecture, famous for its exceptionally well-preserved colossal sanctuary. For centuries the temples of Baalbek (called Heliopolis or the 'Sun City' during Roman times) lay under metres of rubble, obscured by medieval fortifications. Large-scale excavations at the site began in 1900 CE. The uncovered site consists of the sanctuary of Jupiter Heliopolitanus, composed of the Propylaea, the Hexagonal Court, the Great Courtyard, and the Jupiter Temple. It is the largest temple of the Roman Empire, and only six of the original 54 columns remain standing. The complete sanctuary was formed into a raised plaza 120 metres (393 ft) wide and 400 metres (1,968 ft) long, creating a dramatic effect for the approaching visitor. The main construction campaign in the complex lasted over 200 years, from the mid-1st century CE to the 3rd century CE.

South of the complex lies the remarkably well-preserved so-called Bacchus Temple and the small Round Temple, with the latter situated outside the main complex. The temples were closed in 313 CE when Constantine I (r. 306-337 CE) made Christianity the Roman Empire's official religion.

Near Baalbek is a Roman quarry where archaeologists have uncovered the largest stone building blocks ever carved by human hands. The biggest is 19.6 metres (64 ft) long, 6 metres (19 ft) wide, and 5.6 metres (18 ft) high, and weighs an estimated 1,650 tons. The blocks likely date to c. 27 BCE and were probably intended for use in the Temple for Jupiter in Baalbek. It has been suggested that the stone never made it out of the quarry because it was too massive to transport. 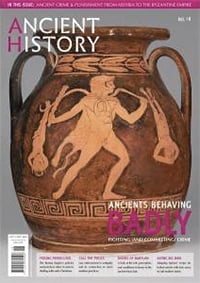 FREE SHIPPING WORLDWIDE
This article was first published in Ancient History Magazine and republished with permission. Ancient History looks at every aspect of the ancient world: you'll find articles covering politics, society, literature, language, religion, economics, and art - all in one magazine!
Get the Magazine
Remove Ads

Once dubbed the 'Queen of the Seas', the ancient city of Tyre was one of the earliest Phoenician metropolises, where, according to legend, purple dye was invented. Located along the eastern bank of the Mediterranean, this great Phoenician city became a flourishing commercial centre for international trade. Excavations have uncovered the remains of Graeco-Roman, Crusader, and Byzantine civilisations, but most of the remains from the Phoenician period lie beneath the present-day town. Today, three historical sites are accessible to visitors: the Al-Bass and Al-Mina sites, and the Byzantine basilica.

The Al-Bass archaeological area consists of an extensive necropolis, a monumental arch built during the reign of Hadrian (117-138 CE), and a Roman hippodrome, one of the largest ever found. All date from the 2nd century CE to the 6th century CE. Located on what was originally the Phoenician island city, the Al-Mina site has remains of civic buildings, colonnades, and Roman baths.

Byblos was a port city that bears witness to the beginnings of the Phoenician civilization. This atmospheric archaeological site incorporates Neolithic, Chalcolithic, Phoenician, Greek, and Roman ruins, making it one of the world’s oldest continuously inhabited towns. Although mentioned by numerous travellers since the 12th century CE, it was not until the end of the 19th century CE that Byblos’ multiple layers of history (seven in total) began to be unearthed. Its most prominent landmark is a 12th-century CE Crusader castle which now houses a small museum and whose rooftop offers panoramic views over the entire archaeological site. The ruins include the remains of the Phoenician ramparts, several temples dating from the 3rd and 2nd millennia BCE, and a reconstructed Roman theatre overlooking the sea.

The Temple of the Obelisks is possibly the most atypical structure on the site. It was constructed around 1600-1200 BCE and comprised a sacred courtyard with a number of standing obelisks. Aside from the obelisks, more than 1,000 ex-voto statuettes representing males attired with gold leaf and wearing conical hats were discovered here. They are now displayed at Beirut’s National Museum.

Praised as the birthplace of the modern alphabet, Byblos was also once the epicentre of the world’s maritime trade. Cedarwood, in particular, turned it into a major timber shipping centre in the eastern Mediterranean.

The ruins of the picturesque site of Faqra are situated in the Nahr El-Kalb valley region to the north of Beirut. They include temples, altars, and a large square monumental tower scattered at two separate locations. The first site consists of a monumental temple-sanctuary dedicated to a deity named Zeus Beelgalasos, the local Baal of Faqra, as well as a small temple dedicated to Atargatis, the chief goddess of northern Syria.

The second site is dominated by a large 15-metre-square tower, which initially had a third storey and a pyramid-shaped roof. Two Greek inscriptions indicate that the building was dedicated to the Roman emperor Claudius (r. 41-54 CE) and the god Zeus Beelgalasos in 43 CE. Two other buildings can be seen 50 metres (164 ft) northwest of the tower. The largest is an altar used for making sacrifices, while the other is a small colonnaded altar.

Founded during the 8th-century CE Umayyad Caliphate, the city of Anjar was an inland trading centre at the crossroads of two important routes: one connecting the Mediterranean coast with the Syrian interior, and the other linking northern Syria with northern Palestine. Archaeologists only discovered the site at the end of the 1930s CE when excavations uncovered a fortified city covering an area of some 11.4 hectares (28 acres), surrounded by two-metre-thick (6.56 feet) walls.

Two main 20-metre-wide (65 ft) streets, a north-south axis (cardo maximus) and an east-west axis (decumanus maximus), divide the city into four equal quarters, with private and public buildings laid out according to a strict plan - the partially rebuilt Grand Palace with its central courtyard surrounded by a peristyle, the Small Palace with its numerous ornamental fragments and its richly decorated central entrance, and a mosque located between the two palaces, as well as small harems and baths.

The ruins are dominated by a monumental Tetrapylon, a structure consisting of four columns that stands at the crossroads of the two main streets. These structures incorporate decorative or architectural elements of the Roman era.

You cannot leave Lebanon without visiting the National Museum in Beirut. Its impressive, beautifully displayed collection of archaeological artefacts offer an excellent overview of the history and peoples who have helped shape the development of this multifaceted country.

On the ground floor, 83 large objects – sarcophagi, mosaics, statues, and low reliefs – are displayed in chronological order ranging from the 3rd millennium BCE to the Byzantine period (395-636 CE). On the upper floor, visitors can admire around 1,000 smaller but more delicate artefacts arranged in chronological order. As for the basement, the pieces shown are mainly characteristic of Phoenician funerary art from the 5th century BCE.

This article was adapted from an article previously published in Issue 27 of Ancient History Magazine.

We want people all over the world to learn about history. Help us and translate this article into another language! So far, we have translated it to: Turkish, Japanese

Carole Raddato
Carole maintains the popular ancient history photo-blog Following Hadrian, where she travels the world in the footsteps of emperor Hadrian.

The art of the ancient Phoenicians, which flourished between the...
Definition

Tyre (in modern-day Lebanon) is one of the oldest cities in the...
Definition

Phoenician architecture is typified by large temples with double-columned...
Definition

Submitted by Carole Raddato, published on 22 February 2021. The copyright holder has published this content under the following license: Creative Commons Attribution-NonCommercial-ShareAlike. This license lets others remix, tweak, and build upon this content non-commercially, as long as they credit the author and license their new creations under the identical terms. When republishing on the web a hyperlink back to the original content source URL must be included. Please note that content linked from this page may have different licensing terms.