Founded around 181-180 BCE during the time of the Roman Republic, Aquileia was an ancient Roman city located at the head of the Adriatic Sea on the Natiso River west of the Roman province of Illyria. Initially, the area was controlled by Transalpine Gauls as a way to manage travel over the Alps; however, due to its strategic location, it would eventually become one of the largest and wealthiest cities of the Roman Empire with a population approaching 100,000, including Greeks, Celts, Egyptians, and Jews. Its importance was demonstrated when it became the administrative capital of Venetia et Istria.

Since the Romans wished to exploit neighbouring gold mines, Aquileia's location served as an industrial stronghold as well as a buffer against the Gallic tribes to the north. Over the years, families settled in the area as reinforcements to the garrison stationed there. Although it was often sacked by these neighbouring, warring tribes, both Julius Caesar and Augustus (r. 27 BCE - 14 CE) realized its significance and enabled the city to thrive. Sometimes called Roma Secunda, it served as a supply centre for the Roman army to the south. The future emperor Vespasian (r. 69-79 CE) stopped at Aquileia on his way to Rome after the suicide/death of Emperor Otho during the Year of the Four Emperors (69 CE). Emperor Marcus Aurelius (r. 161-180 CE) made it a primary fortress. After Attila the Hun sacked and destroyed the city in 452 CE, many former residents fled to neighbouring Venice.

We want people all over the world to learn about history. Help us and translate this definition into another language! So far, we have translated it to: Italian, Serbian, Portuguese

Donald L. Wasson
Donald has taught Ancient, Medieval and U.S. History at Lincoln College (Normal, Illinois)and has always been and will always be a student of history, ever since learning about Alexander the Great. He is eager to pass knowledge on to his students.

A Roman dice made from amber. 1st-2nd century CE. From Aquileia...
Image

A perfume-pot made from amber and depicting cupids and a panther...
Image

The provinces Noricum, Raetia, and Dacia served as a buffer protecting... 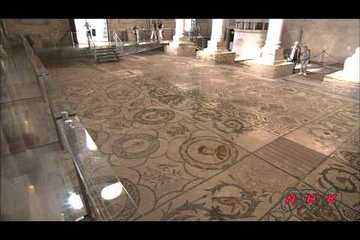 Archaeological Area and the Patriarchal Basilica of ... (UNESCO/NHK)

Aquileia (in Friuli-Venezia Giulia, Italy), one of the largest...

Submitted by Donald L. Wasson, published on 23 February 2013. The copyright holder has published this content under the following license: Creative Commons Attribution-NonCommercial-ShareAlike. This license lets others remix, tweak, and build upon this content non-commercially, as long as they credit the author and license their new creations under the identical terms. When republishing on the web a hyperlink back to the original content source URL must be included. Please note that content linked from this page may have different licensing terms.