Sukhothai or Sukhothai Historical Park was the former capital of the Kingdom of Sukhothai (1248-1438 CE), which was founded by King Si Inthrathit (r. 1238-1270 CE) and was the first in a series of independent polities that would eventually coalesce together to form what is present-day Thailand. Sukhothai is located in northeast Thailand and lies 12 km (miles) from the modern city of Sukhothai Thani and 430 km (280 miles) from Bangkok. At its height, Sukhothai was a magnificent, albeit, small city with elegant temples, palaces, stunning monuments, and waterways. The effervescence of culture in this city during the 13th and 14th centuries CE has left an indelible imprint on Thai art, language, and politics, and Sukhothai is still revered as the birthplace of Thai culture by Thais today. UNESCO declared Sukhothai and the neighboring ruins of Si Satchanalai and Kamphaeng Phet as a single UNESCO World Heritage Site in 1991 CE.

The historic city of Sukhothai is located in the modern province of Sukhothai in what is presently northeastern Thailand, near the Yom, which is one of the larger tributaries of the Chao Phraya River. In Sanskrit, Sukhothai means “Dawn of Happiness” or “Emergence of Joy.” Sukhothai was originally a small Khmer city in design and structure with Hindu temples and canals reminiscent of Angkor Wat. It is likely that the Khmer constructed this city at some point in either the 12th or early 13th century CE, and one can still find a few remains of older Khmer structures at Sukhothai. In the 11th, 12th, and 13th centuries CE, the northern and central regions of what is present-day Thailand received an influx of people from what is now south-central China: the Tai.

These people intermarried with local inhabitants, like the Mon and Khmer people, and moved into the area in and around Sukhothai. (To outsiders, these people were known as “Siam,” from which the term “Siamese” is thus derived.) They established muang, tiny “city-states,” which were subordinate to Khmer rule. It is worth noting that these city-states formed a key juncture in history as the Khmer Empire began to decline after years of warfare with neighboring Champa in the late 12th century and early 13th century CE. A political vacuum in the region followed the death of Jayavarman VII (c. 1181-1218 CE), and the Tai quickly began to challenge Khmer political power in the region, asserting first autonomy and then complete independence from their Khmer overlords.

At the end of the 1300s CE, Sukhothai was one of the largest centers of Buddhism in the world.

In c. 1238 CE, King Si Inthrathit (also known in Thai as “Pho Khun Bang Klang Hao” and other through other honorifics) united several Thai polities under the control of Thai noblemen into a single kingdom under his suzerainty at the city of Sukhothai. (For this reason, the Thai see him as akin to the “founding father of the Thai nation.”) The exact circumstances of this event are shrouded in mystery and unfortunately historians only have fragments of broken stele and other partial records. What is known is that Si Inthrathit consolidated his rule and defended the Kingdom of Sukhothai against the Khmer. A younger son of Si Inthrathit, King Ram Khamhaeng (r.c. 1275-1298 CE), expanded the boundaries of the kingdom to the south and east, and formally adopted Theravada as Sukhothai's official religion. Ram Khamhaeng additionally sent envoys to China, helping to stimulate trade and enrich Sukhothai.

Sukhothai flourished over the next 150 years in large part due to its geographic location. Centered almost midway between the Khmer Empire to the southeast and the Burmese Kingdom of Pagan to the northwest, cosmopolitan Sukhothai thrived on commerce and patronage. Sukhothai and the neighboring city of Si Satchanalai (nowadays the Si Satchanalai Historical Park) became centers in the production and exportation of ceramics throughout Southeast Asia. While somewhat similar to Khmer stoneware or Vietnamese ceramics, the artisans of Sukhothai and Si Satchanalai produced pottery with a green-glaze ware, which attracted widespread admiration and can be found as far away as what is present-day Indonesia and the Philippines.

At the end of the 1300s CE, Sukhothai was one of the largest centers of Buddhism in the world. The successors of Sir Inthrathit and Ram Khamhaeng established beautiful Theravada temples and recruited Buddhist monks from afar to come and live in the city of Sukhothai. Of special note are King Lo Thai (r.c. 1298-1347 CE) and King Maha Thammaracha I or “Lu Thai” (r. 1347-1368 CE). Both were devout Buddhists and patrons of the arts who greatly enhanced the city's beauty through the construction of monumental architecture. During their reigns, a distinct style of Sukhothai art emerged, and Lu Thai wrote Thailand's most notable ancient work, the Traibhumikatha ("Sermon on the Three Worlds") in 1345 CE. Images of the Buddha, as reflected in sculpture or painting, became highly stylized and recognizable by virtue of their grace and elegance at Sukhothai. Sukhothai's temples as well delineate a certain ethereal grace with their bell-shaped stupas and lotus-bud finials. Architects and engineers came to Sukhothai to build exquisite monasteries of brick and decorated them with carved stucco.

The city of Ayutthaya grew quickly into the center of a vast kingdom that would ultimately absorb Sukhothai in 1438 CE.

Nonetheless, despite Sukhothai's wealth and fame, a rival Thai kingdom in the south challenged the city's political and cultural primacy in the region of present-day Thailand during the late 14th century CE: Ayutthaya (c. 1351-1757 CE). Lying on an island at the intersection of the Pa Sak, the Chao Phraya, and Lopburi Rivers and close to the Gulf of Thailand, the city of Ayutthaya grew quickly into the center of a vast kingdom that would ultimately absorb Sukhothai in 1438 CE. King Boromaracha I (r. 1370-1388 CE) was the first king of Ayutthaya to challenge Sukhothai, and subsequent kings from Ayutthaya gradually annexed or conquered territories belonging to Sukhothai. The later kings of Sukhothai acknowledged the supremacy of Ayutthaya in 1378 E, and the kingdom became a province of Ayutthaya in 1438 CE. Inscriptions from Sukhothai in the late 14 and early 15th centuries CE attest to a city and a kingdom beset with internal strife between various noble families, which in large part explains the kingdom's rapid decline. There have been suggestions too that Sukhothai's fortunes fell drastically when the Yom River changed its course, and the production of agriculture in the vicinity of Sukhothai fell.

Sukhothai gradually diminished in population size and in cultural importance, although its prized ceramics continued to be produced in and around Si Satchanalai. Sukhothai suffered repeatedly over the centuries due to intermittent warfare between Ayutthaya and Burma from the 16th-18th centuries CE, and wars with the Burmese, King Naresuan of Ayutthaya (c. 1590-1605 CE) forced many of Sukhothai's residents to relocate closer to Ayutthaya as a result of depopulation. Modern interest in Sukhothai arose again after the defeat of Ayutthaya and the relocation of the Thai capital to Bangkok in 1782 CE. Thai kings and archaeologists came to Sukhothai to study and admire its ruins in the 1800s and 1900s CE. Many of Sukhothai's renowned statues and other works of art are now at the National Museum in Bangkok, Thailand.

Sukhothai is an impressive and monumental ancient Buddhist city that can only be rivaled in Southeast Asia by Angkot Wat in Cambodia, the Buddhist temples of Bagan in Myanmar (Burma), the Hindu temples of Mỹ Sơn in Vietnam, and the ruins of Borobudur and Prambanan in Indonesia. The ruins of Sukhothai in art and architecture reflect the diverse ancestry of the modern Thai people as one finds styles and artistics influences from the Mon, Tai and Khmer peoples. Stylistic overlay from ancient India and Sri Lanka are also quite evident at Sukhothai. The total area of the historic town of Sukhothai is 11, 852 ha of which Sukhothai comprises 7,000 ha., Si Satchanalai comprises 4,514 ha., and Kamphaeng Phet comprises 338 ha.

A unique facet of Sukhothai that is little known or commented on is its amazing accomplishment in hydraulic engineering.

Large city walls running 2 km around Sukhothai once acted as a buffer from invading armies, and there were also three earthen ramparts and two large canals (or moats) that encircled the city. 20 medieval temples (Thai: wat) and countless monuments lie within the historic city of Sukhothai, the most impressive of which is undoubtedly the Wat Mahathat, which contains a statue of the Buddha, an old temple, and ornamental pond. Other structures of special interest include Wat Si Sawai, which is one of Sukhothai's oldest temples founded by the Khmer and dates from the late 12th century or early 13th century CE, and the 13th-century CE Wat Si Chum temple, which contains the largest Buddha image in Sukhothai and measures 15 m (49 ft) high and 11 m (36 ft) wide.

A unique facet of Sukhothai that is little known or commented on is its amazing accomplishment in hydraulic engineering. The medieval inhabitants of Sukhothai created reservoirs, canals, and sophisticated dams, which permitted increased control of waters during times of drought or flooding. The management of water on a large scale helped Sukhothai's farmers and merchants carry out a variety of activities of an agricultural, commercial, and ritual nature. This, in turn, lead to greater prosperity and more social harmony in the city of Sukhothai.

In the 19th century CE, Thais came to see Sukhothai as the first flowering of Thai culture and an important place in their cultural consciousness. Although the city of Sukhothai flourished for just under 200 years, it undoubtedly left an enduring mark on the subsequent course of Thai history and certainly Thai culture as well. When one thinks of the Thai alphabet, Thai architecture, and Thai sculpture, it is important to realize that they all had their genesis at Sukhothai. Thai school children still memorize the lines from a famous stone inscription that dates to c. 1298 CE and evokes Sukhothai's prestige:

Bangkok was once more commonly known as the Venice of the East...
Article

The Temple of the Emerald Buddha 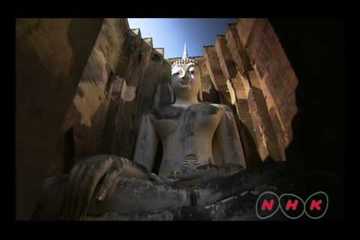 Sukhothai was the capital of the first Kingdom of Siam in the 13th...
Interview

Ancient History Encyclopedia has partnered with the UNESCO Archives...
Article

Any itinerary for a visit to Bangkok, Thailand would include some...
Image

A Buddhist temple, Sukhothai, Thailand. The Kingdom of Sukhothai...

Written by James Blake Wiener, published on 12 October 2018 under the following license: Creative Commons Attribution-NonCommercial-ShareAlike. This license lets others remix, tweak, and build upon this content non-commercially, as long as they credit the author and license their new creations under the identical terms. Please note that content linked from this page may have different licensing terms.