by Mark Cartwright
published on 14 January 2015

Available in other languages: Croatian, Spanish

Eleusis was a deme of Athens and most famous for its annual festival of the Mysteries in honour of Demeter and Persephone. The site was also an important fortress protecting Attica and held several other important festivals, notably the Thesmophoria, the subject and title of a comedy play by Aristophanes. The site continued to be an important religious centre through Hellenistic and Roman times, when the site was significantly expanded with monumental architecture being added by several Roman emperors.

In Greek mythology when Demeter was searching for her daughter Persephone, who had been abducted by Hades, she decided to rest from her weary quest at Eleusis. The daughters of the king, Celeus, offered to help the goddess who was disguised as an old woman. Recuperating in the royal palace, Demeter took a shine to Celeus' infant son Demophon (or Triptolemus) to whom she gave ambrosia and, each night in secret, she held the youth over a fire in order to make him immortal. Demophon's mother happened to see this one night and, misunderstanding the goddess' intentions, banished the old woman from the palace. Not best pleased, Demeter revealed her true identity and ordered Celeus to build her a temple. This was done, and the goddess retreated inside it and brought a terrible drought and famine upon the land, until the other Olympian gods revealed where Persephone was and agreed to release her from the underworld for half of the year. In thanks to Eleusis, the goddess blessed the land and taught the people sacred rites so that the Eleusinians might thereafter prosper both morally and physically. And so the Eleusinian Mysteries were born.

Settlement around the bay and plain of Eleusis began in the Bronze Age, c.1900 BCE, on the Thriasian plain, specifically, on the slopes of the east hill in the southwest corner. From the 16th century BCE the summit was inhabited, and in the 15th century BCE a temple to Demeter was first built coinciding with the reign of the legendary King Celeus, who first founded a sanctuary to the goddess in Homeric tradition. The name of the town derives from the mythical hero Eleusis, whose father was Ogygos, king of Thebes.

The most important festival at Eleusis was the annual Mysteries which were famed throughout the Greek world.

In the 7th century BCE Eleusis, always strategically important on the route to the Peloponnese, merged with Athens and became the deme of the tribe (phyle) of Hippothontis. In the 6th century BCE fortifications were constructed to enclose the Akris hill and sanctuary of Demeter and Persephone (Kore). The fortress was, along with Panakton and Phyle, one of the most important fortresses in Attica. There was also an important theatre of Dionysos constructed at the site. The most important festival at Eleusis was the annual Mysteries, which were famed throughout the Greek world, and c. 600 BCE they became an official ceremony in the Athenian calendar. Solon also aggrandized the site adding a new temple, the Telesterion (also known as the Solonian or Anaktoron for the inner, most sacred room), and enlarging the sacred precinct. During the reign of Pisistratus (550-510 BCE) Eleusis benefitted from the Pisistratan fortification wall with towers and a much larger Telesterion to better accommodate the ever-growing numbers of initiates to the Mysteries.

The site was destroyed during the Persian invasion of 479 BCE but rebuilt under Cimon. Another round of rebuilding was carried out in the 5th century BCE under Pericles, allowing Eleusis to boast the largest building in Greece when the Telesterion was rebuilt on an even bigger scale. Escaping any damage during the Peloponnesian War, the site was again expanded c. 360 BCE, which necessitated a larger protective wall, the "Lycurgan" Wall. At the same time the 6th century BCE Plutoneion building was replaced by a larger structure and the Portico of Philo added.

Besides the Mysteries (see more below), other important festivals at Eleusis during the Archaic and Classical periods included the Eleusinia (an important biannual games where the prizes were sacred grain), Thesmophoria (an all-female autumn festival in honour of Demeter when pigs were thrown into pits and left to putrefy; their remains were then mixed with seeds before sowing), Haloa (another largely all-female winter festival in honour of Demeter and Dionysos), Kalamaia, and the Proerosia.

In Hellenistic times a Macedonian garrison was stationed at Eleusis, and the Romans, starting with Hadrian, revamped the sanctuary from the early 2nd century CE and added a triumphal arch. Disaster struck when the Telesterion was destroyed in 170 CE by the Costobocs. The temple was rebuilt during the reign of Marcus Aurelius (161-180 CE), and the Roman emperor also oversaw the construction of a monumental gate, an exact copy of the Propylaea of the Athenian acropolis. Other Roman additions included a gymnasium, hostels, and baths. The sanctuary's fortunes declined significantly following the decree of Theodosius I to close down all pagan sites in 379 CE, and Eleusis was destroyed around 395 CE following the invasion of the Visigoths. The town continued to exist for a few more centuries, but the glory days when she enjoyed Pan-Hellenic stature were never to be regained.

The famous Mysteries of Demeter and Persephone held at Eleusis are just that, a mystery, as the initiated were forbidden from revealing any of the details of the ceremonies involved. We know that from the 6th century BCE, the ceremonies were held twice a year. The first step in the initiation process was known as the "Lesser Mysteries" and held every spring. The more important "Great Mysteries" were held in the autumn over nine days. Only Greeks could be initiated, although this was later expanded to include Roman citizens.

We also know details of some of the outdoor activities and that ceremonies were held under torchlight. There was a procession led by the priestess of Demeter along the Sacred Way from Eleusis to the agora of Athens and another return procession led by a symbolic chariot of Iacchus. There were ritual and communal cleansing and purification ceremonies carried out in the sea at Phaleron, the representation or re-enactment of the myths involving the two goddesses, animal sacrifices (pigs), and the interpretation of sacred texts by priests, the mystagōgoi. There was also probably drinking, music, dancing, and general revelry involved (as with many other such cults in Greek religion) as attested by pottery scenes of the rites which show initiates holding the "bacchus" or sacred rod. Closely associated with fertility and agriculture, the Mysteries probably brought worshippers good fortune and the promise of a better after-life.

The site today is dominated by the large trapezoid Roman court (56 x 54.5 metres), which has a marble slab paving and was the most important structure at the site, the Telesterion. First built in Mycenaean times, the building was rebuilt many times. Today's remains date to the 5th century BCE in plan and later Roman modifications following the destructive fire in 170 CE. We know that there were six entrances, a portico and 14-column stoa, and the upper floor originally had 42 columns. The encircling eight tiers of seats and column bases survive to give a good idea of the original floor plan.

The Greater Propylaea of Eleusis was a copy of the central portion of the monumental entrance to the acropolis of Athens. On the south side of the sanctuary, it had five doorways and was the main entrance. It had a flight of six steps leading to two porches with a façade of six Doric columns on each side and an inner vestibule with six Ionic columns. Decoration was provided via a frieze of triglyphs and metopes and a pediment showing the bust of an emperor (Hadrian, Antoninus Pius or Marcus Aurelius but too weather-worn to identify with certainty) which can still be seen at the site.

Only the foundations and restored parts of the ten column portico remain of the Northeast stoa. Some substantial pieces of the east triumphal arch, built using Pentelic marble, also survive which was once 16 metres high, 4.85 metres wide, and a replica of Hadrian's arch in Athens. Of the opposite arch on the western side only the base and a few fragments remain. Foundations of other structures still present include the northwest stoa, two exedra, the Temple of Artemis and Poseidon, the outdoor altars of Artemis and Poseidon, storage rooms and silos, treasury buildings, and the polygonal stone Kallichoron well. Parts of the Pisistratan wall also survive showing foundations, a section of flat stones, a layer of polygonal blocks of blue-grey Eleusinian stone, and a top layer of bricks.

Surviving art and sculpture from the site include relief panels showing Demeter and Persephone, clay votive plaques depicting rites from the Mysteries, a 5th century BCE statue of a fleeing Persephone from the pediment of the Sacred House, a caryatid from the Lesser Propylaea, a 2nd century CE life-size statue of Antinous, and a marble votive pig, all of which can be seen in the Eleusis Museum.

We want people all over the world to learn about history. Help us and translate this definition into another language! So far, we have translated it to: Croatian, Spanish

Demeter was one of the oldest gods in the ancient Greek pantheon...
Definition

Persephone (aka Kore) was the Greek goddess of agriculture and...
Article

The Rites of Eleusis, or the Eleusinian Mysteries, were the secret...
Definition 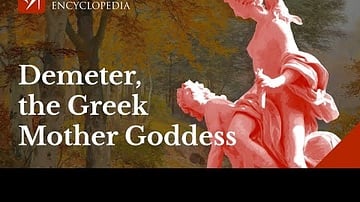 The Greek Goddess Demeter and the Eleusinian Mysteries

Demeter, the Greek goddess of agriculture, bread, and grain is...
Collection

The ancient Greeks believed the gods were an ever-present influence...

Submitted by Mark Cartwright, published on 14 January 2015. The copyright holder has published this content under the following license: Creative Commons Attribution-NonCommercial-ShareAlike. This license lets others remix, tweak, and build upon this content non-commercially, as long as they credit the author and license their new creations under the identical terms. When republishing on the web a hyperlink back to the original content source URL must be included. Please note that content linked from this page may have different licensing terms.