Arachne, from the Greek arákhnē (meaning spider), is a figure in Greek mythology whose talent for weaving was renowned and who famously challenged the goddess Minerva to a weaving competition. As told in Ovid’s (43 BCE-17 CE) Metamorphoses, Minerva weaved the brilliant stories of the gods, annoying Arachne, who was determined to prove that humans were better than the gods.

In stark contrast to Minerva, Arachne’s tapestry portrayed the sins that the gods had carried out against humans, and although it was magnificent work, it angered Minerva who humiliated Arachne and destroyed her tapestry. Realising what she had done and the great dishonour she had shown Minerva and the gods, Arachne grabbed a rope and ran from the house, intent on killing herself. However, Minerva had other plans for Arachne, turning her into a spider and ensuring that Arachne and her descendants would be cursed to weave webs for the rest of their lives. And so, the first spider (arachnid) came into existence.

Minerva is the Roman counterpart of the Greek goddess Athena, and in some versions of the myth, Athena is the protagonist instead of Minerva.

Arachne was the daughter of the widower Idmon, a merchant and craftsman who specialised in the trade of the highly prized Phocaean purple. They lived outside a small town called Hypaepa in the kingdom of Lydia (modern-day Turkey).

From an early age, Arachne showed exceptional skill as a weaver. Her skill was the pride of all Ionia, and admirers often crowded into her and Idmon’s small cottage to watch her work. Even the Nymphs were drawn from their homes on the River Pactolus and Mount Tmolus to witness her talent. The speed and accuracy of her work were a wondrous thing to watch: “(her skill was so graceful) as much as to look at the finished article.” (Metamorphoses, 6.18). She selected colours almost without thinking and was able to create the most life-like scenes of forests, beaches, mountains and palaces, causing her admirers to burst into applause whenever she completed another masterpiece.

The art of weaving & spinning was held in great esteem in the ancient Greek world.

The consensus was that Arachne had been given a gift only bestowed upon humans once every 500 years. However, despite all the praise she got for her work, Arachne remained a practical girl. She knew that she was fortunate to have been given this gift and did not claim personal credit for it, although she did recognise and value the talent she had been given.

The art of weaving and spinning was held in great esteem in the ancient Greek world. It was an integral part of society and human welfare as it provided the textiles for clothing and furnishing. However, the myth of Arachne is the first time weaving has had such a prominent role in Greek mythology.

One fateful afternoon, her pride getting the better of her, Arachne denied that she had been taught the art of weaving by the goddess of handicrafts (Minerva) and declared that Minerva should face her in competition to see who the better weaver was. “Let us hold a contest. If I’m beaten, I’ll pay any forfeit.” (Metamorphoses, 6.24-25).

Minerva disguised herself as an elderly woman and appeared at Arachne’s cottage, suggesting that she “yield the palm to Minerva, and humbly crave her forgiveness for boasting so rashly.” (Metamorphoses, 6.32-33). Angered by this advice and not recognising it was Minerva she was talking to, Arachne told the old woman to leave her alone and stated that she was determined to face Minerva. Arachne asks why Minerva has not appeared to face her yet. Minerva takes the opportunity to drop her old hag disguise. As the Nymphs and women pay homage to Minerva, Arachne keeps a straight face, refusing to panic and withdraw from the challenge. Arachne and Minerva get to work at the looms with a crowd excitedly watching them.

They moved their experienced arms, the labour lightened by pleasure. Webs were woven in threads of Tyrian purple dye and of lighter, more delicate, imperceptibly merging shades. (Metamorphoses, 6.60-62).

Minerva weaved the epic story of the Olympian gods and goddesses, portraying each one in a splendid light: majestic Jove (Zeus), striking Neptune (Poseidon) and victorious Minerva (Athena). Then, she went one step further and, in each corner of the tapestry, showed humans who had tested the will of the gods and been punished as a result. Finally, Minerva finished off her tapestry by adding a border of olive tree branches – a symbol of peace and a tree that was sacred to her.

In reply, Arachne’s tapestry featured the stories of humans, especially women, who had been wronged. There were the women the gods had deceived: Europa, Leda, Antiope, Danaë and Alcmene, among others. And there were the gods themselves, committing their many sins: Jove, Neptune, Bacchus and Saturn, all transforming from one figure to another in their pursuit of mortal women; the very embodiment of deception and cunning.

To finish her tapestry off, Arachne added flowers and ivy to the tapestry’s border. Arachne’s tapestry was breathtaking work. Not even Minerva could deny the proof of her talent when it was right in front of her.

The fair-haired warrior goddess resented Arachne’s success and ripped up the picture betraying the gods’ misdemeanours.

She was still holding her shuttle of hard Cytorian boxwood

Feeling ashamed, Arachne fastened a rope around her neck, intending to end her life rather than feel the embarrassment of being publicly humiliated by the goddess. Minerva took pity on Arachne and saved her from the noose, instead splashing a potion over Arachne. At once, Arachne transformed into a spider.

Her hair fell away, and so did the ears and the nose.

Arachne and her descendants were now cursed to spin meaningless webs for the rest of their lives. In addition, Arachne’s ability to create beautiful art with meaning has been taken away from her as punishment from Minerva.

Throughout history, legendary and mythological figures have been used as examples of either virtue or a moral failing. The story of Arachne and Minerva is no different.

Traditionally, most critics viewed the myth as just another Greek story of immortal retribution and mortals being put in their place. Arachne dared to offend the gods and portray them in a negative light, and so she was punished for it. While a more modern interpretation looks at it from a feminist point of view, Arachne stands up to the patriarchal society that is so prevalent in the ancient world, especially in the ancient Greek myths. Why should she keep quiet about the gods' many misdeeds? Even though Minerva is a female, as a goddess and the daughter of Jove, she still represents the male-dominated Olympian tradition and is an opponent to Arachne in more ways than one. Ovid’s version of the story seems to support both of these perspectives.

Minerva is offended by Arachne’s tapestry as it challenges the authority of the gods.

Arachne’s tapestry blatantly criticises Olympus and the power Minerva represents. Rather than portray the much-loved and popular birth and heroic stories of the Olympian gods, as would be expected in the ancient Greek world and for such a magnificent piece of work, Arachne weaves their crimes against mortal women, unashamedly portraying them in a negative light. Minerva is offended by Arachne’s tapestry as she views it as a message that directly challenges the authority of the Olympian gods. Arachne persists in challenging Minerva and refuses to back down, which ultimately leads to her downfall and the destruction of her tapestry.

In modern times, the story of Arachne has influenced many aspects of popular culture. She is featured as a character in numerous fantasy books, TV series and movies. Arachne can be found in the Heroes of Olympus book series by author Rick Riordan, in a season 6 episode of the popular CW show Supernatural, in a season 4 episode of Hercules: The Legendary Journeys and even in the first issue of the much-loved Marvel Comic Book series. Dante Alighieri (1265-1321), the Italian poet and author, briefly mentions Arachne to describe the appearance of the fearsome monster Geryon in Inferno, the first part of his renowned The Divine Comedy.

The story of Arachne and Minerva (Athena) is the focus of the well-known painting Las Hilanderas (The Fable of Arachne or The Spinners) by Spanish artist Diego Velázquez (1599-1660). Velázquez’s painting vividly portrays the world of ancient weaving; not only are the viewers focused on the battle between Arachne and Minerva and the finished tapestry, but their eyes are also drawn to the raw materials (wool) and the hard work that goes into making tapestries.

Arachne is also the name of a flight experiment that will be undertaken by the Air Force Research Laboratory (AFRL) in 2025. The experiment is instrumental for building an operational solar power transmission system and will be the first free-flying flight experiment in history.

Liana Miate
Liana is the Social Media Editor for Ancient History Encyclopedia. She holds a Bachelor of Arts Degree with a major in ancient Greece, Rome & Late Antiquity. She is particularly passionate about Rome and Greece, and anything to do with mythology or women.

Arachne or Dialectics painted in 1520 by Italian Renaissance painter...
Image

The Spinners or The Fable of Arachne By Velázquez

The work represents the moment in which the weaver Arachne was...
Definition 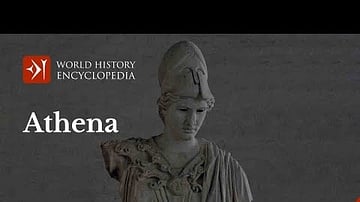 Athena the Greek Goddess of Wisdom, War and the Crafts

Athena was the Greek goddess of wisdom, war, strategy, the crafts...

Submitted by Liana Miate , published on 26 July 2022. The copyright holder has published this content under the following license: Creative Commons Attribution-NonCommercial-ShareAlike. This license lets others remix, tweak, and build upon this content non-commercially, as long as they credit the author and license their new creations under the identical terms. When republishing on the web a hyperlink back to the original content source URL must be included. Please note that content linked from this page may have different licensing terms.