Available in other languages: Turkish

Saturn (Saturnus) was a Roman god with a similar history to Cronus from Greek mythology. Often depicted in art wielding a scythe he was considered an agricultural god, especially associated with seed-corn. The Saturnalia festival, named after him, was one of the most important and lively events in the Roman calendar and the god also had a major temple dedicated to him in the Roman Forum of Rome.

Greek and Roman mythology are interwoven, and to many, they appear to be one and the same. While the names of the gods and goddesses may be different - Zeus morphed into Jupiter while Hades became Pluto - their diverse roles and positions in society are fairly consistent. From the time the Romans first made contact with the Greeks, their society would never be the same, becoming Hellenized, albeit reluctantly. The Romans admired all that was Greek. The wealthiest and most powerful families of Rome would even hire Greek tutors for their male children. The Republic's (and later Roman Empire's) literature, art, philosophy and foremost, religion would be changed forever. One of the best and earliest examples of this religious transformation would revolve around an outcast - a god driven out of Greece but finding a home on the hills of Rome. His name was Saturn.

Some authors believe Saturn existed in Roman mythology long before the “invasion” of Greek religion and associate him with the Etruscan god Satre; however, whether this is true or not is entirely speculative. As the Greek religion became more Romanized, Saturn or Saturnus, often pictured holding a scythe, became more closely associated with the Greek god Cronus, the lord of the universe and the god who devoured his own children. He was son of Uranus (sky) and Gaea (earth). After Zeus and his brothers (Poseidon and Hades) became victorious over the Titans, Saturn was expelled from the home of the Greek gods, Mt. Olympus.

According to ancient myth, Saturn ruled Latium wisely during its golden age.

According to legend, Saturn settled in Latium on the future site of Rome. His arrival was welcomed by the Roman god Janus, the two-faced deity, the god of the beginnings and ends. Saturn quickly established himself there, even founding the nearby city of Saturnia. According to ancient myth, Saturn ruled Latium wisely during its golden age, a time of great prosperity and peace. It was during this time that he became more closely associated with agriculture (as a god of seed-corn) - hence the reason for his typical depiction in art holding a scythe. He instructed the people on the basic principles of farming and viticulture (the production of grapes). He also helped the locals to rid themselves of their “barbaric” customs and instead adopted a more civic and moral lifestyle.

While historians argue over the origins of Saturn and his role in Roman mythology, his place in Roman history is remembered for two items: his temple and his festival - the latter being one of the most anticipated festivals of the many on the Roman calendar. His temple, built around 498 BCE, was located at the foot of Capitoline Hill and housed the Roman treasury as well as the records and decrees of the Roman Senate. Falling into disrepair, it would be rebuilt during the reign of Emperor Augustus. His festival, the Saturnalia, was celebrated in December from the 17th to the 23rd and was connected to the winter grain sowing. (There are some who place the festival in August). Although Emperor Augustus reduced the length of the festival to three days - Caligula and Claudius later raised it to five - most people ignored the decrees and still celebrated it for the full seven days. As part of the calendar of Numa, the second king of Rome, the festival immediately preceded the festival of Ops, Saturn's partner or consort and the goddess of the harvest - she became associated with the Greek goddess Rhea. Saturn was also linked to another ancient Italian deity, Lua.

The festival was like many others where time was spent eating, drinking, and gaming - there were plenty of games and banquets (Christian historians question whether or not there were gladiators and human sacrifice). Presiding over the festival was a mock king, the King of Misrule, or Saturnalicius princeps. Gifts were exchanged, usually candles or pottery figurines. However, during the week of celebration, slaves were awarded a unique opportunity. They were given a limited amount of freedom. For one, they did not have to wear the traditional felt hat or pilleus. Leisure attire was also permitted and, uniquely, the master and slaves reversed roles. Slaves gave orders to the masters, and masters waited on slaves. The festival would endure into the Christian era when it would assume a new identity and name - Brumalia.

Today the festivals and celebration are long gone and, like many of the other Greek and Roman deities, their names belong only on the pages of a dusty, old book. However, a few, like Saturn have achieved some sense of immortality. We remember Saturn in two ways, for one he ends our busy work week - Saturday. And, as we look to the sky, on occasion, we can see the sixth planet from the sun - Saturn.

We want people all over the world to learn about history. Help us and translate this definition into another language! So far, we have translated it to: Turkish

Donald L. Wasson
Donald has taught Ancient, Medieval and U.S. History at Lincoln College (Normal, Illinois)and has always been and will always be a student of history, ever since learning about Alexander the Great. He is eager to pass knowledge on to his students.

The Saturnalia was an enduring Roman festival dedicated to the...
Article

The 4th century CE Temple of Saturn is situated in the north west...
Definition

In many societies, ancient and modern, religion has performed a...
Definition 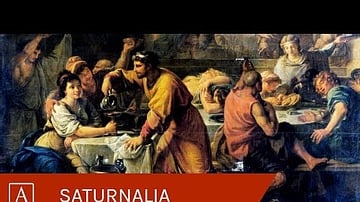 The Ancient Roman Festival of Saturnalia began as a one-day festival...
Definition

Chitrali mythology developed in the region of Chitral, the tallest...

Submitted by Donald L. Wasson, published on 16 October 2015. The copyright holder has published this content under the following license: Creative Commons Attribution-NonCommercial-ShareAlike. This license lets others remix, tweak, and build upon this content non-commercially, as long as they credit the author and license their new creations under the identical terms. When republishing on the web a hyperlink back to the original content source URL must be included. Please note that content linked from this page may have different licensing terms.