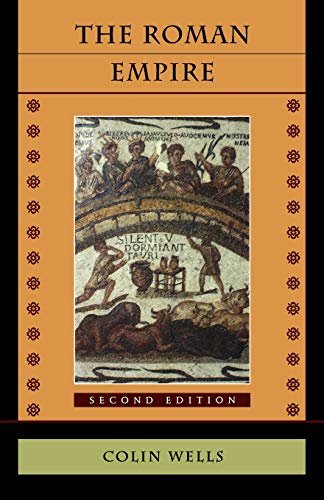 Colin Wells offers a new take on the history of the Roman Empire by using archaeological evidence to supplement the literary sources in this updated version of his original book published in 1984. Intended for college-level students, this book brings together the grand narrative of how the Roman Empire came to be and the social and cultural aspects that made it successful. Despite its age, this book is still one of the best renditions of the political history of the empire.

In 1995, Colin Wells published the second edition of his 1984 book, The Roman Empire, with the express goals of including newer theories, updating the "Suggestions for Further Reading" section, and correcting various editorial mistakes. The purpose of the book was to provide an overview of the early to mid-Roman Empire (44 BCE-235 CE) for college-level students. The first four chapters focus on Augustus and the beginnings of the empire. Chapters five through eight look at the political and cultural changes to the empire after Augustus’s death in the 1st century CE. Chapters nine and ten focus on the 2nd century, and chapter eleven studies the empire under Commodus to Maximinus. The odd-numbered chapters advance the overarching political narrative of the empire, and the even-numbered chapters delve deeper into topics not covered in that narrative.

Wells draws out a clear narrative of the political history of the Roman Empire.

In organizing his book this way, Wells draws out a clear narrative of the political history of the Roman Empire, from how Augustus needed to find a precedent for his new powers in Republican law to Caracalla inheriting the throne solely because he was Septimius Severus’s son. The even-numbered chapters, such as chapter six on the army and the provinces, offer worthwhile insights into the culture and society of the empire that supplement the broader narrative well; their true value is in being read individually.

I would recommend this book but with some caveats. Readers today may find that the discussions of some subjects, such as the lives of enslaved people and the non-elite, which are of particular interest currently, are not as robust as those in more recently published books. In particular, Wells’s treatment of women in the empire is completely lacking in substance, and he does not question the reliability of the literary sources (such as Tacitus, whose account of the women of the imperial family is biased against them) as he does on other topics. These are moments in which this book shows its age.

To his credit, however, Wells does not repeat the same narrative of the Roman Empire that has remained predominant for so long. He offers a fresh look at the empire using archaeological evidence to bolster our understanding of aspects not covered in the literary sources. Some of the most useful insights he offers are the issues and benefits of the sources, about which he writes “we must not forget, in dealing with the ancient world, that much of the selection has been done for [the historian]. There is much that we should like to know, and many questions that we can ask, to which there is no answer. The evidence is simply not there” (48). He also breaks from previous scholarship or the mainstream narrative of the empire at valuable moments, challenging the idea of an empire in decline from the 2nd century on and putting a focus on the provinces, which have often been neglected in similar overviews of the empire.

This book focuses very much on the early empire (we do not enter the 2nd century CE until the end of chapter seven), which can leave the reader feeling unbalanced. Wells’s discussions of the early empire are some of the most useful chapters. In them, he clearly lays out the political maneuvering that created the empire and the drastic changes that occurred in the 1st century CE regarding the political systems. Overall, he expertly weaves the literary and archaeological evidence together to paint a very convincing and comprehensive picture of the political, social, and cultural aspects of the Roman Empire in its earlier years.

$52.86
free shipping worldwide
$20.29
plus shipping
By purchasing books through this website, you support our non-profit organization. World History Encyclopedia receives a small commission for each book sold through our affiliate partners.

Alex Hagler
Alex is a Master's student at the University of British Columbia, with a specialty in the archaeology of the Roman Empire, particularly topics of religious change and cultural exchange. They also taught History and Latin (grades 6-12).

Batavian revolt was a rebellion of the Batavians against the Romans...
Article

$52.86
free shipping worldwide
$20.29
plus shipping
By purchasing books through this website, you support our non-profit organization. World History Encyclopedia receives a small commission for each book sold through our affiliate partners.