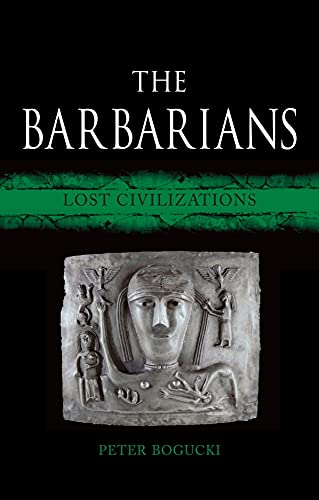 This beautifully illustrated volume constitutes a short overview of mainly Northern and Central European "barbarian" cultures, identified by their initially preliterate civilizations and their cultural distance from the Classical civilizations of Greece and Rome. This book was written for the general reader with a deep interest in ancient European history and is accessible for college and even higher-level high-school students while remaining pleasurable for postgrads.

Barbarians. The name itself calls to many minds the image of naked, painted, shrieking Celtic warriors rushing headlong into armored Roman legions, managing to lose the entirety of Gaul to Caesar as a result. But the term and the specific peoples known now as 'Celts' are largely avoided in Peter Bogucki's The Barbarians, a decision attributed to a somewhat contradictory reasoning “that the Celts represented only some of the Barbarians [i.e., Europeans not belonging to the Classical, Greco-Roman societies] of temperate Europe,” a notion which seems abundantly obvious, but which is then somewhat blurred by the author's reference to a paradoxical “diversity of uniformity.”

Why examining in detail the cultural, religious, political and geographical differences between widely different cultures should be swept under the academic rug seems a somewhat alien concept, but Bogucki's is a strictly archaeological rather than anthropological perspective, and this generally makes sense given the chasm between literary and architectural remains that generally exists between the Barbarian and Classical cultures.

Bogucki concentrates on a set number of Barbarian themes: innovation (the eventual mastery of materials from wood to flint, bronze to iron); connectedness (long-distance travel for trading purposes); enclosure (the building of defensive infrastructure such as ramparts and palisades); monumentality (the creation of unprecedented and thus deeply impressive to the public of megalithic tombs, standing stones, barrows and so forth); ritual (the introduction/imposition of ritual belief systems); wealth (the gradual hegemony of among societal elites); and finally, and perhaps most difficult to determine from the archaeological record, the lives of ordinary people without whose whose farms, pastures, and workshops neither Barbarian nor Classical cultures could have existed.

Bogucki details how the Barbarians' legacy, while much harder to trace & define, is every bit as important as their Mediterranean brethren.

Bogucki launches his narrative circa 2300 BCE, in England's Salisbury Plain, with a detailed introduction to the unearthed Amesbury Archer, possibly a warrior or hunter buried with arrowheads, copper knives, ceramic vessels, boars' tusks, and two enigmatic gold ornaments thought to be hair or ear adornments. From there he takes us on a grand tour, from the Alpine 'Ice Man' to Stonehenge and the accession of the Bronze Age, when the mounting sophistication of seagoing vessels in northern Europe allowed for increased interaction among distanced peoples and exchanges of goods and perspectives.

Around 1200 BCE came the Iron Age, a 'seamless' transition from the Bronze, according to Bogucki, and Barbarian and Classical cultures, through mutually expanding power centers, came face to face. After a fascinating and gruesomely illustrated section on the bog body sacrifices of Northern Europe, Bogucki takes us to the middle of the 1st century CE, Caesar's vanquishment of Gaul. From this point in the book, Roman conquests play a major role, though he makes it clear that there were a great many powerfully functioning societies beyond Roman control. Finally, Bogucki provides a fine description of the most singular disruption of Roman plans for Europe with the sudden and devastating arrival of the Huns from the distant plateaux of Central Asia.

Peter Bogucki's The Barbarians: Lost Civilizations is a beautifully bound and illustrated work of approachable scholarship, written in a somewhat dry manner (at least given the subject matter) but ably covering the most significant events in early European history from a learned and always interesting perspective. Bogucki details how the Barbarians played a role equal to that of the Classical civilizations in the creation of European culture, and their legacy, while necessarily much harder to trace and define, is every bit as important and lasting as their Mediterranean brethren.

$23.64
free shipping worldwide
$22.76
plus shipping
By purchasing books through this website, you support our non-profit organization. World History Encyclopedia receives a small commission for each book sold through our affiliate partners.

The Huns were a nomadic tribe prominent in the 4th and 5th century...
Definition

The ancient Celts were various tribal groups living in parts of...
Definition

Roman Gaul is an umbrella term for several Roman provinces in western...

$23.64
free shipping worldwide
$22.76
plus shipping
By purchasing books through this website, you support our non-profit organization. World History Encyclopedia receives a small commission for each book sold through our affiliate partners.