by Jessica Settergren
published on 17 July 2017 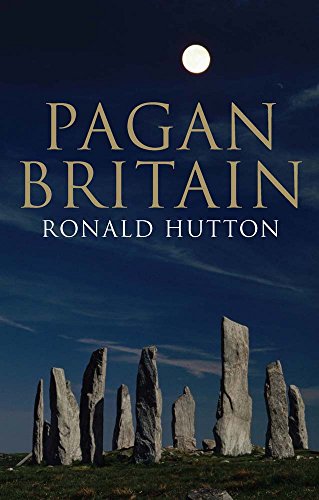 I highly recommend this for anyone interested in the history of modern Paganism and anyone interested in prehistoric Britain. The complexity and depth of Hutton's writing have me recommending this to higher level readers: I marked it "Medium" but it is really on the edge of "Medium" and "Hard" due to the density of information included. Pagan Britain uniquely crosses scientific and religious lines with fascinating detail.

The intersection of science, speculation, and religion is a perilous space for any book to occupy. Considering the relative youth of archaeology and the current versions of Pagan faiths based on pre-Christian systems, Ronald Hutton's Pagan Britain could have easily bent science or religion to fit his own theories on either subject. Thankfully, he did not. It has taken me a while to write this because I have been considering both the book and the review from two very different viewpoints in deciding which to highlight. I have concluded that following Hutton's lead is the fairest path, and so I will attempt to give recommendations for both.

From a scientific perspective, Pagan Britain examines every major archaeological conclusion regarding the British Isles (and the Republic of Ireland where applicable, i.e. the history of Druids and the Invasion mythological cycle) with a critical eye. Every assumption made by archaeologists, geologists, historians, archaeoastronomers, anthropologists, and linguists is questioned. Nothing considered 'true' or accurate fact is left unexamined, including the expertise of the early archaeologists and scientists studying the subject. The approach could seem like a pretentious challenge to the capability of those who studied before, but the tone of the writing is that of enthusiastic evaluation and discovery. Far from condescending, Hutton's assertion is that all conclusions about the historical data, including his own, could change as more information is unearthed.

It is refreshing to find someone so willing to truly question everything we think we know about every society living in the British Isles before Rome started recording history. Hutton cross-references with multiple ancient sources and cautions the reader to take even those with a healthy dose of critical thinking. From the oldest cave burials to stone circles to Tors, Hutton speculates on artefacts' purpose and significance and calls out assumptions (his own and others') as mere conclusions based on what little evidence is available.

Hutton begins at 6,000 BCE and works his way forward. The first half of the book covers prehistory leading to the Iron Age and Britain's interactions with Rome. It is in this portion of the book Hutton describes the growth spurts and pains of the sciences that investigate human history, and debunks some oft-quoted myths about monuments. His writing smoothly integrates the physical history of the landscape in tandem with the evolution of archaeology from the 18th-century CE antiquarian study to modern science. He then delves into the intersections of cultures, peaceful and otherwise, that influenced Paganism: from the Celtic Iron Age myths to medieval and Renaissance Christianity to the scientific discoveries made as late as the 21st century CE. From a purely scientific and historical perspective, anyone interested in the prehistory of Britain will get loads of valuable information out of this book.

Pagan Britain is also decidedly written as a scientific-based history of the modern Pagan religions originating in the Isles. For purposes of this review, and corresponding space constraints, please allow me to encompass various terms used today to describe the modern offshoots of pre-Christian religions (Neo-Pagan, Celtic, Wiccan (of various style), Druidism, etc.) under a single umbrella term of Pagan/Paganism.

It is clear Hutton's intention is to give serious practitioners a solid historical evolution of the modern belief systems. He touches everything that could influence Paganism: the scanty records of Celtic religious practices, the introduction of Roman culture to Britain, the spread of Christianity, the various linguistic shifts due to population migrations, and the changing mythologies. Everything is considered critically. For example, he reminds the reader that literacy was primarily a skill of Christian Monks in post-Roman Europe, the religious influence of the writers of the Book of Kells and other monastery-illuminated works should be included in any critical review of myth.

His work is not limited by the constraints of current nations. He discusses how the history of seasonal celebrations, mythological cycles, topography, and sociological changes all worked together to create a backdrop for the modern traditions based in the British Isles and Ireland. The history behind the myths and the causal factors for traditional ceremonies are valuable to anyone seriously studying a religion or spiritual system, and this book does a fantastic job of balancing science and speculation. Hutton's work is as objective, thorough, and multi-disciplined as I have ever read on Celtic or British-Isles-based Paganism. Pagan Britain is a must-read for any serious student or practitioner on the level of The White Goddess and should be in any Pagan library as a valuable reference.

Regardless of the reader's interest in the subject, this is the sort of reading best described as chewy. It is not easily digested in a single sitting. Pagan Britain is not a book to be casually read while paying attention to other things; it is so packed with information it is nearly a textbook, written without a stuffy textbook tone. There is palpable respect for those who interpreted before him: he is not out to disprove anyone but to look again without preconceived notions. His willingness to re-examine every assumption provides the reader with an opportunity to look at the evidence with fresh eyes, to question and conclude for themselves. While the complexity has me recommending this to higher level readers, I can say Pagan Britain is a fascinating and valuable resource for a variety of scholars.

$30.14
plus shipping
By purchasing books through this website, you support our non-profit organization. World History Encyclopedia receives a small commission for each book sold through our affiliate partners.

The Book of Kells (c. 800 CE) is an illuminated manuscript of the...
Definition

Illuminated manuscripts are, as their name suggests, hand-made...

$30.14
plus shipping
By purchasing books through this website, you support our non-profit organization. World History Encyclopedia receives a small commission for each book sold through our affiliate partners.
Remove Ads