by Amanda Rundle
published on 26 September 2022

The Sainte-Chapelle in Paris was originally consecrated as a private royal chapel in 1248 during the reign of King Louis IX of France (r. 1226-1270), who was known in life as rex christianissimus ('most Christian king') and canonized in death as St. Louis. Visually stunning, the chapel is packed with political and religious symbolism to communicate and legitimize the power of Louis IX and the Capetian Dynasty.

Louis IX was born in 1214 as the second son of King Louis VIII of France (r. 1223-1226) and Blanche of Castille. After the death of his older brother, Prince Philip, in 1218, Louis IX became the heir apparent of France's throne. In 1226, King Louis VIII died unexpectedly of illness while returning from a military campaign, which made Prince Louis king of France at just 12 years of age. After his father's unexpected death, Louis IX was rushed to Reims Cathedral, where the kings and queens of France are crowned, for his coronation and anointment. This ritual occurred quickly to prevent other French nobles from taking advantage of the power vacuum created by the death of Louis VIII and attempting to claim the crown for themselves.

Sainte-Chapelle presents King Louis as both the one true king of France & a contemporary equivalent to the kings of the Old Testament.

Louis IX was a member of the Capetian Dynasty, and although the family had maintained their power as the royal family of France for centuries, there remained existing power struggles among the nobility - particularly in the northern regions of Brittany and Normandy. As France was ruled by the boy-king Louis IX, and the Spanish-born regent, Queen Blanche of Castille, there were fears of increased claims being made on the French throne and rebellion incited by ambitious members of the nobility. At this time, there was also increasing importance placed on the values and morals promoted by Christianity and the Bible among the nobility and laypeople alike. By aligning himself with Christianity, Louis IX would be able to legitimize his power as king from a religious source in addition to the dynastic legitimacy he was already seen to possess. In this way, Louis IX would be able to maintain his political power by presenting himself as the one true ruler of France both to the people, and fellow nobles that could potentially challenge his rule.

During the early years of Louis IX's rule, Blanche of Castille began to establish religious policies that would be carried through Louis IX's reign such as receiving Dominican and Franciscan orders of monks in Paris, the political and intellectual centre of Capetian dynastic rule. Additionally, Blanche recruited religious teachers for Louis during his youth, and the values instilled by these teachers remained significant to the pious Louis for the remainder of his life and reign. Louis IX's piety was both spiritually and politically significant, inspiring him to both embark upon a crusade later in his reign and commission the Sainte-Chapelle, a highly symbolic space that presents King Louis as both the one true king of France and a contemporary equivalent to the kings of the Bible's Old Testament.

Crusades & Acquisition of the Relics

In 1239, Louis purchased several relicss said to have been used during the crucifixion of Christ:

Sainte-Chapelle was commissioned to house these relics, which were both spiritually and politically significant because they were believed to enable personal and spiritual dialogue with Christ himself. When Louis IX brought these objects to France, it was seen as a sign that France was the location specifically chosen by God to be the new Holy Land, with Louis IX as its rightful ruler. The archbishop of Sens expressed this very idea:

Much of Louis IX's sainthood can be attributed to his successful military efforts in the Seventh Crusade (1248-1254). The crusades were a series of religiously-motivated campaigns endorsed by the papacy, which sought to reclaim the Holy Land and particularly Jerusalem from Islamic rule. The goal of these campaigns was to re-establish Christian rule in the region. Louis IX was inspired to embark upon a crusade after recovering from a serious illness to give thanks to God, despite the reputation of the crusades being disastrous and costly in the public eye. In describing the motivations of the king, Brother William of Chartres wrote:

Though he was pressed down by the pains of great bodily suffering, his spirit soared in hope of the desired reward. The previous night he had been heard saying in French "We will go to Jerusalem." (Gaposchkin, 149)

This dedication to his faith would eventually be seen in the eyes of the public as proof of Louis IX's faith and his legitimacy as a king.

Built to house the relics, Sainte-Chapelle is both monumental in scale and beautiful, but it is also a testament to the lengths to which the king was willing to go in order to demonstrate his legitimacy as a ruler. The monumental stained glass windows – still largely composed of the original medieval glass – present scenes from Christian history in chronological order from the Book of Genesis up to and including Louis IX's acquisition of the relics.

The only direct depiction of Christ in the glass program is the Passion Window, which depicts the Passion of Christ and the crucifixion. Imagery in the other windows presents scenes from the Old Testament or presents Louis IX as the successor to Christ's legacy on earth. In the Relics Window, King Louis IX is pictured carrying The Crown of Thorns in procession. Positioned directly across from the Genesis Window, it equates the beginning of the events of the Bible with the new beginning offered through the salvation offered by Christ and Louis IX who was believed to continue this legacy by bringing the relics of the Passion to France.

Showing Louis IX surrounded by scenes from the Old Testament, the connection between Louis IX and the kings of the Old Testament could have been made within the minds of medieval viewers. By appealing to the faith of his subjects and the religious stories with which they were familiar, Louis IX was able to position himself as a figure of both religious and political authority.

Besides the Old Testament references in the glass program, the dimensions of Sainte-Chapelle also echo King Solomon's Hall of Justice as described in the Book of King. The Temple of Solomon held the Ark of the Covenant, and by constructing Sainte-Chapelle to these same dimensions, the relics of the Passion were directly compared to the Ark of The Covenant, and Louis IX to King Solomon.

The throne had six steps, and its back had a rounded top. On both sides of the seat were armrests, with a lion standing beside each of them. Twelve lions stood on the six steps, one at either end of each step. (1 Kings 10:19-20)

The key elements a medieval viewer would recognize would be the images of two lions at the base of the grande chasse, and the six steps leading up to it. Although the grande chasse was not a throne itself, by consciously calling upon the imagery of the kings of the Old Testament it functioned as a means to elevate the kings of France to possess both political and religious status. The allusions to the Throne of Solomon symbolically positioned France as New Holy Land and the Sainte Chapelle as the new Temple of Solomon.

The chapel stood apart from other buildings on Paris' Île de la Cité because it is almost equal in height to Notre-Dame on the other side of the island and would have stood out against the medieval skyline of the city. Unlike Notre-Dame, Sainte-Chapelle was a private chapel located within the Capetian Palace complex, and access to it would have needed to be granted to the public by the king; however, visitations to the chapel by the public were encouraged by the granting of papal indulgences that would take place at the chapel. Indulgences were significant because they lessened the time one would spend in purgatory for their sins and were cumulative with ongoing participation, which would have motivated people to visit the Sainte-Chapelle often.

Not only did indulgences benefit the monarchy in the form of donations but they also encouraged the celebration of feasts and holy days at the Sainte-Chapelle, which would increase engagement with the chapel's symbolic imagery. This engagement would publicize Louis IX's acquisition of the relics and allow Louis IX to be known as a religious figure in addition to a king. Given that the kingdom would have initially disapproved of Louis IX's decision to embark upon a crusade because of its associations with failure and the stress it placed on the kingdom because of its expense, the legitimacy of such an endeavour would need to be infused with justification from a higher religious source. By aligning himself, and his family with the ancient kings of the Old Testament, such as King Solomon, Louis IX would offer legitimacy to his motivations for reclaiming the Holy Land as the successor of that spiritual legacy.

Why did King Louis IX build the Sainte-Chapelle?

The Sainte-Chapelle was built to house the relics of Christ's Passion that Louis IX acquired, as well as to legitimize Louis IX's rule by associating him with the kings of the Old Testament.

What does the Sainte-Chapelle symbolize?

The imagery of Sainte-Chapelle symbolizes a connection between Louis IX and the kings of the Old Testament and presents France as the new Holy Land, with Louis IX as its rightful ruler.

Amanda Rundle
I am a recent philosophy graduate who has always been fascinated by history. My primary interests are the Roman Republic, medieval Europe, and the eighteenth century. 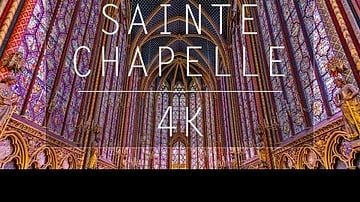 The Crusades were a series of military campaigns organised by popes...
Article

The crusades of the 11th to 15th century CE have become one of...
Article

Trial and Execution of Louis XVI

Throughout the 9th century CE, Viking raids on the region of Francia...

Submitted by Amanda Rundle, published on 26 September 2022. The copyright holder has published this content under the following license: Creative Commons Attribution-NonCommercial-ShareAlike. This license lets others remix, tweak, and build upon this content non-commercially, as long as they credit the author and license their new creations under the identical terms. When republishing on the web a hyperlink back to the original content source URL must be included. Please note that content linked from this page may have different licensing terms.