by Rebecca Denova
published on 18 February 2022

The story of the ten plagues of Egypt is found in chapters 7-12 of the Book of Exodus. The story depicts the natural disasters sent by the God of Israel to convince Pharaoh to let the Hebrew slaves leave Egypt. The narrative purpose of the plagues was to demonstrate that the God of Israel was more powerful than the priests and gods of the Egyptian religion.

The ten plagues of Egypt are:

Moses & Aaron facilitate the ten plagues, with the voice of God as the narrator of each.

God commissioned Moses at Mount Sinai to go to Egypt to tell Pharaoh to "Let my people go, so that they may worship me in the wilderness." (Exodus 7:16). God provided Moses with some magic tricks of his own and told him that his brother Aaron would help speak for him. Together, Moses and Aaron facilitate the ten plagues, with the voice of God as the narrator of each. Bur as Moses was ready to leave, God told Moses, "I will harden his [Pharaoh's] heart so that he will not let the people go" (Exodus 4:21). This hardening of Pharaoh's heart is a narrative literary device to set the background for the stories of the continuous plagues.

Moses and Aaron approach the river and dip their staffs into it.

With the staff that is in my hand I will strike the water of the Nile, and it will be changed into blood. The fish in the Nile will die, and the river will stink; the Egyptians will not be able to drink its water. (Exodus 7:17-18)

The Nile will teem with frogs. They will come up into your palace and your bedroom and onto your bed, into the houses of your officials and on your people, and into your ovens and kneading troughs. (Exodus 8:3)

Stretch out your rod, and smite the dust of the land, that it may become gnats throughout all the land of Egypt. (Exodus 8:16)

If you do not let my people go, I will send swarms of flies on you and your officials, on your people and into your houses. The houses of the Egyptians will be full of flies; even the ground will be covered with them. But on that day I will deal differently with the land of Goshen, where my people live; no swarms of flies will be there, so that you will know that I, the Lord, am in this land. (Exodus 8:21-22)

This becomes a pattern where the plagues only harm the Egyptians and not God's people.

If you refuse to let them go and continue to hold them back, the hand of the Lord will bring a terrible plague on your livestock in the field—on your horses, donkeys and camels and on your cattle, sheep and goats. (Exodus 9:2-3)

Take handfuls of soot from a furnace and have Moses toss it into the air in the presence of Pharaoh. It will become fine dust over the whole land of Egypt, and festering boils will break out on men and animals throughout the land. (Exodus 9:8-9)

Thunderstorm of hail and fire

Therefore, at this time tomorrow I will send the worst hailstorm that has ever fallen on Egypt, from the day it was founded till now. ... the hail will fall on every person and animal that has not been brought in and is still out in the field, and they will die. (Exodus 9:18-19)

If you refuse to let them go, I will bring locusts into your country tomorrow. They will cover the face of the ground so that it cannot be seen. They will devour what little you have left after the hail, including every tree that is growing in your fields. (Exodus 10:4-5)

Then the Lord said to Moses, "Stretch out your hand toward the sky so that darkness spreads over Egypt—darkness that can be felt." So Moses stretched out his hand toward the sky, and total darkness covered all Egypt for three days. No one could see anyone else or move about for three days. Yet all the Israelites had light in the places where they lived. (Exodus 10:21-23)

The Institution of Passover

For the final plague, Moses was told to have his people splash the blood of a sacrificial lamb on their doorposts.

“On that same night I will pass through Egypt and strike down every firstborn of both people and animals, and I will bring judgment on all the gods of Egypt. I am the Lord. The blood will be a sign for you on the houses where you are, and when I see the blood, I will pass over you. No destructive plague will touch you when I strike Egypt. (Exodus 12:12-13)

This event was to be reenacted through a ritual every year in memory of their deliverance from Egypt. 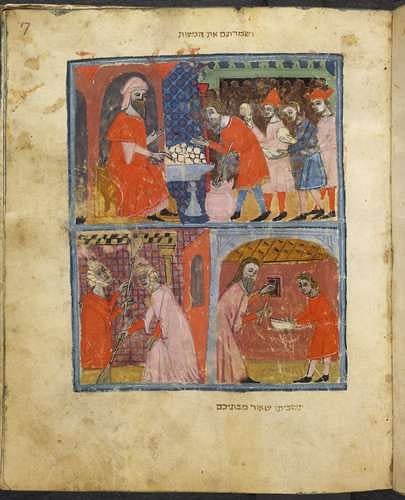 Pharaoh relented after the death of his firstborn son and let the Hebrews leave. He then changed his mind again and set out with his chariots to bring them back. When Moses and the tribes got to the border of the Red Sea, the waters were miraculously parted, allowing the Hebrews to walk over to the other shore. When Pharaoh arrived, his army drowned when the waters came rushing back.

There is an absence of archaeological evidence from Egypt itself in this period that would confirm the presence of the Hebrews in Egypt.

There is a consensus among biblical scholars that the Jewish Scriptures were first written down c. 600 BCE and stories were edited and updated over time. In narrative context, the story of the Exodus is placed c. 1300 BCE, where many elements match the period when Egypt conquered and controlled the Southern Levant, including Canaan. But the problem remains that there is an absence of archaeological evidence from Egypt itself in this period that would confirm the presence of the Hebrews in Egypt. The tradition places it during the reign of Ramesses II (r. 1279-1213 BCE) because it mentions "Pithom and Rameses as store cities for Pharaoh" (Exodus 1:11). There are many shared elements of Egyptian culture and religion in the Scriptures, but that could also come from cultural exchanges while living under Egyptian rule.

Scientific Theories of the Ten Plagues

Several scientists have been challenged by attempts to analyze the ten plagues in relation to natural phenomena, and, most lately, to place them within modern ecological studies of climate change. Many of the theories combine the plagues as related in a domino effect.

Blood in the Nile – The Ethiopian highland lakes (one of the sources of the Nile) could have been a source of red algae bloom that make the waters appear red. The phenomenon is called red tide and produces a toxin that kills fish.

Frogs – Assuming the red tide algae theory is correct, frogs would have been driven from the water onto the land.

Lice – Dead fish and frogs could produce swarms of insects. Aaron stirring up the dust could be explained by occasional sandstorms.

Flies – These could be identified as calliphoridae, or blowflies, that emerge from the maggot larvae of dead carcasses.

Livestock – Rinderpest, a known cattle disease originating in Asia, is known to have afflicted Egypt c. 3000 BCE and it other times.

Boils – Aristotle first described a disease of horses and donkeys transmitted through flies with the bacterium Burkholderia mallei in 330 BCE. Or it could be smallpox, as evidenced by smallpox scars on several mummies. Another guess is Yersinia pestis, the cause of the bubonic plague.

Locusts – Swarms of locusts were an age-old problem and continue to disrupt crops in modern Africa.

Darkness for three days – Suggestions include a major sandstorm, volcanic ash, or a solar eclipse. Astronomers have identified a solar eclipse on 5 March 1223 BCE.

Death of the firstborn – This plague has always been the most difficult to explain scientifically. A newer theory is to combine all the other plagues that would have produced contaminating mold in the grain stores that resulted in disease. The firstborn, the eldest, would have been offered grain from the top first and thus suffered a class-limited result of death. This theory, however, remains controversial.

The Parting of the Red Sea

Although not one of the ten plagues, the story of Moses' parting of the Red Sea has always received much attention. The rediscovery of ancient Egypt in the Victorian era attempted to relate it to the disruptions caused by the fall of Atlantis, as described in Plato's (428/427 to 348/347 BCE) Timaeus and his Critias.

Most of the speculation focuses on the eruption of a major volcano on the island of Santorini (Thera) c. 1620 BCE. This was the largest volcanic event in the ancient world, which may have led to the destruction of the Minoan civilization. Scholars cite the Tempest Stele which was carved by Pharaoh Ahmose I (c. 1550 BCE) that depicted climate aberrations, and especially darkness over the land.

Volcanic eruptions also produce tsunamis. A popular theory argues that the tsunami first created a recessional tide to expose land (enabling a crossing), and then rushed back by the time Pharaoh arrived. However, relating the plagues to the Santorini eruption requires a major recalculation of the timeline for when the Hebrews may have been in Egypt.

Rebecca Denova
Rebecca I. Denova, Ph.D. is Emeritus Professor of Early Christianity in the Department of Religious Studies, University of Pittsburgh. She has recently completed a textbook, "The Origins of Christianity and the New Testament" (Wiley-Blackwell)

The Bible takes its name from the Latin Biblia ('book' or 'books'...
Definition

The Ten Commandments introduce the legislation received by Moses...

Submitted by Rebecca Denova, published on 18 February 2022. The copyright holder has published this content under the following license: Creative Commons Attribution-NonCommercial-ShareAlike. This license lets others remix, tweak, and build upon this content non-commercially, as long as they credit the author and license their new creations under the identical terms. When republishing on the web a hyperlink back to the original content source URL must be included. Please note that content linked from this page may have different licensing terms.