Isthmia is a genitive noun with the meaning 'of the Isthmus.' It generally refers to the site that held the famous Isthmian Games near Corinth on the Isthmus. A natural assembly place for many Greeks and travellers. Isthmia in Antiquity was one of Greece's large Panhellenic sanctuaries and played host to the Isthmian Games (founded in 584 BCE) and hence held a special importance throughout the Greek and Roman periods, with its athletic and religious festivals coming second in significance only to Olympia.

The site is often associated with the events and matters of Corinth due to its close proximity and because it was administered by the city-state of Corinth and was a natural place for the sanctuary considering its place near the Isthmus and the many travellers that passed through on land and at ports. For instance, the Macedonians brought an army through the Isthmus in 225/4 BCE to face another Achaian force trying to take Corinth. Due to its location, armies would frequently march through it with often disastrous consequences to the site and its temple.

The sanctuary was primarily dedicated to the worship of Poseidon with a large Doric temple built in honour of the god.

Even after the Isthmia had been abandoned between the late 7th century and 11th century CE, the Isthmus continued to be an important medieval and early modern strategic location. The sanctuary was primarily dedicated to the worship of Poseidon with a large Doric temple to Poseidon being built around 700 BCE which was later replaced around 465 BCE with a newer larger temple complex. The temple of Poseidon was re-discovered in 1952 CE by Oscar Broneer.

Unfortunately, by the year 400 CE with the force of Christianity, the sanctuary and the games at Isthmia had been abandoned. In its current state, the site of Isthmia includes The Sanctuary of Poseidon, an Upper sanctuary, Roman Bath (Including a beautiful mosaic floor), Greek Pool and fortress and Hexamilion (A wall constructed in the reign of Theodosiius II across the Isthmus), as well as an eastern field which still warrants investigation. Excavations have been carried out by The Ohio State University and the University of Chicago. The Roman Bath at Isthmia was constructed around the mid-second century CE and it most often the focus of Isthmia in the current day.

Artefacts in the form of pottery, walls and cement floors indicate that the area was used at least as late as the Byzantine era despite being abandoned as a bath in the late fourth century CE. An extremely elaborate structure, the Bath contained vaulted ceiling, sculptures, marble walls, and most obviously a huge Italian style monochrome mosaic accompanied by colossal statue bases and evidence of sculpture in what would most likely have been the great hall of the complex. Among an array of rooms, pools and furnaces is also highly sophisticated drainage systems and heating systems, with the drainage systems still in sufficient working order in the present day. The Roman Bath was built over a Greek structure; with the mosaic covering what was before hand a Greek pool.

In the ancient Greek world, the word stadium or stadion referred... 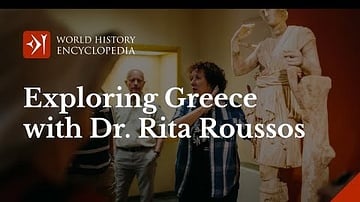 Thinking about travelling to visit all of the wonderful remains...
Image

Hydrocausts under the floor of the Roman Bathhouse at Isthmia
Image

Map of the main religious sanctuaries of classical Greece. The...
Image

Submitted by Jenni Irving, published on 28 April 2011. The copyright holder has published this content under the following license: Creative Commons Attribution-NonCommercial-ShareAlike. This license lets others remix, tweak, and build upon this content non-commercially, as long as they credit the author and license their new creations under the identical terms. When republishing on the web a hyperlink back to the original content source URL must be included. Please note that content linked from this page may have different licensing terms.