by Mark Cartwright
published on 27 January 2015

El Tajin is located near the coast of eastern Mexico and was an important Mesoamerican centre which flourished between 900 and 1100 CE. A part of the Veracruz culture, the city's architecture also displays both Maya and Oaxacan influences, while the most famous monument at El Tajin is the splendid Early Classic temple known as the Pyramid of the Niches. The site boasts several other important pyramids, monumental platforms, and 17 ballcourts, justifying its status as a UNESCO World Heritage Site.

El Tajin is a more modern name derived from the Totonac rain god or, more precisely, the twelve old men or Tajin who were considered lords of thunderstorms and who were thought to live in the ruins of the city. The surrounding fertile land was (and still is) ideal for the cultivation of maize, cacao, vanilla, and tobacco, an ideal basis to support a prosperous trade centre. There is evidence that El Tajin was first settled in the 1st century CE, and the city underwent twelve distinct building phases up to the 12th century CE. The early centuries at the site show evidence of influence from Teotihuacan both in pottery and architecture, notably with the first stepped pyramids. The first ballcourts at the site appear around 500 CE. The oldest surviving large pyramid dates to El Tajin V during the 6th century CE. Tajin VI from 600 CE saw the construction of the north ballcourt. From the early 7th century CE, El Tajin began to conquer the smaller surrounding settlements to establish itself as the dominant force in the area. In the 8th century CE, the Pyramid of the Niches was completed and the huge raised acropolis platform of Tajin Chico was constructed. El Tajin was destroyed by fire and abandoned around 1100 CE or even earlier.

Many of the buildings are typical of the Classic Veracruz style and so were richly decorated with relief carvings which would also have been brightly painted.

The core of Epiclassic El Tajin covered some 60 hectares (146 acres) and may be divided into two distinct areas with the oldest being in the south and the newer, known as Tajin Chico, in the northern part of the city. The former is built according to the cardinal compass points, consists of rectangular platforms, and is dominated by the Pyramid of the Niches. Tajin Chico is more elevated than the earlier portion of the city, and its buildings are aligned along a north-west to south-east axis so that the whole is set at a 60 degree angle to the structures of older El Tajin. The reason for this change in orientation is unknown but may simply be a question of geographical limitations. Many of the buildings are typical of the Classic Veracruz style and so were richly decorated with relief carvings which would also have been brightly painted. In addition, El Tajin displays advanced construction techniques as many structures have concrete slab roofs, the liquid concrete having been poured over wooden frames.

Pyramid of the Niches

The Pyramid of the Niches was constructed in the 8th century CE and has 365 symmetrically arranged square niches (each 60 cms deep) and these, along with the heavy scroll carvings typical of Veracruz architecture, create a constantly shifting play of light and shadow when the monument basks in sunshine. Undoubtedly then, the structure had some connection with the solar year. The pyramid has six platforms, is 20 metres high, whilst each side is 26 metres wide. A richly decorated stairway leads to a small structure on the top platform. The balustrades of the stairway are decorated with scroll or meander designs, and the whole displays a similar architectural design to Maya Copan. It is also noteworthy that a stela depicting a standing ruler figure in relief was discovered at the base of the pyramid and is another strong artistic link to the Maya. Inside the pyramid is a smaller one, contemporary with the outer facing which was originally painted bright red.

Constructed between the 9th and 10th centuries CE, Tajin Chico was probably used as a residential area for the city's aristocracy. The higher placed the buildings, the newer they are, so that the large three-level platform building on the north-west hill is the most recent, as proven by the presence of older pottery shards in its masonry. Built in the 10th century CE, it originally had a six-column colonnade on its eastern façade and is approached by a short stairway with retaining walls. The columns carry relief carvings which narrate scenes from the life of probably El Tajin's last ruler, 13 Rabbit. Once again, architectural decoration on several Tajin Chico structures often remind of a Maya influence, this time from Uxmal.

There are no fewer than 17 ballcourts at El Tajin, an unusually high number, which has led the historian M. E. Miller to speculate that the city may well have held great sporting festivals much like those at Olympia in Ancient Greece. Indeed, El Tajin seems to have been a repository for rubber which was used to make the solid black balls used in the Mesoamerican ballgame. Most courts were deliberately positioned so that background topographical rises were framed by the sloping sides as one looked down the length of the court.

The south ballcourt is of particular interest because of its relief sculpture depicting rituals, including human sacrifice. Dating to between 700 and 900 CE, four of the six relief panels (each composed of several slabs) have a large skeleton figure rising from a pot on their left sides. One panel shows two ball players cutting out the heart of a third player above whom is another skeletal figure hungry for the victim's soul. Another panel shows a warrior ritual with a central figure dressed as an eagle standing over a person reclining on a couch and flanked by two musicians. All the panels have a decorative double frame, a typical feature of Veracruz art.

The Ball Game of Mesoamerica

The sport known simply as the Ball Game was played by all the major...
Article

Turquoise was a highly-prized material in ancient Mesoamerica...
Definition

Chocolate was one of the most desired foods of Mesoamerica and...
Article

Jade was a highly-esteemed material in many Mesoamerican cultures... 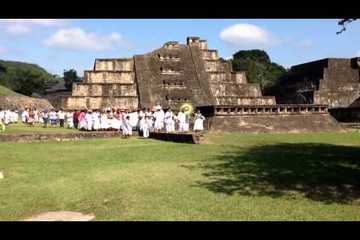 El Tajín is a pre-Columbian archeological site and one of the largest...
Article

Obsidian is a dark volcanic glass which provides the sharpest cutting...

Submitted by Mark Cartwright, published on 27 January 2015. The copyright holder has published this content under the following license: Creative Commons Attribution-NonCommercial-ShareAlike. This license lets others remix, tweak, and build upon this content non-commercially, as long as they credit the author and license their new creations under the identical terms. When republishing on the web a hyperlink back to the original content source URL must be included. Please note that content linked from this page may have different licensing terms.