Blessed Hildegard of Bingen (German: Hildegard von Bingen) (1098 — 17 September 1179), also known as Saint Hildegard, and Sibyl of the Rhine, was a Christian mystic, German Benedictine abbess, visionary, and polymath. Elected a magistra by her fellow nuns in 1136, she founded the monasteries of Rupertsberg in 1150 and Eibingen in 1165. One of her works as a composer, the Ordo Virtutum, is an early example of liturgical drama.

Attention in recent decades to women of the medieval church has led to a great deal of popular interest in Hildegard, particularly her music. Between 70 and 80 compositions have survived, which is one of the largest repertoires among medieval composers. Hildegard left behind over 100 letters, 72 songs, seventy poems, and 9 books.

One of her better known works, Ordo Virtutum (Play of the Virtues), is a morality play. It is unsure when some of Hildegard's compositions were composed, though the Ordo Virtutum is thought to have been composed as early as 1151. The morality play consists of monophonic melodies for the Anima (human soul) and 16 Virtues.

In addition to the Ordo Virtutum Hildegard composed many liturgical songs that were collected into a cycle called the Symphonia armoniae celestium revelationum. The songs from Symphonia are set to Hildegard's own text and range from antiphons, hymns, sequences, to responsories. Her music is described as monophonic; that is, consisting of exactly one melodic line. Hildegard's compositional style is characterized by soaring melodies, often well outside of the normal range of chant at the time. Additionally, scholars such as Margot Fassler and Marianna Richert Pfau describe Hildegard's music as highly melismatic, often with recurrent melodic units, and also note her close attention to the relationship between music and text, which was a rare occurrence in monastic chant of the twelfth century. Hildegard of Bingen's songs are left open for rhythmic interpreation because of the use of neumes without a staff. The reverence for the Virgin Mary reflected in music shows how deeply influenced and inspired Hildegard of Bingen and her community were by the Virgin Mary and the saints.

The definition of 'greenness' is an earthly expression of the heavenly in an integrity that overcomes dualisms. This 'greenness' or power of life appears frequently in Hildegard's works. 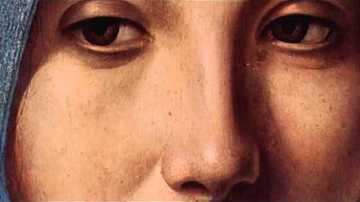 Ten Women of the Protestant Reformation

Women played a vital role in the Protestant Reformation (1517-1648...
Article

Argula von Grumbach's To the University of Ingolstadt

Original video by micrologus2. Embedded by Joshua J. Mark, published on 27 May 2019. Please check the original source(s) for copyright information. Please note that content linked from this page may have different licensing terms.