How the Bible Became Holy

Running a website with millions of readers every month is expensive. Not only do we pay for our servers, but also for related services such as our content delivery network, Google Workspace, email, and much more. We would much rather spend this money on producing more free history content for the world. Thank you for your help!
$527 / $21000
❤ Donate

by William Brown
published on 17 October 2015 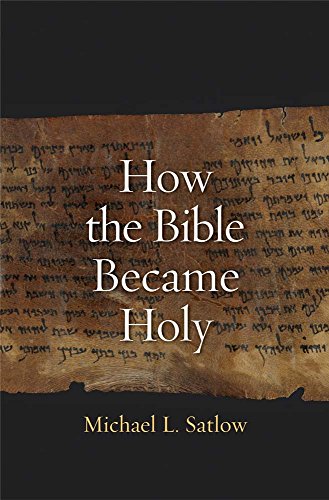 In How the Bible Became Holy, Michael Satlow narratively presents the history, developments, and trajectories of how the Bible became an authoritative text. Unlike many books which explore the development of the Canon, or Canons for Jews and Christians, Satlow focuses on the degrees to which historical Judaism and Christianity bestowed authority to what nowadays is called the New Testament and Hebrew Bible (Old Testament).

He emphasizes three major elements in his narrative history. First, the texts which became later tradition, texts which were bestowed authority, were done so by economically secure peoples. Second, the texts are filled with and are the result of political and social conflict. Third, he focuses on the dynamics between the official and un-official religiosity throughout history. Through illustrating these three major factors in the development of the Bible as an authoritative text, he offers thought-provoking analysis of theologized history and, for readers with Judeo-Christian sentiments, challenges the basic and standard understanding of the Bible's history.

Part I focuses on the emergence of Israel as distinct tribal units until the exilic period. Part II covers the rule of Alexander and dawn of Hellenism to the emergence of the major socio-theological Jewish parties into the 1st century CE. Finally, Part III, having established various authoritative trajectories in Parts I and II, explores the developments of early Christianity and Judaism, namely the early Christian letters and emergence of Rabbinic Judaism.

Satlow's work is fantastic because his presentation does not simplify the complexities of how the Bible became holy, nor does he examine every crack and crevice. With great clarity, he presents the complexities whilst avoiding dense, scholarly language. In effect, his approach to writing opens up his work to a wider variety of audiences who seek to understand the Bible more. Additionally, his work recognizes that many of the suggestions and historical constructs are conjectural. By recognizing this within the work itself, he protects himself from critics who may read How the Bible Became Holy as a polemic against the “inerrant, Christian holy book”. Satlow seeks an honest, open presentation of the history of how the Bible attained authoritative status and he achieves this monumentally challenging goal in his book.

Over all, How the Bible Became Holy is an essential read for everybody. Yes. Everybody. It is understandable enough that the average adult can comprehend the information. It is scholarly enough that the average student can engage with it and understand the history. Although it may not be resourceful for furthering study in academia, Satlow writes with such a clarity and conversational tone that it is an important book for those beginning any study regarding the Bible, especially for historical studies.

$24.30
plus shipping
By purchasing books through this website, you support our non-profit organization. World History Encyclopedia receives a small commission for each book sold through our affiliate partners.

According to biblical tradition (and some say myth), King Solomon...
Definition

$24.30
plus shipping
By purchasing books through this website, you support our non-profit organization. World History Encyclopedia receives a small commission for each book sold through our affiliate partners.