The Conflict Myth and the Biblical Tradition

by William Brown
published on 01 September 2015 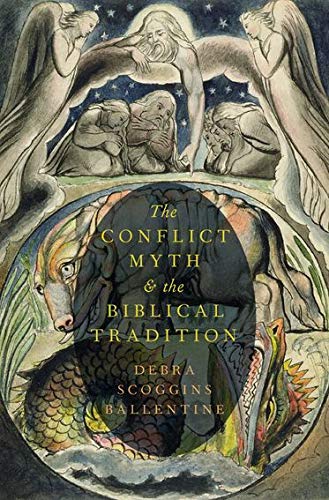 The Conflict Myth & the Biblical Tradition traces conflict myth as an ideological tool for legitimization, or de-legitimization, of political entities throughout ancient West Asia. An assistant professor at Rutgers University in the Department of Religion, author Debra Scoggins Ballentine specializes in the Hebrew Bible and ancient Near Eastern religions.

Chapter one of The Conflict Myth introduces Ballentine's approach to myth theory and her purpose, namely “to identify how mythological themes are used in various sorts of contexts, regardless of how scholars classify those contexts” (12). Specifically she focuses on the mythological conflict topos and “its place with respect to ideology” (13). Chapter Two introduces and analyzes the conflict topos within four extant narratives, Anzu, Enuma Elilsh, Aššur Version of Enuma Elish, and the Balu Cycle. Each summary and analysis of extant narrative draws out and focuses upon the ideological implications, especially royal ideology. Ballentine demonstrates that each narrative, though with differing divine taxonomies, utilizes the conflict topos to legitimate kings and royalty, while also de-legitimizing other deities. In effect the myth narratives “promote particular cosmic and earthy locations and royal individuals” (71). Having established the ideological nature of the conflict topos, chapter three analyzes “shorter forms of the motif in epitomes, allusions, and imagery” (72) from sources between the 18th and 6th centuries BCE. Ballentine is careful to display the unique status of various utilizations of the conflict myth through every example. Chapter four continues by noting the various adaptations of the conflict myth through innovative legitimization within eschatological frameworks, drawing on literature of the Hebrew Bible, New Testament, 1st and 2nd century Pseudepigrapha, and Rabbinic literature. Chapter five explores the secondary application of conflict myth to Gamaliel, Jesus, and Antiochus IV in regard to the notion of control over the sea. The final chapter (chapter 5) importantly argues that “Chaos” “is not an accurate characterization of the various enemies featured across the articulations of the ancient West Asian conflict topos” (186) and re-states her primary points, especially drawing out the uniqueness of each application of the conflict myth for each particular ideological intention and political environment.

Overall, Ballentine's goal is clearly accomplished. Without a doubt she demonstrates how the conflict myth is a common theme throughout ancient West Asian culture and how cultures have, throughout centuries, utilized the myth conflict to legitimize certain ideologies. Furthermore, she elucidates how the biblical tradition is not merely a “copy” of ancient West Asian conflict myth; rather, it is utilization of a common theme by which political power could be legitimitized, either by conflict myth of the past or eschatological innovations of conflict myth in the future. Such an accomplishment is one of the strongest elements of her work, especially because it offers a different understanding to the appropriation of characters like “Tiamat, Yammu, Môtu, and Lōtanu/Leviathan as “agents of chaos” or “chaos embodied”” (196). Additionally, her approach offers answers to questions about texts, such as her suggestion that “Rabbinic combat traditions may be responding to the types of claims made about secondary divine figures… propagated in late antique Christos-centered ideologies” (170), ideologies cleaved to by early Christianity for their theological benefit to Christian theologies. Such explanation for certain factors within biblical literature is present throughout her work. Finally, she is able to demonstrate the unique status of the biblical application of the conflict motif without wrongly pushing for its total autonomy from ancient West Asian themes or its total dependence upon ancient West Asian themes.

Aside from how she used the Balu Cycle and her lack of nuances about types of conflict myth, especially as they relate to ideological legitimization, her work is excellent in its presentation of the conflict myth and biblical innovations of it. Wide coverage of literature, from Ugaritic works to Rabbinic works, and thorough analysis of each occur of the conflict motif mark her work as on to be remembered for future discussion. The Conflict Myth & the Biblical Tradition provides a unique approach to conflict myth, and especially the Hebrew Bible, that may be utilized by scholars to develop a deeper and fuller understanding of biblical myth and the conflict myth.

$151.30
free shipping worldwide
$75.64
plus shipping
By purchasing books through this website, you support our non-profit organization. World History Encyclopedia receives a small commission for each book sold through our affiliate partners.

Ancient Asia Minor is a geographic region located in the south-western...
Definition

The Bible takes its name from the Latin Biblia ('book' or 'books'...
Article

Galatia was the most long-lasting and powerful Celtic settlement...

$151.30
free shipping worldwide
$75.64
plus shipping
By purchasing books through this website, you support our non-profit organization. World History Encyclopedia receives a small commission for each book sold through our affiliate partners.
Remove Ads