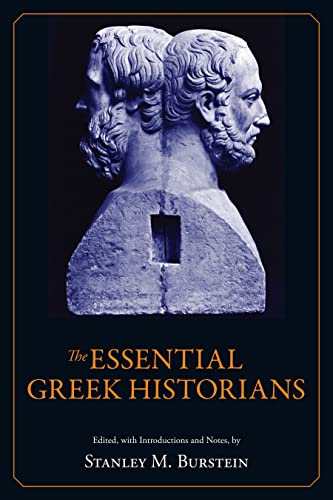 "The Essential Greek Historians" is a great starter to explore the world of ancient Greece through the words of the historians who were there. It is a "Who's Who" of the Western world's first historians from Herodotus to Aristotle and from Xenophon to Plutarch. It is not always a casual read. At times it feels like what it ultimately is: a textbook sampler of works from the time. The book is vocative and edifying but not the one a person would pack for a beach holiday to Mykonos.

In his introduction to The Essential Greek Historians, an important distinction is made by the editor Stanley M. Burstein: what follows in this book is not "history" but "historiography." History is made up of events and consequences, an assemblage of facts and dates recorded for posterity, while historiography is what we do with those details when we gather them up and write them down. In other words, historiography is the kind of story we expect when we open a book today. But The Essential Greek Historians’s chief goal is not to retell ancient yarns for a modern readership looking for a leisure read at the beach. It is a scholarly work ultimately suitable for the classroom and those looking to study the words written by Western civilization’s early chroniclers.

It is a scholarly work ultimately suitable for the classroom and those looking to study the words written by Western civilization’s early chroniclers.

That makes this 200-page compendium alternately exciting, transporting, arcane, and dull, depending on both the author's and the reader's interest. If the reader's wish is to know their Xenophon from their Polybius or their Aristotle from their Memnon, and how they approached the events around them, then this book is a perfect place to begin.

Selected works from eight historians are included in chronological order, starting with Herodotus (l. c. 484 – 425/413 BCE) and wrapping up with Plutarch, who died around 119 CE. Although the book's title suggests a strictly Greek collection, several authors from the earliest centuries of the Roman era are also featured. The collection begins with one of the most famous Greek historians and the one who might closest resemble a history book we would pluck off the store shelf. Herodotus often has more on his mind than a dry overview - many of his stories would be home in an episode of Game of Thrones.

Moving on to Chapter Two of The Essential Greek Historians, it is difficult to see how Thucydides is considered the direct successor to Herodotus. Unlike his mentor, he chooses to remain at arm’s length from his subjects. That makes him more objective than the so-called “Father of Lies” but far less thrilling to read. Yet, he, too, has evocative stories to tell. His overview of the Peloponnesian War feels authentic and raw, especially his description of a plague that ravaged Athens in 430 BCE.

Other renowned scribes follow: Xenophon focuses on the events of his lifetime, mainly the struggle for superiority between Athens, Sparta, and Thebes in the 5th century BCE. Plutarch is best known for Parallel Lives, a series of 48 pairs of biographies each including one Greek and one Roman of similar destiny (only 23 pairs have survived to our day). The selection of Alexander the Great focuses on character rather than deeds in an attempt to illuminate the ethical upbringing of the man who would conquer most of the known world. Thus, Alexander’s upbringing is explored in greater detail than his triumphs on the battlefield.

Taken as a whole, the book is likely meant to be studied or sampled more than devoured on a sunny holiday in Greece. To my eyes, at least, several passages became monotonous and dry, driven by stark facts and details and missing an emotional hook to keep me glued to the words. This title's editor, Stanley Burstein, is Professor Emeritus of History at California State University, Los Angeles. Beyond the text, there are no illustrations, images, maps, or additional elements. It does have a Suggested Reading section at the end that provides resources for readers to dig deeper into the historians mentioned. The mere fact, however, that these ancient works have survived to the 21st century tells us our desire to preserve the past is timeless. They are something we value as much now as when Herodotus picked up his stylus so that “the events of human history may not fade with time and the notable achievements may not lack their due fame.”

$9.99
plus shipping
By purchasing books through this website, you support our non-profit organization. World History Encyclopedia receives a small commission for each book sold through our affiliate partners.

Neil Laird
Neil Laird is an Emmy-nominated producer-director of historical films. His work, which focuses largely on the ancient world, has appeared on the Discovery Channel, National Geographic, BBC, The Science Channel, Channel 4, PBS and many other networks.

$9.99
plus shipping
By purchasing books through this website, you support our non-profit organization. World History Encyclopedia receives a small commission for each book sold through our affiliate partners.