by Graham Squires
published on 18 October 2022 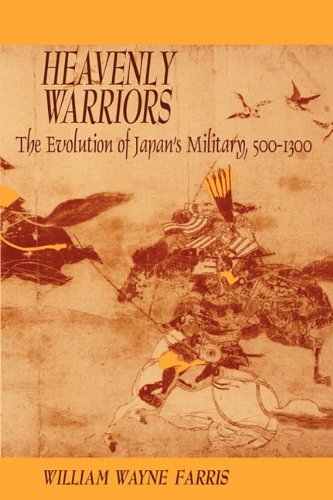 An excellent study of the history of the warrior class in ancient Japan, William Wayne Farris's "Heavenly Warriors: The Evolution of Japan’s Military, 500–1300" is aimed at an academic audience but may also be of interest to those with a general interest in the topic.

This is a fairly old book since it was first published in 1996, but it remains the best English-language introduction to the history of the warrior class in ancient Japan. In English, Japanese warriors are usually referred to as ‘samurai’. Although this is a Japanese word, it is a term that is not used all that often in Japanese. ‘Samurai’ means ‘one who serves’ and originally had a much broader meaning than ‘warrior’. In Japanese, depending on the type and period, many different words are used for ‘warrior’. The most common replacement is ‘bushi’, which literally means ‘fighting man’.

Farris believes that, in studying the history of bushi, historians have been too keen to try and make the Japanese past fit into models derived from that of Europe.

Heavenly Warriors: The Evolution of Japan’s Military, 500–1300, by William Wayne Farris, covers the history of bushi from 500 to 1300 CE. The book contains eight chapters. The first chapter deals with the period from 500 to 645 and examines the indigenous origins of Japan’s warrior class. The second covers 645 to 770 and explains how, as a part of a wave of cultural borrowing from mainland Asia, the Japanese state adopted a Chinese system of military organization. Chapter Three details how these Chinese-style armies performed in wars in northeastern Japan against the Emishi between 770 to 900. Chapter Four focuses on the period 850 to 950 when government armies were used to suppress domestic rebellions. Chapter Five looks at the evolution of military institutions in both the capital and provinces in the middle Heian period from 950 to 1050. Chapter Six describes developments in the later Heian period from 1050 to 1150, including the Former Nine Years' War and the Latter Three Years' War. Chapter Seven deals with the rise of the Taira family and their eventual destruction by the Minamoto clan between 1150 and 1185. In the final chapter, Farris describes warrior armies in the early Kamakura period from 1185 to 1300.

This book, while dealing with a complex topic, combines a lot of interesting details with a strong overall argument. Farris believes that, in studying the history of bushi, historians have been too keen to try and make Japanese history fit into models derived from that of Europe. In European history, the appearance of feudalism involved a major discontinuity, as it developed to fill the political vacuum caused by the collapse of the Roman Empire. In a similar way, historians have argued, Japanese feudalism appeared suddenly after the collapse of the institutions associated with the ritsuryō state that had been modeled on those in China. Farris calls this the ‘Western-analogue theory’. In opposition to this, he makes a convincing case for a more evolutionary approach. In Japan, Farris argues, the ritsuryō state did not collapse the same way as the Roman Empire had in Europe. Rather, it just evolved into something else.

This approach allows for a much more nuanced understanding of the topic that emphasizes some of the fundamental continuities in Japanese history. For many centuries the imperial court existed side by side with warrior governments, and this book provides a good explanation of how that situation came to be. Farris, who up until his retirement was a history professor at the University of Hawai’i, does a good job of locating the history of the warrior class in a broad social and economic context. The book is slightly dry but this is mostly because the nature of the primary sources used by Farris is not such to allow for a more colorful account. The book contains some simple yet useful maps and a few photos, but these do not really add much to the text. It would be good to read this book with the various studies by the historian Karl F. Friday who examines similar topics but from a rather different perspective.

$36.11
free shipping worldwide
$27.95
plus shipping
By purchasing books through this website, you support our non-profit organization. World History Encyclopedia receives a small commission for each book sold through our affiliate partners.

The medieval period of Japan is considered by most historians to...

$36.11
free shipping worldwide
$27.95
plus shipping
By purchasing books through this website, you support our non-profit organization. World History Encyclopedia receives a small commission for each book sold through our affiliate partners.