Running a website with millions of readers every month is expensive. Not only do we pay for our servers, but also for related services such as our content delivery network, Google Workspace, email, and much more. We would much rather spend this money on producing more free history content for the world. Thank you for your help!
$199 / $21000
❤ Donate

by Athanasios Fountoukis
published on 21 July 2022 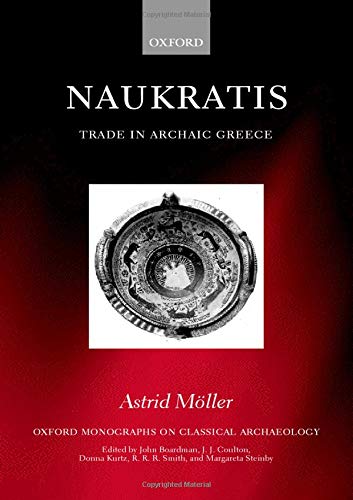 Naukratis: Trade in Archaic Greece by Astrid Möller is an academic work that investigates Greek trade in the Archaic period by concentrating on the trade center of Naukratis in Egypt. Her argument displays the archaeological finds that could shape our understanding of the role of the ancient city.

Naukratis: Trade in Archaic Greece is an edited and translated adaptation of Astrid Möller's doctoral thesis from 1990. She provides the first complete account of the archaeology and ancient history of Naukratis. The author has a wonderfully straightforward way of writing and her 16-page long bibliography shows that she had employed a remarkable quantity of material. The sheer number of archaeological findings she mentions is equally amazing. The appendices that are found in the book will be very valuable for pottery enthusiasts and experts. These represent an introduction to a full catalog of Naukratis' unearthed pottery, which is now spread among multiple museum collections. In this regard, her depiction of a very clear chronological outline of the many Greek pottery types represented at Naukratis must also be mentioned. Möller reaches her conclusions through the thorough study of ancient shrines, pottery types, and examination of the period's literary evidence.

The historian argues that Naukratis resembled a port of trade, in which the administrative institutions provided a space that offered security for the traders' business. In exchange, the traders would have paid taxes. In addition, she perceived the port as a secure space from rival foreign intervention, in which regional trade was promoted. As a result, the local administrative institutions controlled the regulation of the prices, as well as the quantities that flowed into the port. The scholar argues that the pharaohs of the Saite period controlled Naukratis and turned it into a trade center to acquire resources they were unable to obtain through military campaigns. Also, the port would have enabled the interaction of the regional elites, as through the exchange of gifts they would have strengthened their socio-economical position.

Möller claims that the substantial evidence of Greek temples could promote the idea of Naukratis representing a completely Greek emporion.

Möller points out the Greek interest in grain trade with Egypt and argues that the Greek sanctuaries that were found in the region expressed the need for grain for the polis. After analyzing the archaeological material excavated from the area, the author agrees that Naukratis had to be identified as Greek. She claims that in comparison with the scant presence of public structures, the substantial evidence of Greek temples could promote the idea of Naukratis representing a completely Greek emporion.

Finally, the last chapter of her insightful investigation combines the already made claims based on archaeological evidence with the historical narrative that attests to the events of the Archaic period. Möller states that Psamtik I paved the way for the firm establishment of the prominent port of trade. However, her allegation is in contrast with Herodotus' account that describes Naukratis' foundation as a product of the pharaoh Amasis' philhellenic sentiment. The author concludes that Egypt used Naukratis as a highly regulated space, where external trade with Greek merchants flourished. Additionally, Naukratis provided special benefits for the northern traders, as it supplied them with the necessary grain that the Greeks could not have access to.

Ultimately, Naukratis was a thriving commercial center on the west side of the Nile's Delta. It was known for its sanctuaries that provided Greeks with access to Egyptian grain as well as various luxurious commodities. Naukratis: Trade in Archaic Greece reveals the interesting and meticulous research that had been made by Astrid Möller, an expert in ancient history. Certainly, this work contributes greatly to the interpretation of the interactions between Greeks and Egyptians during the 7th and 6th centuries BCE.

$325.00
plus shipping
By purchasing books through this website, you support our non-profit organization. World History Encyclopedia receives a small commission for each book sold through our affiliate partners.

Athanasios Fountoukis
A historian, who acquired a BA degree in History and Ethnology in Greece, and an MA degree in Ancient History in the Netherlands. He is fascinated by the ancient history of maritime and nomadic cultures.

Naukratis (also spelled Naucratis, and known as Nokraji to the...
Definition

$325.00
plus shipping
By purchasing books through this website, you support our non-profit organization. World History Encyclopedia receives a small commission for each book sold through our affiliate partners.