The Celtic Myths that Shape the Way We Think

by Kelly Macquire
published on 02 November 2021 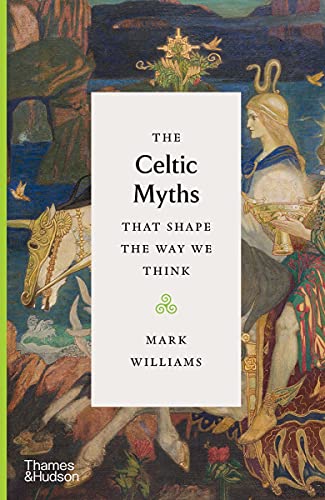 The Celtic Myths That Shape the Way We Think by Mark Williams is a new look at the history and development of the tales of Celtic mythology. Not only that but he also highlights the issues surrounding them and the ways in which they have been retold and reimagined for millennia. I would recommend this book to those who are looking to really sink their teeth into the intricate and layered history of Celtic mythology, its development, history, and prevalence in modern-day pop culture.

By the time the Celtic myths were written down in the Middle Ages, not only were they already hundreds of years old but were also written after the influence of the medieval church. Williams works from the roots of these tales, he interrogates the sources from which we have drawn these legends and stories and unpacks the multiple meanings of, and the cultural impacts made by, these legends.

Irish saga is remarkable for the richness and agency of its female characters. (171)

It is clear that this book has been researched, developed, and written by someone with an incredible depth of knowledge and understanding of both the languages he is working with and the entire corpus of the source material. One of the highlights of this book is when Williams includes his own translations to the tales in focus, which will definitely help the lay reader (me). It is these times that it becomes clear that you are reading a book written by a person who could not be more qualified to do so, not to mention that the translated snippets were so helpful for someone like me who is not familiar with the tales focussed on in the book. Williams takes you on a journey through Celtic mythology, with first introducing what Celtic mythology is (which is especially important given that the writings of Celtic mythology all come from the medieval period, and the term 'Celtic' is very broad), and then dives into well-known figures like King Arthur and Merlin, and lesser-known figures like Branwen, Cú Chulainn, and Blodeuwedd. As Williams puts it in his introduction to 'The Nature of Celtic Mythology':

…for us, as for many heroes in Welsh and Irish tales, there is a fall of mist, and we find we have to enter an unfamiliar world with different rules. (7)

You can definitely enjoy it without any pre-existing knowledge, but you will get more out of it if you are already familiar with the characters & stories.

I am torn with this book because on the one hand I really enjoyed reading it, but on the other, I wish I had known more about the general history of Britain, Ireland, Scotland, and Wales, and their development of mythology and literature before jumping into this book. You can definitely enjoy it and get a lot out of it without any pre-existing knowledge on Celtic literature and mythology, but Williams truly deep-dives into the cultural history and impact of these legends as well as the development of the tales and so you will definitely get more out of it if you are already at least familiar with the characters and stories he explores. Even just having some sort of familiarity with the Celtic/Irish/Welsh languages, you will have an easier time reading it for the pure fact that you will not get all the names and characters mixed up as I did. There is a pronunciation guide at the back though, which was so incredibly helpful – a good touch and very appreciated! Every now and then Williams makes really fascinating comparisons to other ancient literature, like the parallels between the Aeneid and Rome's founding story and Britain's founding story in Chapter Four titled 'Brutus,' as well as the comparison between the tale of Deirdriu in Chapter Nine ('The Celtic Love Triangle') and the structure and features of Greek tragedy.

Once again we are reminded that what we call 'Celtic mythology' is not a pure substance handed down from the pagan past, but a rich amalgam that developed over centuries. (213)

This quote really encapsulates the essence of Williams' book - he both introduces stories and characters that may or may not have been developed in the 'pagan past' and aims to reconcile what we do know about them, how we know them, and how we came to think about these particular tales and characters in the modern-day. Truly, this is a monumental task, and the sheer amount of information in this book is unfathomable.

The book itself is beautiful, with green foiling on the naked hardback and a beautifully designed dusk cover and end pages. It is also illustrated with images, both colour and black-and-white, which is always a plus for me! There were a few grammatical errors in this book, and it was not just the odd misspelled word, which happens in most books, but at one point a character had her name spelt three different ways on one page. A couple of times it felt like words were missing, and there were sentences that seemed to be cut off and unfinished. These were scattered throughout the book and although overall it did not affect my ability to understand what was going on, it just feels like it might have needed one more edit to pick up on these errors prior to publication.

We must remember that these stories are not myths, though there is definite myth in them: they are medieval tales, written in medieval Irish for a medieval audience. (252)

This review was originally posted on Kell-Read. Kelly was provided a copy of The Celtic Myths That Shape the Way We Think by Thames and Hudson.

$28.51
free shipping worldwide
$28.75
plus shipping
By purchasing books through this website, you support our non-profit organization. World History Encyclopedia receives a small commission for each book sold through our affiliate partners.

Merlin (also known as Myrddin, Merlinus) is the great wizard of...
Definition

Cú Chulainn (pron. Koo-kul-in), also Cúchulainn, is one of the...
Definition

King Arthur is among the most famous literary characters of all...

$28.51
free shipping worldwide
$28.75
plus shipping
By purchasing books through this website, you support our non-profit organization. World History Encyclopedia receives a small commission for each book sold through our affiliate partners.
Remove Ads