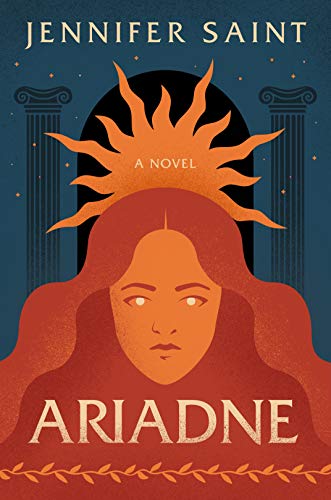 Ariadne by Jennifer Saint is a retelling of the life of Ariadne, Phaedra, the Minotaur, and Theseus from the point of view of Ariadne and Phaedra. Starting with from their childhood and following the myth of the Minotaur in the Labyrinth, through to Theseus' desertion of Ariadne on Naxos and his marriage to Phaedra, this book is a beautifully written retelling of this story. Focussing on the punishment of women for men's follies, the novel gives a feminist edge to a well-known story.

Ariadne by Jennifer Saint follows the myth of the Minotaur in the Labyrinth, and Theseus' subsequent desertion of Ariadne on Naxos, from the point of view of Ariadne and her younger sister Phaedra. The first thing that struck me when reading this book was the writing, it is absolutely beautiful. Saint’s writing style is lyrical and poetic, and it has given me the same feeling as Madeline Miller’s Circe. The amount of tabs I used for this book is just insane, and it was primarily so I could go back to the sentences that were so beautiful and striking. I thought the descriptive language lent itself well to the story, as it is quite a slow burn. If you are looking for action, then this is not the book for you. I would have liked a little bit more dialogue to help the story move a bit, but when we did get dialogue, Saint made it count. It strikes me as very similar to Greek tragedy in the sense that any action or violence is never shown, but rather told. You do not actually read about Theseus killing the Minotaur, but when he exits the labyrinth with the other tributes, you know that a bloody fight has just occurred.

I know that human life shines more brightly because it is but a shimmering candle against an eternity of darkness and it can be extinguished with the faintest breeze. (229)

The book is split into four parts; the first and fourth part are from Ariadne’s point of view, and in parts two and three, we get both Ariadne and Phaedra’s point of view. Having dual perspectives in this novel was such a brilliant way to tell this story, especially since Phaedra essentially lived the life Ariadne dreamed for herself the second she locked eyes with Theseus. This book was full of hints to the long history of Greek epic poetry, such as the reuse of epithets commonly seen in Homer’s Iliad and Odyssey. My favourite and one that popped up a lot was "rosy-fingered dawn," which could be found rewritten numerous time in ways such as "the rosy fingers of dawn" (15). You also have the bee pendant given to Ariadne from Daedalus, which can only be inspired by the Minoan gold bee pendant found in the site of Malia on Crete, as well as mentions of the labrys, also known as a double axe which is a very common symbol and artefact found in Minoan sites and contexts. Any time an author intertwines archaeological aspects into a retelling or reimagining of a myth, I automatically like it more.

One very prevalent theme throughout this retelling is the inherent unfairness there was in being a woman in the world of the gods & in Ancient Greece.

One very prevalent theme throughout this retelling is the inherent unfairness there was in being a woman in the world of the gods and in Ancient Greece in general. Furthermore, this idea of women being punished for the actions of men is commented on by Ariadne as early as page 15 with her thought "however blameless a life we led, the passions and the greed of men could bring us to ruin, and there was nothing we could do.’ The myths of women such as Scylla who betrayed her father to help Minos and who was then killed by Minos for her treachery, of Io who was turned into a cow to ‘save’ her from Hera’s wrath after she slept with Zeus, of Semele who was tricked by Hera into forcing Zeus to show her his divine self which then promptly killed her, of Medusa who was turned into a monster with snakes for hair and a look which could kill after being raped by Poseidon, were all brought up time and again in this book, as an emphasis of how women were punished for the follies of men, and I wish Ariadne learnt from these stories. Of course, the myth had to play out, but having those myths mentioned throughout the story makes it all the more clear how helpless the lives of women were.

I wondered what it felt like; to command the respect of people who had not seen you for years and knew nothing of you except that you were the son, rather than the daughter, of the King. (Phaedra, 152)

This book was very character-driven, and I was loving every minute of it. We pretty much get the entire life of Ariadne and Phaedra from their childhood until the day they die in 386 pages, so naturally, their development and growth was a huge part of the narrative. Ariadne was always quite self-aware, she knew the consequence of her actions, but she was so naive to assume that everyone else (ahem, Theseus), was as trustworthy as she was. Her character fluctuated between being a relatively naive woman who let things happen to her, to being this strong, courageous woman who did what she wanted for herself. The inconstancies of her character made her all the more human to me, and a loved reading through her life and the ways in which Saint interpreted her life on Naxos with her children and the Maenads.

Having the dual perspective of Ariadne and Phaedra was such a great way to show the contrasting lives of the sisters, and how they grew up so differently. The most striking contrast for me was the way in which the two women dealt with becoming mothers and their feelings towards their children. It was haunting, and their different experiences have really stuck with me. This is similar to their relationships with their husbands, Dionysus and Theseus. Dionysus is the god of wine, and the fact that he is a god and has married a mortal is your first sign that this cannot stay so perfect. His development was one of my favourite parts of this book, it was so intriguing to read how the following of mortals in his rites affected him, and consequently his relationship with Ariadne and their children.

In contrast, Phaedra and Theseus were never in love, and Phaedra lived a lonely existence as the Queen of Athens. Being in her head as she meets this innocent, pure and outwardly kind man, Hippolytus, really casts her story with Hippolytus in a different light than what we get from primary sources. It was fascinating and tragic, and I loved it. This brings me to Theseus, the opposite of Hippolytus in every way possible. He was obsessed with being a hero, and so I thought that the early description of his "cold green eyes" hints at his cold and cunning soul. He does not care for anyone other than himself, and his lies and manipulation were all calculated and without a second thought for anyone else’s feelings, but only for how it would help him become a greater hero. I really liked the way he was portrayed in this book, but I have a feeling that might change after reading some primary sources of the myth of Ariadne and Theseus.

This review was first-posted on Kell Read.

$27.64
free shipping worldwide
$15.39
plus shipping
By purchasing books through this website, you support our non-profit organization. World History Encyclopedia receives a small commission for each book sold through our affiliate partners.

Ariadne is a figure in Greek mythology, best known for her role...
Definition

In Greek mythology, the Minotaur was a monster with the body of...
Definition

$27.64
free shipping worldwide
$15.39
plus shipping
By purchasing books through this website, you support our non-profit organization. World History Encyclopedia receives a small commission for each book sold through our affiliate partners.
Remove Ads