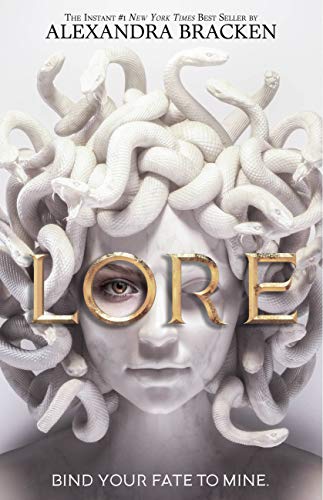 'Lore' by Alexandra Bracken is an action-packed novel which brings the Greek gods and ancient Greece to an urban setting. Every seven years, nine of the twelve Olympians are turned mortal and sent to earth for one week, in an event called the Agon and during the Agon, if you kill a god, you assume their power. If you are a lover of Greek mythology, you will no doubt enjoy this unique read which incorporates gods, goddesses and myths in a clever new way!

Every seven years, nine of the 12 Olympians are turned mortal and sent to earth for one week, in an event called the Agon. During the Agon, the mortal bloodlines of famous Greek heroes such as Perseus, Odysseus, and Achilles hunt the gods, and if they kill one, they assume the gods’ immortality and power. Lore Perseous left that life many years ago, but when her friend Castor (whom she assumed was dead) and a gravely injured Athena both turn up in her life at the beginning of the Agon, she is thrust back into the world she truly hoped she had left for good.

This book was so action-packed, but it never felt overwhelming. This was such a fresh and unique way of bringing Greek gods and Greek mythology into an urban setting, which actually took me a bit to get used to. The idea that the gods could be killed, and then when a human took their powers they also chose a new name for themselves (e.g. the new Dionysus chose 'The Reveler') and would be referred to as ‘the new Dionysus’ for example is so different from any other book I’ve read. I loved the fact that Bracken kept this story in the world we know, and if you are from New York, I can only assume that the places and street names mentioned would have been very familiar!

Reading from the point of view of a character so conflicted was so compelling, AND one of the best parts of this book.

I think one of the things that really struck me was the bloodlines and their beliefs. These groups of people are all descendants of these ancient heroes, heroes that we would be familiar with, but they’re living in the world we know today. They descend from these great heroes and they believe in the Greek gods, yet their religious practices and social order has barely altered in over 2,000 years. I found the contrast between these families believing in archaic systems of men basically owning women, and prohibiting women to be heads of the family or in any position of power, with the modern world which is working so hard to disestablish these ideas to be pretty shocking. There is one scene in one of the flashbacks that literally made my skin crawl. The inequality between men and women that we are still fighting today has been an integrated part of societies for as long as history traces back. We are aware of the lack of choice, of voice, and of freedom that women were given in most (not all) ancient societies, and no one today pretends that the way ancient societies functioned was not inherently misogynistic. But reading these antiquated beliefs functioning in the modern world, with most of the characters accepting it because ‘that’s the way their world is’ was much harder than I thought it would be.

‘She was merely reborn as a being who could gaze back at the world, unafraid’

The occasional banter in this book was such a highlight, plus the way the main characters Lore, Castor, Miles, and Van all converged in a very cute, fond family sort of way. The way the four of them all worked together, and worked to each other’s strengths was a dynamic in this story which I really, really enjoyed. Although, I was never really sold on Lore’s friendship with Iro. I just didn’t feel the depth of their relationship like I did with her and Miles, Castor, and even Van. Having Athena as the main god that Lore interacts with was such an interesting choice, one that I really liked. Athena is the goddess of strategic warfare, wisdom, crafts, and defender of cities and towns. Many of her responsibilities lend themselves to the story which played out in Lore, and I thought she was the perfect choice. I thought the character of Lore was so multi-faceted and three-dimensional. Her constant battle between avenging her family, her guilt, her need for survival, her desire for a normal life, and her inability to forget who she is and who she was brought up to be make this book even more interesting. Reading from the point of view of a character so conflicted was so compelling, and one of the best parts of this book.

“Sometimes the braver thing is to accept help when you've been made to believe you shouldn't need it.”

At one point, Lore brings up Athena’s history and her tendency to give her favour to male heroes, and, using the example of Medusa, her history of turning her back on women. This was another moment for me where the issues of Greek mythology came rushing back in stark contrast to the modern world. The story of Medusa isn’t often depicted as a happy one. The beautiful Medusa (one of the three gorgons) was seduced by the god of the oceans, earthquakes, and horses, Poseidon, in a temple dedicated to Athena. In retaliation for desecrating her temple, instead of punishing Poseidon, she turned Medusa into a monster with snakes for hair and the ability to turn people to stone with one look. The face of Medusa was depicted on Athena’s shield, known as an Aegis, and is the symbol of the House of Perseus (Lore’s bloodline). The plotlines, character motivations and underlying mythological background interwoven throughout this book keeps you constantly on your toes as more information is revealed. It is an intricate balance of modern life, ancient beliefs, and an epic hunt, and Bracken executed it brilliantly. If you want a book that brings ancient myths, gods, and beliefs into an urban setting like you’ve never seen it before, this is the book for you.

$30.96
plus shipping
By purchasing books through this website, you support our non-profit organization. World History Encyclopedia receives a small commission for each book sold through our affiliate partners.

Perseus was one of the greatest and oldest pan-Hellenic heroes...
Definition

Medusa was one of three sisters born to Phorcys and Ceto known...

$30.96
plus shipping
By purchasing books through this website, you support our non-profit organization. World History Encyclopedia receives a small commission for each book sold through our affiliate partners.
Remove Ads