The Roman Empire in 100 Haikus

by Kim Martins
published on 11 February 2020 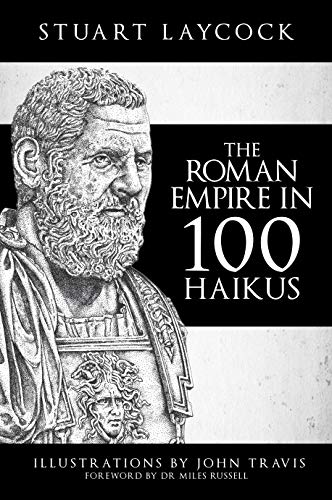 A refreshing look at the history of the Roman Empire through the poetic form of haiku. Aimed at high school students or those who already have familiarity with the subject. A gem of a book to dip into and learn about some of the more unusual aspects of Roman life and history.

The history of the Roman Empire is a complex story. At its height (c. 117 CE) it was the largest empire of the ancient world extending from Britain to Africa and from Syria to Spain. It takes a brave person to tell this story through poetry, but this is exactly what British historian and author, Stuart Laycock, has chosen to do in this delightfully refreshing and confident book.

Laycock uses the haiku - an unrhymed verse form of Japanese origin - to sum up what he considers to be the most intriguing or important political, social, and cultural aspects of the Roman Empire. Japanese poets were inspired by nature or a poignant fleeting moment, and because haiku employs only 17 syllables across three lines of poetry, it forced them to consider what was important to say and what could be left unsaid.

Applying this to history, Laycock restricts himself to 100 key moments that take the reader through the brutality, excitement, and tragedy that was the Roman Empire. Each subject starts with a haiku that summarises the topic but often also has a layered meaning.

This haiku is about Roman racehorses but could equally be an observation of how empires sometimes quickly conquer and expand only to fall just as swiftly.

even the liveliest chargers

There are some unusual subject choices that, at first glance, seem frivolous - popular hairstyles for women and men, famous actors, racehorses, pets, parties, and bikinis. But they add colour and familiarity to a world that had many of the features of our own.

Each haiku is followed by a vignette that provides a fuller narrative description of the subject and fleshes out the haiku. These short pieces, which take less than a page each, are also examples of how Laycock has considered his subject very well. They are concise and to the point, transmitting enough information to the reader without becoming bogged down in dry historical detail. Every piece is accompanied by an illustration that visually summarises the topic. The reader could spend many hours looking at these illustrations alone.

Pick a page at random & there is a witty or thoughtful haiku followed by a short vignette & an illustration.

Invariably, some subjects have been left out or are only lightly touched on. For example, the Antonine Wall is discussed instead of Hadrian's Wall, but this is because Laycock felt it important to highlight attempts to expand Roman Britain by advancing into Caledonia (modern-day Scotland).

There is a timeline of key events at the back of the book, but for those unfamiliar with the Roman Empire and its boundaries or who need a refresher, a map would have been handy.

The real value of this book is how the reader can dip in and out. Pick a page at random and there is a witty or thoughtful haiku followed by a short vignette and an illustration. The reader is guaranteed to learn something, but by reading all 100 haikus and topics, the broad sweep of the empire over the centuries can be appreciated.

Educational and entertaining, Laycock's book will appeal to high school students being introduced to the history of Rome or those already familiar with the ancient world of Roman warfare, emperors, intrigue, and political drama.

It is a book that the reader will turn to often simply because it captures the very essence of the mighty Roman Empire. For teachers, it is a resource to inspire students to explore history through haiku. Our own haiku for this review is:

$13.09
plus shipping
By purchasing books through this website, you support our non-profit organization. World History Encyclopedia receives a small commission for each book sold through our affiliate partners.

The Antonine Wall was the north-west frontier of the Roman Empire...
Definition

Hadrian's Wall (known in antiquity as the Vallum Hadriani or the...
Definition

Britain was a significant addition to the ever-expanding Roman...

$13.09
plus shipping
By purchasing books through this website, you support our non-profit organization. World History Encyclopedia receives a small commission for each book sold through our affiliate partners.