Edge of Empires: A History of Georgia

by Michael Goodyear
published on 07 February 2020 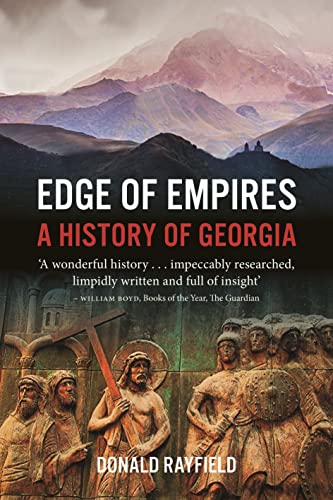 Edge of Empires is a useful reference guide for Georgian history. It is densely packed with facts, making it useful primarily for academics and a valuable reference for those looking for pinpointed facts. However, it should be approached with caution, as while it is helpful for understanding broad trends and facts in Georgian history, the use of citations is scant and non-Georgian historical facts included in the book include several mistakes.

Few English-language histories of the country and land of Georgia have been written. Donald Rayfield's Edge of Empires: A History of Georgia attempts to fill this gap. Rayfield is a scholar of Russian and Georgian literature, and while he has written books on history before, a comprehensive history of Georgia is a difficult task. Sources for most of Georgian history before the past two centuries are incredibly sparse, which is a challenge that leads Rayfield to copy long lists of facts directly into his book. In particular, Rayfield's expertise lies in modern Georgian history, which compounds this issue with the difficulty of understanding ancient and medieval Georgia.

Edge of Empires is filled with minute detail. This denseness makes the book most useful as a reference book while reading it cover to cover would be a foreboding task. The density of facts makes it primarily directed at scholars rather than as an introduction to the region. The chapters on modern Georgian history open up more and are more accessible, no doubt due to both the availability of sources and Rayfield's own familiarity with the topics, but the chapters on ancient and medieval Georgia can read like the rote chronicles of historians from centuries ago. No doubt this is compounded by the paucity of sources from which Rayfield can draw. A telling example is the first paragraph on King Bagrat V, which tells us when he came to the throne, the names of his wives, the children he had, and the rationale for his epithet (146). This makes for a useful compendium of facts and indeed a valuable reference guide if the reader is searching for facts on, say, David IV the Builder or the Mongol invasions of Georgia, but a laborious 400-page read if the reader ventures to gain a more complete picture of Georgian history.

There are few English-language books on Georgian history, which makes Edge of Empires incredibly valuable as a reference book.

Roughly the first half of the book is dedicated to Georgia's history prior to the year 1500 CE. The fact that there are few English-language books on Georgian history makes Edge of Empires incredibly valuable as a reference book. However, when Rayfield departs from Georgian history and discusses neighboring states or events, the reader should approach the facts with a discerning eye. Numerous errors can be found, although it is unclear whether this is due to a genuine lack of knowledge or careless editing. For example, Rayfield says that Frederick II (r. 1198-1250 CE) was focused on the “Ottoman danger” (122). The Ottomans, of course, did not emerge until 50 years after Frederick's death. Rayfield refers to the last Byzantine emperor as Constantine X (157), although the last emperor was Constantine XI (r. 1449-1453 CE). He also references the death of King Charles X of France in 1461 CE (158); in this case, Rayfield is several Charleses too early: Charles VII died in 1461 CE.

But despite these and other errors on non-Georgian history, the work is generally quite accurate on Georgian history. However, it uses only scant footnotes, even for direct quotes, which makes it difficult to fact-check Rayfield's work, and this will disappoint the scholars towards which this book is primarily directed. Certainly, as a reference work, even for ancient and medieval Georgia, Rayfield has made a major contribution to those studying Georgia and neighboring peoples. The book also includes helpful family trees of the various rulers of Georgia.

$21.87
free shipping worldwide
$20.00
plus shipping
By purchasing books through this website, you support our non-profit organization. World History Encyclopedia receives a small commission for each book sold through our affiliate partners.

According to biblical tradition (and some say myth), David (c...
Definition

David IV the Builder or the Restorer (also known as Davit IV Aghmashenebeli...

$21.87
free shipping worldwide
$20.00
plus shipping
By purchasing books through this website, you support our non-profit organization. World History Encyclopedia receives a small commission for each book sold through our affiliate partners.