The Greeks in Asia 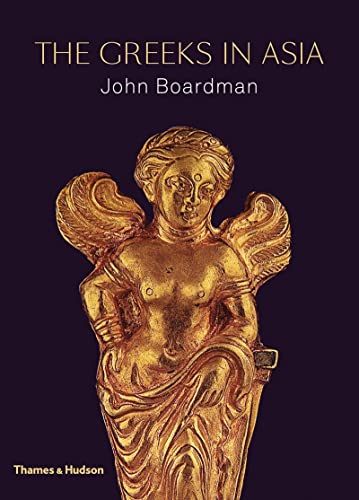 John Boardman examines a wealth of art and artifacts as well as literary sources to reveal the remarkable influence of Greek culture on peoples―Anatolians, Levantines, Persians, Asiatics, Indians, and Chinese―whose civilizations were far older, with their own strong traditions in government, the arts, and daily life.

Written by Britain's most esteemed historian of ancient Greek art and culture, Dr. John Boardman's The Greeks in Asia surveys the historical and cultural influence of the ancient Greeks in the Near East, the Indian Subcontinent, and Central Asia. Delineating the importance of the ancient Greeks in world history, by virtue of their adroit skills in trade as well as the widespread appeal of their religion, art, and philosophies, Boardman's title provides a fine introduction to a topic of interest to many across a variety of academic disciplines.

Divided into seven chapters, The Greeks in Asia is at once accessible and scholastic. Boardman's first three chapters - “The Greeks and the East: Beginnings,” “The Greeks and Achaemenid Persia,” and “The Greeks and Alexander the Great” trace the genesis of ancient Greek interactions with the inhabitants of Cyprus, Asia Minor, and especially Persia. It is Boardman's chapter on Persia in which his mastery of historical texts and art history is most obvious. While it is understandable that many continue to see ancient Greek-Persian relations through the prism of a “clash of civilizations,” Boardman reminds the reader that the artistic, scientific, and political exchanges between Greece and the Persian Empire were of tremendous importance to the Greeks and should not be dismissed. Although the mainland Greeks had escaped the Persian yoke, they could not escape the grandeur or finesse of Persian art and culture. (Here, Boardman enters territory which he has covered in other books, in particular, how Persian sculpture and architecture came to influence Greek styles and motifs before and during the Classical era.)

The core of Boardman's title lies in his treatment and analyses of the Greeks forays and enduring influence in Central Asia and India. Boardman's final four chapters - “The New Greek Kingdoms in the East,” “Greeks and Their Arts in the East,” “Greeks and Their Arts in India,” and “Greeks, Romans, Parthians and Sasanians: Before Islam” - underscore the point that the Greeks were not empire builders like the Persians or Romans. They did not seek to conquer or rule. Boardman writes, “They are an odd phenomenon in world history. Through their travels they came to leave a very distinctive imprint on the lives and arts of many distant peoples.” Nowhere else is this more apparent than in India where Greek philosophy, art, and culture left an enduring imprint cultural imprint on the Indian Subcontinent, and through the expansion of Buddhism, China, Korea, and even Japan too.

As always, Boardman's wealth of knowledge and excellent photographs and maps make The Greeks in Asia useful to the student and specialist alike. (There are 208 illustrations - 50 of which are in color - in a book with only 239 pages.) If there is one critique, it is that one wishes he had spent more time interpreting Greek interactions with Levantine peoples like the Phoenicians and Hebrews.

$39.12
free shipping worldwide
$25.00
plus shipping
By purchasing books through this website, you support our non-profit organization. World History Encyclopedia receives a small commission for each book sold through our affiliate partners.

In this interview, James Blake Wiener, Co-Founder and Communications...
Definition

Esoteric Buddhism is the mystical interpretation and practice of...

$39.12
free shipping worldwide
$25.00
plus shipping
By purchasing books through this website, you support our non-profit organization. World History Encyclopedia receives a small commission for each book sold through our affiliate partners.