by Mark Passehl
published on 18 January 2012
Send to Google Classroom:

Hypaspist translitterates the Greek term meaning shield-bearer, or armour-bearer (ὁ ὑπασπιστής). This noun is formed from the verb ὑπασπίζειν - to carry the shield for another; serve as a shieldbearer. The Shieldbearers of the Argead kings Philip II and Alexander III were the élite Makedonian infantry corps with important roles in the army and at the royal court, where they seem to have constituted the the court guard (as distinct from the somatophylakia, the corps of aristocratic youths who were the bodyguard of the king himself).

Arrian once calls them "the Shieldbearers of the Companions" (Alexander's Ascent, I 14.2: οἱ ὑπασπισταὶ τῶν ἑταίρων, in the battle line at the River Granikos in 334 BC). This might be the formal title of the whole corps, and seems to describe their original function. In the campaign of massacre against the Malli in India (326 BC) Arrian describes individuals from a storming-column of hypaspists as companions (ἑταίροι), and they were also known as Foot-Companions ( πεζέταιροι), probably an innovation during Alexander's reign.

By Alexander's reign they were organized differently from the main army phalanx units into three millenary regiments called chiliarchiai. They also appear to have been recruited "nationally" across regional bounds for service with the royal court and army headquarters, whereas the regiments of the ordinary phalanx (taxeis) were recruited regionally. In accordance with its special function, inseperable from king and court, the entire strength of the hypaspists was taken into Asia in the invasion of 334 BC (several of the phalanx taxeis remained behind in the European dominions under the strategos autokrator, or "viceroy", Antipater).

The technical organization and numbers of the hypaspist regiments appears to have been based on companies of 256 men, each commanded by a syntagmatarchos, with the companies paired into battalions of 512 under a pentakosiarchos, and the battalions paired into a complete millenary regiment of 1,024 under a chiliarchos.

One of the chiliarchies, the élite of the élite, was called the Royal Corps (τό ἄγημα βασιλικόν). It appears to have been in constant attendance upon the king himself and the real physical presence of a royal guard of veteran troops, complementing the more nominal and political role of the bodyguard youths. Whenever the Shieldbearers are mentioned the royal agema is treated more or less as a separate formation, highlighting its special significance, e.g.:

Still the three regiments did form a single corps under one general commander, as mentioned explicitly in the context of the battle-order at Gaugamela (Arrian AA III, 11.9: "the agema of the hypaspists and next to this the other hypaspists, led by Nikanor son of Parmenion", cf. also III 25.4 describing Nikanor as archon of the hypaspists: ὁ τῶν ὑπασπιστῶν ἄρχων).

Since the agema were also hypaspists, the basis of the distinction between the royal agema and the royal hypaspists is unclear. Arrian's reference at Thebes to the agema of Makedones might mean that the agema was composed solely of Makedonian nationals from the traditional low country and coastal lands of the Argead domain, while the other regiments were recruited from the best infantry troops of any formation, whether lowlanders, highlanders or more distant foreigners. It would represent a logical development of the traditional institution under Philip II, who greatly expanded the Makedonian military, and so could well have tripled the size of the hypaspists and in doing so rebadged the original court-guard regiment as the agema of Makedones. It would also explain why Alexander, when in a panic or calling an emergency, addressed his court guards in the Makedonian language rather than the Attic Greek koine he otherwise patronized so vigorously. There is too little information to be sure of such organizational minutiae, and what we do have is complicated by the ongoing development of military and court institutions under both Philip and Alexander. The 3,000 hypaspists at the beginning of Alexander's reign were 6,000 under the early Diadochs, divided into 3,000 Silvershields and 3,000 more ordinary Shieldbearers. It appears that this expansion began during the extensive preparations for the Indian invasion and that the distinctive badges and arms from which the Silvershields were later named (apparently at Susa or Opis in 324 BC) were already being distributed early in the Indian expedition (Curtius ......) to maximize esprit de corps. So that the various formations of hypaspists mentioned by Arrian at the Hydaspes battle may have numbered five or already the full complement of six millenary regiments.

What is clear is that under Philip and Alexander the hypaspists performed court guard duties by rotation in battalions of 500. This responsibility appears to have fallen exclusively to the agema millenary regiment for most of the period but had been extended to the whole Silvershields division before the end of Alexander's reign (Phylarchos fragment, quoted below). In this capacity and especially on grand occasions of state the hypaspists were closely associated with corps of Royal Bodyguards proper (the youthful somatophylakes). So closely indeed as to cause confusion over roles and personel, particularly with respect to officers and commanders of the two corps. This may be illustrated by Diodorus' description of the assassination of Philip by the young somatophylax Pausanias Kalos of Orestis. On this dramatic occasion Royal Bodyguards and hypaspists naturally swarmed and streamed together, some attending to the king's corpse, the rest running down Pausanias on the heels of the princes Perdikkas, Leonnatos and Attalos. The troops who killed Pausanias are described as Bodyguards (Diod. XVI, 94.4: οἱ σωματοφυλάκοι). Leonnatos was young enough to have still been one of the youthful Companions-in-training, Perdikkas the leader of these troops was not. He is attested as commander of a phalanx regiment (the highland taxis from Lynkestis and Orestis) from the storming of Thebes in 335 to Gaugamela in 331, and thus much too senior to be a somatophylax youth in autumn 336, while he only became one of the masters of the somatophylakes after Gaugamela. So it would appear that at the wedding of Cleopatra at Aigai on 1 Dios 336 Perdikkas was either close by the scene of the crime and took charge of the pursuit spontaneously, or was the present commander of the hypaspist battalion on duty that day, and appointed to his taxiarchia in Alexander's first year as king.

It may reasonably be supposed that the hypaspists began as a small force of royal guards for the king and his companions on campaign (as the original Roman praetorian cohort protected a Roman commander and his staff on campaign) with extra pay and campaigning duties which originally included carrying the shields of the noble cavalrymen whenever the latter fought on foot; that this antique role survived in court ceremonials; and that when Philip reorganised his court and assigned day-to-day guard duties to the noble youths (Royal Companions-in-training and hostages for the loyalty of their baronial fathers) he reorganised and expanded the hypaspists for both court and campaigning roles similar to Napoleon's famous Imperial Guard, recruited from the most distinguished phalangites.

That some of the Shieldbearers were on double-pay emerges from Ptolemy's version of Alexander's serious wounding in India in 326 BC inside the walls of a Mallian town. Alexander, Peukestas, Leonnatos and a certain Abreas, one of the double-pay men serving as soldiers, were the only ones to top the Mallian battlements before the two scaling ladders were broken. The jostling assault-troops who broke these ladders were hypaspists (Arrian An. VI 9.4). The word for a man on double pay was ho dimoirites, "he with a double share" - cf. Arrian An. VI 9.3, 10.1, 11.7).

The Shieldbearers carried the sarissa and could attack in phalanx-formation (as it did in most of the major battles of the invasion of Asia) and be included with the regular taxeis in the blanket term "phalanx" (e. g. Arrian An. I 3-4: the 4,000 strong "phalanx" which crossed the Danube under Parmenion's son Nikanor in 335 BC seems to have consisted of one chiliarchy of hypaspists and the taxeis of Meleagros and Philip son of Balakros). But it seems that unlike the phalangitai their drill and expertise extended to other, more flexible, forms of combat and weaponry, so that they could leave their sarissai behind and serve as mobile javelin-throwers or swordsmen for quick pursuits or storming columns. Indeed in the same campaign of 335 into the Balkans Alexander on one occasion formed a fast-moving relief column, to help out Philotas, which consisted of the Shieldbearers, archers, the Agrianes and some 400 cavalry (Arrian An. I 5.10). All those formations formed the core of Alexander's personally-led "flying-columns" throughout the conquest of Asia (Arrian passim, especially books III and IV).

Some have sought their characteristics in the infantry royal agema of the Antigonid king Perseus (Livy 42.51, 44.41), which was a force of 2,000 elite light "targeteer" infantry called peltastai (bearing the pelte or small round "target" shield). They are surely related in some way, but probably only in method of recruitment. Perseus' peltasts were chosen for their physical strength and fitness, but were certainly javelin-throwing light infantry who did not wear cuirass or breast-plate and clearly traced their tactical role back to élite regiments of akontistai like the Agrianes.

The clear distinction between the royal agema and the other hypaspists probably explains the later separate units called Silvershields and Shieldbearers in the period of Alexander's Successors. It appears that the Silvershields were the most élite "Old Guard" of the royal agema, while the rest of the hypaspists simply retained their old name. Another possibility is that the Silvershields were the Makedonian troops and the Shieldbearers of the Diadoch period the élite Iranian infantry recruited by Peukestas on Alexander's orders.

The hypaspists were a type of infantry soldier who served as a...
Image

The Army of Alexander the Great

No military commander in history has ever won a battle by himself...
Lesson Pack

We have prepared four lesson plans including classroom activities...
Definition

Perdiccas (d. 321 BCE) was one of Alexander the Great's commanders... 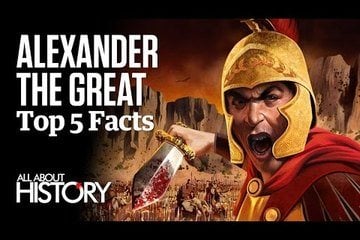 Submitted by Mark Passehl, published on 18 January 2012 under the following license: Creative Commons Attribution-NonCommercial-ShareAlike. This license lets others remix, tweak, and build upon this content non-commercially, as long as they credit the author and license their new creations under the identical terms. Please note that content linked from this page may have different licensing terms.