Running a website with millions of readers every month is expensive. Not only do we pay for our servers, but also for related services such as our content delivery network, Google Workspace, email, and much more. We would much rather spend this money on producing more free history content for the world. Thank you for your help!
$1453 / $21000
❤ Donate

Available in other languages: Spanish, French

Vestal Virgins (Latin: Vestales) were the priestesses of the Roman goddess of the hearth, Vesta, in the state religion of ancient Rome. At varying times there were four to six priestesses employed. They were the only full-time clergy (collegia) of a Roman deity which attests to the high regard in which the goddess was held. They tended the sacred fire in the shrine of Vesta in the Roman Forum and performed other rites associated with the goddess such as caring for the sacred objects in the shrine and inner sanctuary, preparing ritual food and officiating at public events during the yearly Vestalia, Vesta's feast days (June 7-15). They also ritually prepared the herbs sprinkled on sacrifices and made the bread (pane) which was offered on feast days such as March 1st, which was the Roman New Year.

The Roman writer Plutarch (45-120 CE) notes, "Some are of the opinion that these vestals had no other business than the preservation of [the sacred] fire; but others conceive that they were keepers of other divine secrets, concealed from all but themselves." Their duties required them to remain chaste and male clergy were not allowed to participate in the rites concerning Vesta and the Vestales. The Collegia of the Vestales, according to ancient writers such as Livy, was instituted during the reign of the second (possibly mythical) Roman king Numa Pompilius (717-673 BCE) and remained a sigificant part of Roman life until 394 CE when the Christian emperor Theodosius I decreed against pagan rituals, had the sacred fire put out, and dissolved the Vestales.

The virgins were chosen between the ages of six and ten years old by the chief priest and had to serve for 30 years.

The virgins were chosen between the ages of six and ten years old by the chief priest and had to serve for 30 years (during which time they, of course, had to remain chaste). Once their 30 years of service was completed, they were free to marry, but very few did as it was considered unlucky since they had, essentially, been the brides of Vesta for most of their lives and were consecrated to the goddess. Plutarch writes,

The whole [of their] term being completed, it was lawful for them to marry, and leaving the sacred order, to choose any conditions of life that pleased them; but of this permission few, as they say, made use; and in cases where they did so, it was observed that their change was not a happy one, but accompanied ever after with regret and melancholy; so that the greater number, from religious fears and scruples, forebore, and continued to old age and death in the strict observance of a single life.

If a Vestal Virgin failed in her duties, she was severely beaten and the punishment for loss of virginity was being buried alive, though other, worse, punishments were sometimes given such as having molten lead poured down one's throat. Even so, the Vestal Virgins were honored by the community, had most of their needs provided for by temple tithes, and were free of many of the restrictions Roman women had to endure. It was, in fact, because they were so highly regarded that the punishment of breaking their vows was so severe. Plutarch writes, "If these vestals commit any minor fault, they are punishable by the high-priest only, who scourges the offender, sometimes with her clothes off, in a dark place, with a curtain drawn between; but she that has broken her vow is buried alive near the gate called Collina, where a little mound of earth stands." Most of the virgins on record kept their vows, however, and continued through time to honor their goddess Vesta, and the city and people of Rome, until the coming of Christianity.

The fall of the Roman Empire, it was argued, was caused by the acceptance of Christianity and the neglect of the old gods who had kept the city safe and prosperous for so long. Both St. Augustine and Orosius wrote in defense of this very accusation. The desecration of the temple of Vesta, and the disbanding of the Vestal Virgins, was seen by pagans as the height of ingratitude for the service the goddess had given the city over the centuries. A woman named Serena, the Christian niece of Theodosius I, is said to have desecrated Vesta's temple by taking the necklace from her statue and claiming it for her own. For this act she was cursed by one of the last remaining Vestal Virgins and was tormented by nightmares about her impending death. Whether she died young is not known, nor is the truth of the account verified, but the fact that it survives attests to the importance the Vestales played in the life of ancient Rome and what their loss meant to those of the city who did not place their faith in the new god of the Christians.

We want people all over the world to learn about history. Help us and translate this definition into another language! So far, we have translated it to: Spanish, French

Paulus Orosius (usually given as Orosius, 5th century CE) was a...
Definition

Vesta was the goddess of the hearth, the home, and domestic life...
Definition

The Roman Empire, at its height (c. 117 CE), was the most extensive...
Definition

In many societies, ancient and modern, religion has performed a...
Definition 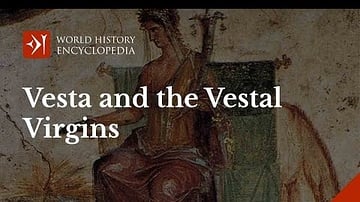 The Roman Goddess Vesta and her Vestal Virgins

The goddess Vesta was the Roman goddess of the home, the hearth...

Submitted by Joshua J. Mark, published on 02 September 2009. The copyright holder has published this content under the following license: Creative Commons Attribution-NonCommercial-ShareAlike. This license lets others remix, tweak, and build upon this content non-commercially, as long as they credit the author and license their new creations under the identical terms. When republishing on the web a hyperlink back to the original content source URL must be included. Please note that content linked from this page may have different licensing terms.