by Mark Cartwright
published on 17 June 2012
Send to Google Classroom:

The pan flute or panpipes (syrinx) was a musical wind instrument first used by the ancient Greeks. Most commonly played by shepherds, the earliest use was in the Cycladic islands in the third millennium BCE, and representations of the instrument run right through the history of Greek art.

Although in some accounts the invention of the instrument was attributed to Cybele or Hermes, the deity most closely associated with the panpipes and widely credited with its invention was the pastoral god Pan. In Greek mythology, Pan, the patron of shepherds, fell in love with the Nymph Syrinx, daughter of Ladon the river-god. Fleeing his attentions, Syrinx pleaded with Zeus to save her and just when Pan captured her, Zeus turned the Nymph into reeds. Enraged, Pan smashed the reeds into pieces but on reflection he was struck with remorse and wept and kissed the broken reeds, all that remained of his beloved. As he kissed the reeds, he discovered that his breath could create sounds from them, and so he made the musical instrument that would carry the lost Nymph's name.

Panpipes were constructed from four to eighteen cane tubes (without any lateral holes) which were fastened together using cane, flax, or wax. Played by holding the instrument in both hands and blowing across the top end of each tube, different notes were produced with different lengths of tubes or by equal length tubes blocked at different points by wax. The sound produced was deep and rich.

The instrument is depicted both in sculpture, such as small marble Cycladic statues and clay figurines, and also on decorated ceramics, particularly red- and black-figure pottery from Attica. Representations of Pan, Hermes, Attis, Satyrs, and more rarely Eros (only in late Antiquity, 2-3rd century CE) often depict them playing the instrument.

Mark Cartwright
Mark is a history writer based in Italy. His special interests include pottery, architecture, world mythology and discovering the ideas that all civilizations share in common. He holds an MA in Political Philosophy and is the Publishing Director at AHE.

Music (or mousike) was an integral part of life in the ancient...
Image

A modern reproduction of the most common form of panpipes played...
Image

A modern reconstruction of panpipes (or syrinx), first used by...
Image

The Judgement of Paris (Detail)

A detail from a fragmentary marble relief depicting the Judgement... 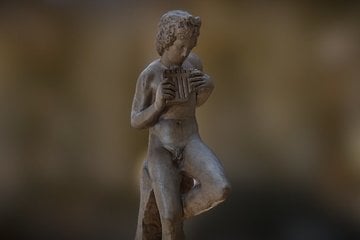 Daphnis, Roman replica of a group from the late 2nd century BC... 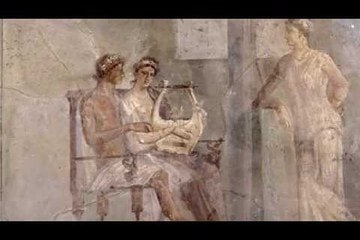 The Seikilos Stele contains the the oldest complete song and dates...
1 2 Next > Last >>

Written by Mark Cartwright, published on 17 June 2012 under the following license: Creative Commons Attribution-NonCommercial-ShareAlike. This license lets others remix, tweak, and build upon this content non-commercially, as long as they credit the author and license their new creations under the identical terms. Please note that content linked from this page may have different licensing terms.