by Mark Cartwright
published on 16 January 2014

Available in other languages: Turkish, French

Mars was the Roman god of war and second only to Jupiter in the Roman pantheon. Although most of the myths involving the god were borrowed from the Greek god of war Ares, Mars, nevertheless, had some features which were uniquely Roman. Considered more level-headed than the often impulsive and disruptive Ares, Mars was also seen as a more virtuous figure by the more martial-oriented Romans. As a protector of Rome and the Roman way of life and as a defender of city borders and frontiers, important festivals connected to warfare were held in his honour and the god was also closely associated with the wolf and woodpecker.

Mars was considered the father of Romulus and Remus, the mythical twin founders of Rome. According to the story, their mother, the Vestal Virgin Rhea Silvia, was raped by Mars while she slept, and in her dreams she had a vision where she dropped a hairpin to the ground, and from which there sprang two twin trees. Over time one of the trees grew so large that it covered the entire world with its shade, a reference to the ultimate success of Romulus and the growth of the huge Roman Empire.

The month of Martius (March) was named after the god and important festivals and ceremonies, usually connected to military campaigns were held in his honour.

Another myth concerning the god of war, this one uniquely Roman, was his marriage to Anna Perenna. The story is re-told in Ovid's Fasti and begins with Mars falling in love with no less a figure than Minerva, but the virgin goddess of wisdom and crafts, wholly unimpressed, rejected his amorous advances. Wondering how he could better impress Minerva and win her favour, Mars sought the help of Anna Perenna, the aged goddess of New Year and Time. However, Anna Perenna quite fancied the handsome war god for herself, and so she double-crossed Mars by disguising herself as Minerva and, wearing a veil, she tricked the god into marrying her. This famous episode of feminine guile was commemorated in Rome on the Ides of March (the 15th) when young girls would sing risqué songs.

The month of Martius (March) was named after the god. Important festivals and ceremonies, usually connected to the preparation and closure of military campaigns, were held in honour of the god in March and October and carried out by Mars' specially dedicated priests, the flamen Martialis. These rites may also have been connected to agriculture but the nature of Mars' role in this area of Roman life is disputed by scholars. The first festival of the year was actually on the 27th of February with the first Equirria, then followed a busy March. There was the feriae Marti festival, held on the 1st of March (the old New Year's Day), the second Equirria on the 14th, the agonium Martiale on the 17th, the Quinquatrus on the 19th (in later times Minerva would assume Mars' role), and the Tubilustrium on the 23rd of March (and again on the 23rd of May). The details of these festivals are sometimes sketchy, but most were related to war and the instruments of warfare. The Tubilustrium involved a series of rites to cleanse and favour trumpets, whilst the Equirria was to ensure all would be well with the horses when on campaign. Another important ritual was performed by the commander of the army about to depart who shook the sacred spears of the god which were kept in the Regia. The general shouted 'Mars vigilia' and, no doubt, asked for a swift and easy victory.

In addition to the festivals where Mars was the central deity, he was also involved with ceremonies relating to the ancient triad of gods which included himself, Jupiter, and Quirinus. On the 1st, 9th and 23rd of March, the priests of this sacred trio, the Salii, sang hymns and dressed themselves in bronze-age armour which included the ancient ancilia figure-of-eight shields. Mars again took centre stage during the Equus October, held on the 15th of that month. This was when a great horse race was held in the Campus Martius of Rome. No doubt the winner of the race won great honour and favour amongst the public, but the fate of one of the horses of the winning team was less fortunate, for the animal was sacrificed with the head becoming a much sought-after prize by the local residents. Finally, there was the Armilustrium festival on the 19th of October, held on the Aventine and which involved the purification of weapons before they were stored away for the winter.

We want people all over the world to learn about history. Help us and translate this definition into another language! So far, we have translated it to: Turkish, French

Ares was the Greek god of war and perhaps the most unpopular of...
Definition

The Champ de Mars Massacre was an incident that took place on 17... 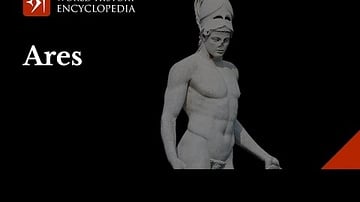 Ares the God of War in Greek Mythology

Ares was the god of war in Ancient Greek mythology and is described...
Article

The ancient Celtic pantheon consisted of over 400 gods and goddesses...
Article

The Shield of Heracles: The Complete Poem

The Temple of Mars Ultor stands in the Forum of Augustus in Rome...

Submitted by Mark Cartwright, published on 16 January 2014. The copyright holder has published this content under the following license: Creative Commons Attribution-NonCommercial-ShareAlike. This license lets others remix, tweak, and build upon this content non-commercially, as long as they credit the author and license their new creations under the identical terms. When republishing on the web a hyperlink back to the original content source URL must be included. Please note that content linked from this page may have different licensing terms.