Our vision: Free history education for everyone in the world, in every language. That's a lofty goal indeed, but that won't stop us from working towards it. To get there we need to translate... a lot! Please donate today and help us make a truly global impact. Thank you very much!
$1478 / $3000
❤ Donate

Generally referred to as the first known analog computer, the quality and complexity of the mechanism's manufacture suggests it has undiscovered predecessors made during the Hellenistic period. Its construction relied upon theories of astronomy and mathematics developed by Greek astronomers, and is estimated to have been created around the late second century BCE.

In 1974, British science historian and Yale University professor Derek de Solla Price concluded from gear settings and inscriptions on the mechanism's faces that it was made about 87 BCE and lost only a few years later. Jacques Cousteau and associates visited the wreck in 1976 and recovered coins dated to between 76 and 67 BCE.Though its advanced state of corrosion has made it impossible to perform an accurate compositional analysis, it is believed the device was made of a low-tin bronze alloy (of approximately 95% copper, 5% tin). All its instructions are written in Koine Greek, and the consensus among scholars is that the mechanism was made in the Greek-speaking world.

In the late 2000s, findings of The Antikythera Mechanism Research Project suggest the concept for the mechanism originated in the colonies of Corinth, since some of the astronomical calculations seem to indicate observations that can be made only in the Corinth area of ancient Greece. Syracuse was a colony of Corinth and the home of Archimedes, which might imply a connection with the school of Archimedes. Another theory suggests that coins found by Jacques Cousteau in the 1970s at the wreck site date to the time of the device's construction, and posits its origin may have been from the ancient Greek city of Pergamon,home of the famous Library of Pergamum. With its many scrolls of art and science, it was second in importance only to the Library of Alexandria during the Hellenistic period.

The ship carrying the device also contained vases in the Rhodian style, leading to a hypothesis the device was constructed at an academy founded by the Stoic philosopher Posidonius on that Greek island. A busy trading port in Antiquity, Rhodes was also a center of astronomy and mechanical engineering, home to the astronomer Hipparchus, active from about 140 BCE to 120 BCE. That the mechanism uses Hipparchus's theory for the motion of the moon suggests the possibility he may have designed, or at least worked on it.

Cardiff University professor Michael Edmunds, who led a 2006 study of the mechanism, described the device as "just extraordinary, the only thing of its kind", and said that its astronomy was "exactly right". He regarded the Antikythera mechanism as "more valuable than the Mona Lisa".

In 2014, a study by Carman and Evans argued for a new dating of approximately 200 BCE.Moreover, according to Carman and Evans, the Babylonian arithmetic style of prediction fits much better with the device's predictive models than the traditional Greek trigonometric style.

In mid-2014, a diving expedition to the shipwreck initiated by the Hellenic Ministry of Culture and Sports hoped to discover further parts of the Antikythera Mechanism but was cut short due to bad weather. Another expedition is planned for spring 2015.
THIS VIDEO IS PRESENTED AS " FAIR USE " FOR EDUCATIONAL PURPOSE , NON-PROFIT ,RECEIVING NO FINANCIAL CONSIDERATION FOR DISPLAY OF THIS CONTENT FOR PUBLIC VIEWING .

Copyright Disclaimer Under Section 107 of the Copyright Act 1976, allowance is made for fair use for purposes such as criticism, comment, news reporting, teaching, scholarship, and research. Fair use is a use permitted by copyright statute that might otherwise be infringing. Non-profit, educational, or personal use is in favor of fair use.

Astronomy is an area where the Greeks displayed a remarkable talent...
Definition

The achievements of ancient Greek science were amongst the finest...
Definition 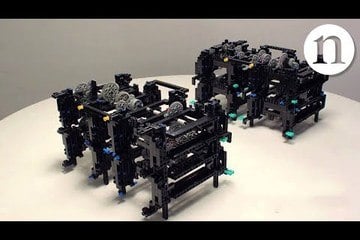 The Antikythera Mechanism: http://bit.ly/fm4oFK is the oldest known...
Image

The Antikythera Mechanism (c. 50 BCE), a device used to calculate...

Original video by UFO,s ON TIAMAT - KI. Embedded by Mark Cartwright, published on 04 March 2016. Please check the original source(s) for copyright information. Please note that content linked from this page may have different licensing terms.