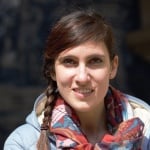 I am a freelance translator and a bookworm. I really believe in the power of languages and sharing knowledge. Traveling and meeting new cultures is essential for me.

I had the chance to live in Edinburgh where I fell in love with Scottish history and culture. I am also interested in South-Asian and Asian history and cultural background, in particular after some trips to Sri Lanka, Indonesia, and Thailand.

337 people have read this user's contributionsⓘ