1368: China and the Making of the Modern World

by Paul Everding
published on 09 January 2023 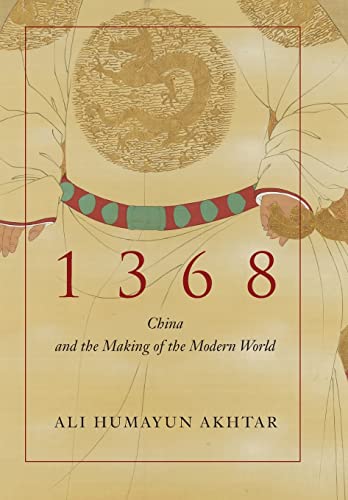 Readers seeking a new perspective on when globalization began will find Ali Humayun Akhtar's book an important and insightful read. This book examines over 600 years of economic interaction between China and Europe from an Asian perspective.

Globalization is a current buzzword in business, communications, and politics, especially in this early part of the 21st century. Traditional American historical interpretations focus on the post-World War II era of the 1950s and 1960s as the beginnings of globalization. As Ali Humayun Akhtar argues, however, globalization began over 650 years ago in China. The information contained within 1368: China and the Making of the Modern World is not new; I studied much of this as an undergraduate. What makes this book refreshing is its Asian-focused perspective and its unique assertion of when our modern “globalized” world actually began to take shape.

What makes this book refreshing is its Asian-focused perspective and its unique assertion of when our modern “globalized” world actually began to take shape.

It is obvious that Akhtar, Professor of Asian Studies at Bates College, is passionate about his subject matter. He chose 1368 as his focus point because it was the year that the Ming dynasty succeeded the Yuan. Even before European trade ships reached Chinese shores, the Yuan had actively cultivated trade networks between the Ottoman Empire, Middle Eastern and Central Asian Muslim empires, and regions in Southeast Asia. Their goal was economic but also political as the Ming sought to gain tributary clients.

During Europe’s Age of Exploration, the Spanish, Portuguese, and Dutch attempted to cultivate commercial relations with the Ming with the latter two countries achieving high levels of success. During this period, spices and silk were highly sought-after items, but the most prized commodity was Chinese porcelain. Originally imported into the Middle East and Europe as a luxury item, it spawned pseudo-porcelain industries in both of these regions. Eventually, England, bolstered by both the Industrial Revolution and the British East India Company’s willingness to use military force for its own gains, wrested economic dominance from China and ushered in a period of European and American control during the late 19th and 20th centuries.

While a short book, Akhtar’s book covers a tremendous span of history. Chapter One provides an overview of the economic networks created by the Song and Yuan dynasties, especially in Central Asia and with Venice. Chapters Two through Four focus on Ming’s maintenance of Yuan commercial clients as well as expansion into areas further afield. Chapters Five and Six introduce European attempts to gain access to trade in the Spice Islands, especially through the participation of Jesuits. The accounts of Jesuit interaction with Ming China are particularly intriguing as the Jesuits both provided a window for Europeans into China and served in high positions within the Chinese bureaucracy. Chapter Seven examines how the Dutch helped create a market for Chinese and imitations of Chinese porcelain in Europe while Chapter Eight describes how England not only acquired a taste for tea but, by seeking to learn the Chinese secrets of tea cultivation, transformed both Europe and the Middle East from coffee-drinkers to tea-drinkers. The final chapter examines Japan’s modernization and replacement of China as Asia’s economic power during the last half of the 20th century. The epilogue returns to China and considers its re-emergence as a global economic power.

Akhtar's book is an interesting read. It is geared toward a scholarly audience, and readers lacking a sound knowledge of Asian history will find themselves with numerous questions regarding background and context. The greatest weakness of the book was the absence of historical maps of the regions covered. It is one thing to know the current political boundaries of China and other Southeast Asian nations, yet it is quite another to study those regions during 1368, 1644, or even 1912, when China removed its last emperor from power. At times the prose seems needlessly convoluted and structurally repetitive, which will slow some readers down. This book, regardless, remains a thought-provoking read and is well worth the time.

$29.40
free shipping worldwide
$23.49
plus shipping
By purchasing books through this website, you support our non-profit organization. World History Encyclopedia receives a small commission for each book sold through our affiliate partners.

Paul Everding
I have taught high school history and composition since 1994. One of my passions is history, particularly the World War II era, military history and the ancient world.

Ancient China produced what has become the oldest extant culture...

$29.40
free shipping worldwide
$23.49
plus shipping
By purchasing books through this website, you support our non-profit organization. World History Encyclopedia receives a small commission for each book sold through our affiliate partners.