Strategos: Born in the Borderlands

by Jessica Settergren
published on 20 December 2022 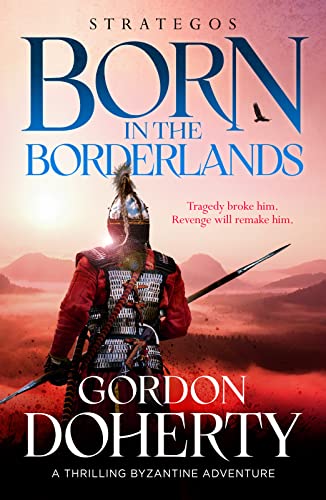 This historical novel is the heroic origin story of Apion, a Byzantine boy living with Seljuk Turks when the border between Byzantium and the Seljuk Sultanate is unstable. This is a great story for anyone who likes ancient or medieval Near Eastern history and adventure tales. Apion's journey is quite a ride. Written for a general audience, I'd recommend this book to readers of high school age or older.

Strategos: Born in the Borderlands, by Gordon Doherty, is a novel following the incredible exploits of Apion, a Byzantine boy living among Seljuk farmers in the lawless area at the edge of Byzantium in the 1040’s CE. Set in Anatolia (modern-day Turkey), this first book in a series of three novels covers Apion’s early years and heroic rise in a time when the Byzantine Empire is pulling troops from the border between themselves and the Seljuk Sultanate while the Seljuk army is preparing for war.

Apion is orphaned young in terrible circumstances resulting in a semi-crippling injury. Picked up from a slave market by a farmer who happens to be a former Seljuk soldier, Apion bonds with his adoptive Seljuk family and neighbors. He learns the language and spends many nights playing a chess-like strategy game with Mansur, his adoptive father. All would be idyllic, except Apion is driven by a need for finding the man who killed his parents and avenging them. It is his need for revenge that sends him to join the Byzantine army.

Doherty’s writing is evocative, providing richly detailed scenes of life in medieval Byzantium. He is clearly passionate and knowledgeable about multiple historical militaries; his descriptions of the different ranks’ armor, weaponry, and tactics bring Apion’s world into focus. Doherty’s battle scenes are exciting and well done. He does fall into the trap of the “bad army” Seljuks depicted as more brutal than the Byzantine side, particularly in horrifically thorough instances of impalement. Overall, though, he is effective in depicting the cultural motivations and long-standing differences of both Byzantine and Seljuk characters and successfully creates three-dimensional villains for Apion at both a personal and political level. I am a fan of any author who can remove the cardboard cutout aspect of an “evil for evil’s sake” villain and give them their own lives and agendas.

I loved the idea that the various people living in Anatolia would have heard of the Haga, a Hittite mythological eagle with two heads, which comes into play more than once. I have seen comments arguing that no one living in the 1040’s CE would have any idea who the Hittites were, much less anything about Hittite mythological creatures, but it is not inconceivable that myths pass down orally and stick around even after the society that birthed them has gone. Stories of myths woven into everyday life in novels engage me vastly, and the Haga threads a bit of heroic destiny throughout Apion’s story.

Strategos: Born in the Borderlands follows a typical hero’s journey with some Mary-Sue moments. Apion develops all his extraordinary battle and tactical thinking skills at an improbable speed. He is supposed to be a prodigy, but some of his military abilities seemed a little far-fetched considering his background and injury. Also, his interpersonal conflicts were predictable; the romantic subplot seemed forced, which made subsequent events that should have been emotionally impactful feel unnecessary and flat. Overall, however, I thought Apion’s story was a satisfying read.

Gordon Doherty has written four historical novel series and many short stories. This is the second Doherty book that I have reviewed, and again I thoroughly enjoyed his ability to bring the people in Anatolia to life in vivid and compelling ways. Due to some disturbingly accurate scenes of torture and violence, I would not recommend this one to anyone younger than high school students. I highly recommend Strategos: Born in the Borderlands to all readers interested in ancient military history and the ancient and medieval Near East and people who love a solid adventure tale. I am looking forward to reading the next two books in the series.

$3.99
plus shipping
By purchasing books through this website, you support our non-profit organization. World History Encyclopedia receives a small commission for each book sold through our affiliate partners.

The Style & Regional Differences of Seljuk Minarets in Persia

Under the Seljuk rule, Persia gained a period of economic and cultural...
Definition

The ancient city of Byzantium was founded by Greek colonists from...
Article

The AHE team live and breathe history, but we all have our favourite...

$3.99
plus shipping
By purchasing books through this website, you support our non-profit organization. World History Encyclopedia receives a small commission for each book sold through our affiliate partners.