The Eternal Decline and Fall of Rome: The History of a Dangerous Idea 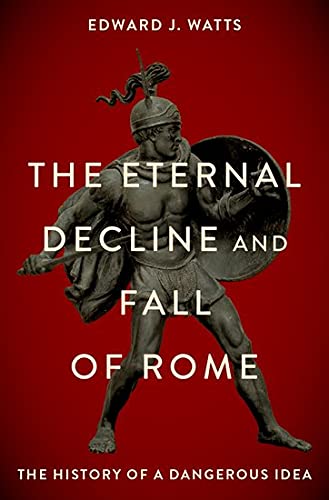 In this extremely important and timely discussion, Edward Watts tells the history of Rome through a "dangerous idea": the narrative of Rome's decline and fall. Watts's book offers a much-needed warning to all history readers against using a "decline" narrative as the framework for modern society. The narrative of "decline" was often used as a scapegoat for programs in the Roman Empire that led to losses of life, liberty, and happiness.

In the book's Introduction, Edward Watts sets out his premise clearly. Roman politicians grew their power by destabilizing the present conditions of their society. As Watts points out, when trying to restore Rome, politicians often violated certain populations by targeting them as obstacles that prevented Rome from restoration in the face of a major challenge. Watts warns the readers that this narrative of a dire challenge was, and is, a dangerous idea that, as it did in the past, could lead to violence today.

Watts warns the readers that this narrative of a dire challenge was, and is, a dangerous idea that, as it did in the past, could lead to violence today.

The Eternal Decline and Fall of Rome contains 17 chapters. Chapters One and Two talk about how the growing wealth inequality in the Roman Empire during the 2nd century BCE first led to the narrative of Roman decline. Violence and expropriation were seen by many as the only solution to this inequity. These cycles of violence accelerated the death of the republican order. Augustus's monarchy soon followed. Chapter Four notes how the continuity of the dynasty made the propaganda under the Antonine emperors a difficult affair since they could not simply blame current problems upon their successors.

The inverse problem is explored in Chapters Five and Six. The quick turnover of emperors made the 3rd century CE propagandists present the time as especially dire, despite how the living conditions in the 3rd century remained fairly consistent to the 2nd century CE. This pitch of decline narratives led to the first wave of Christian persecutions, the destruction of local Roman autonomy in Syria and Gaul, and the increase in the Roman government's brittleness. Chapters Seven and Eight note that Constantine's successors abandoned his religious tolerance while the Roman military faced many disasters in the late 4th century CE. Both of them led to a period of harshness and intolerance in the imperial government.

This did not last long in the eastern parts of the Roman Empire. Chapter Ten argues that those living in Italy by the end of the 5th century CE felt that they were achieving Roman revival under Gothic rulers. However, the visions of orthodoxy and Constantinopolitan primacy drove Emperor Justinian to characterize the West as having declined and collapsed. Wars then ensued, resulting in the deaths of hundreds and thousands in Italy, the ravaging of the Italian countryside, and the bankruptcy of the Roman imperial treasury.

Chapter 13 narrates the end of Eastern Roman stability under the Macedonian dynasty in the 11th century CE. Chapter 14 tells of how the Comnenians sought Catholic aid to restore the Roman Empire, but that this led to the mass slaughter and destruction of the Crusades. Chapters 16 and 17 look at how after the Ottomans conquered Constantinople in 1453, western Christians from Charles V to Benito Mussolini sought to restore the Roman Empire either by regaining Constantinople or by conquering the lands that were once under Roman rule. All these attempts led to incredible violence and misery.

This book is very readable with endnotes that avoid cluttered pages for casual readers and a thorough index for people conducting more detailed research. Visuals are a weakness of this book, as the sparse illustrations seem randomly chosen and could have been used more effectively. Having more maps would have been useful for non-specialist readers as well.

The author, Edward J. Watts, is Professor of History and Alkiviadis Vassiliadis Endowed Chair in Byzantine Greek History at the University of California, San Diego. While Watts's book examines a broad time range, this book never relents from its premise. It is a great read for Roman history enthusiasts and experts alike. Watts frames the history of the Roman Empire into lessons and warnings for people today, and perhaps this is one of the most productive approaches toward an already widely researched time in history. The Eternal Decline and Fall of Rome might be one of Watts's most significant books.

$31.07
free shipping worldwide
$25.71
plus shipping
By purchasing books through this website, you support our non-profit organization. World History Encyclopedia receives a small commission for each book sold through our affiliate partners.

Evan Axel Andersson
Evan Axel is a Ph.D. candidate in History at the University of California in Santa Barbara where he researches and teaches Late Roman philosophies, religions, and society. His current work focuses on the Oxyrhynchus papyri, magic, and social networks.

Fall of the Western Roman Empire

To many historians, the fall of the Western Roman Empire in the...
Definition

The Western Roman Empire is the modern-day term for the western...

Andersson, E. A. (2022, November 26). The Eternal Decline and Fall of Rome: The History of a Dangerous Idea. World History Encyclopedia. Retrieved from https://www.worldhistory.org/review/308/the-eternal-decline-and-fall-of-rome-the-history-o/

$31.07
free shipping worldwide
$25.71
plus shipping
By purchasing books through this website, you support our non-profit organization. World History Encyclopedia receives a small commission for each book sold through our affiliate partners.