by Graham Squires
published on 15 November 2022 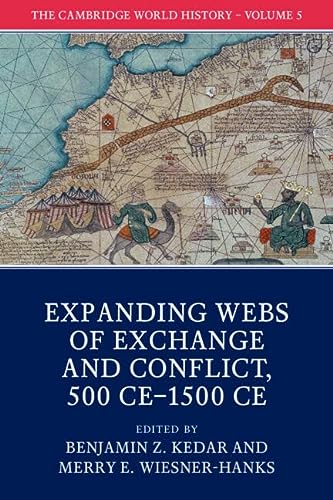 This book is the fifth volume in "The Cambridge World History" series. This book focuses on the ways different societies around the world became increasingly interconnected between 500 CE and 1500 CE. It is a collection of many informative essays by different authors, and although university students might benefit from this title the most, it is accessible to a general audience.

In 2015, Cambridge University Press published a seven-volume series titled "The Cambridge World History." The series aimed to offer a comprehensive account of a variety of cultures and communities as they are understood today. The range of the series can be shown by looking at the individual titles:

Similar to an encyclopedia, this book makes it easy for readers to pick and choose the individual articles they are interested in studying.

Although this book review is aimed at Volume Five, the comments in this review probably apply to all the books in the series. The editors of the volumes, all of whom are leading academics in the field, have undertaken a massive task in bringing together so many scholarly articles on such a diverse range of topics. Volume Five alone contains 25 essays. The quality of the individual essays seems excellent, as they are well-researched. Contributors to all volumes are established scholars or professors in their specific historical fields. Similar to an encyclopedia, this book makes it easy for readers to pick and choose the individual articles they are interested in studying. For example, one can read only Richard Smith's essay “Trade and Commerce Across Afro-Eurasia” without feeling the chapter is out of context. It is common to conceptualize Europe, Asia, and Africa as different continents when, in fact, they are all joined together geographically and socially through trade routes, expeditions, or wars. The focus on the connections between different societies around the world is one of the strengths of this book. Although the essays contain several maps, the visuals could have been used in a more helpful way.

The main concern regarding this volume is not with the individual essays it contains but with the structure of the series as a whole. The series seems to lack a clear focus. Each volume has a theme, but the themes are often too broad to be meaningful. Volume Five deals with "expanding webs of exchange," yet it covers a period of 1,000 years. This massive time range seems to be too much to cover in a single book. One of the goals of "world history" is to try and counter the Eurocentric bias that characterizes historical writing from earlier generations. This is a worthy objective because that kind of ethnocentrism is no longer viable in the world we live in. To become inclusive, however, the editors of this series have cast their net too wide. Rather than trying to include everything, it would have been better to reduce the scope of the series to give more attention to specific topics. In addition, it would also help to have a longer Introduction for each volume to provide the readers with more background information about the period being discussed. Having an extended Introduction would be especially helpful for readers who are interested in, but not experts on, that particular time, and this would make the books more accessible to a wider audience beyond academia. The reason why the Introduction is not made longer might be that it would be difficult to get an agreement on what a narrower set of themes and topics should be. Cambridge University Press publishes many multi-volume series like this one. The ones that seem to work best are those that have a narrower focus and clearly defined themes.

Nonetheless, the volumes in this series are tremendous resources. College professors or instructors should feel comfortable assigning undergraduate students essays from these volumes as reading materials. A huge amount of work has gone into producing these accurate and informative essays. In addition, the volumes are very reasonably priced given the lengths of the books.

$57.73
free shipping worldwide
$31.99
plus shipping
By purchasing books through this website, you support our non-profit organization. World History Encyclopedia receives a small commission for each book sold through our affiliate partners.

The Columbian exchange is a term coined by Alfred Crosby Jr. in...
Definition

Knights were the most-feared and best-protected warriors on the...
Definition

Medieval literature is defined broadly as any work written in Latin...

$57.73
free shipping worldwide
$31.99
plus shipping
By purchasing books through this website, you support our non-profit organization. World History Encyclopedia receives a small commission for each book sold through our affiliate partners.