Persians: The Age of the Great Kings 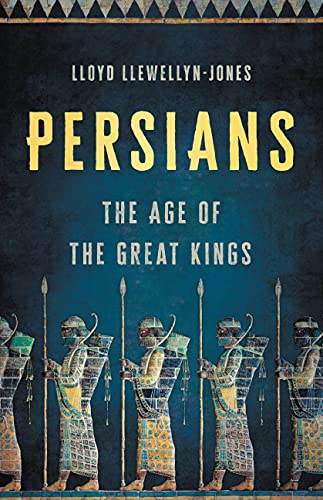 "Persians: The Age of the Great Kings" is written for a popular audience. It aims to set the record straight on the Achaemenid Persian Empire, giving us the Persians' own version of their history after more than two thousand years of Western distortion and misinformation. Unfortunately, Llewellyn-Jones ends up introducing distortions of his own, and I cannot recommend his book for general readers.

The central idea of Lloyd Llewellyn-Jones's Persians: The Age of the Great Kings is simple. The Achaemenid Persian Empire, which flourished from the sixth to fourth centuries BCE, was unjustly smeared by its Greek enemies as barbaric and effeminate. Greek propaganda was then repeated, and amplified, by subsequent generations of European colonialists, who used it to justify their own views of racial superiority and imperialism. Now, however, we possess enough native accounts to get at the "Persian Version" (the phrase is borrowed from a poem by Robert Graves) of Achaemenid history. It is this version that Llewellyn-Jones aims to give us.

Now, however, we possess enough native accounts to get at the "Persian Version" ... of Achaemenid history. It is this version that Llewellyn-Jones aims to give us.

There is a good deal of truth in the author's idea, but in his eagerness to set the record straight, Llewellyn-Jones has produced a work that often feels less like a fresh perspective on a misunderstood people and more like an extended polemic against Western historiography in general and the Ancient Greeks in particular. Usually, this polemic takes the form of overly harsh comments (the fact that Westerners today say Darius instead of the more authentic Dārayavaush, for instance, is "a sad indictment of the corrupting process of Western historiography," [p. 8]), which are annoying - as in the severeness that the author describes is debatable - but can ultimately be accepted. More consequentially, the author sometimes misrepresents his sources while raising these harsh comments. Consider, for example, Llewellyn-Jones's paraphrase of a scene from Herodotus:

When, for instance, Herodotus narrates Xerxes' march through Asia into Greece, he notes that as the king reaches the town of Kallatebos, not far from the crossing of the river Maeander in south-western Turkey, Xerxes saw by the roadside a magnificent plane tree. He was smitten with love for it. He mooned over it, praised it, adored it, and loaded it with lavish gifts, like those bestowed on a lover. Xerxes hung the tree's branches with golden ornaments – necklaces, earrings, and bracelets – until they groaned under the weight of his generosity. He arranged that a man should stay there as the tree's guardian for ever after. Then, bidding the tree a sad farewell, the king proceeded on to Sardis (p. 233).

There seems a clear undertone of scorn in Herodotus's account. King Xerxes comes across as frivolous and unserious at best, or nonsensical at worst. The sort of man who would moon over a vegetable is clearly unfit for any kind of power, let alone the absolute authority which Achaemenid kings enjoyed. The whole passage is a "poisonous Herodotean spin" (p. 235) by a man who "misrepresents and maligns the Persian king skilfully and deliberately" (p. 233).

Or is it? Let's see what Herodotus actually says:

From Phrygia [Xerxes] crossed over into Lydia. Here the road splits in two, with the left-hand branch leading to Caria, and the right-hand towards Sardis; on the latter it is necessary to cross the River Maeander and pass by the city of Kallatebos, where craftsmen make honey out of tamarisk and wheat. Going along this road, Xerxes found a plane-tree, which he adorned with gold because of its beauty, and appointed a man to watch over it in never-ending succession. On the day after this, he arrived at the city of the Lydians (Herodotus, Histories 7.31).

Herodotus's account is much more straightforward than Llewellyn-Jones's and, crucially, much less scornful. There is no talk of Xerxes mooning over the tree, adoring it, or bidding it a sad farewell. In order to present the Greek historian as some kind of anti-Persian bigot, Llewellyn-Jones has imported a tone of derision that is simply not found in the original. Checking passages like this is harder than it should be because Llewellyn-Jones's book has virtually no in-text citations and completely lacks footnotes and endnotes, even for direct quotations.

Persians: The Age of the Great Kings does contain a lot of interesting materials: the chapters on Achaemenid affairs between Xerxes's invasion of Greece and Alexander's invasion of Persia are particularly valuable, as this period tends to be neglected in Western popular history. People who already know enough about the Ancient Greeks to recognize when Llewellyn-Jones is misrepresenting them might read this book for an overview of Achaemenid history. Anyone else should look elsewhere for their reading material.

$34.80
free shipping worldwide
$23.25
plus shipping
By purchasing books through this website, you support our non-profit organization. World History Encyclopedia receives a small commission for each book sold through our affiliate partners.

Guy Jackson
Guy Jackson is an independent writer based in England. His main passions are ancient and medieval history and the history of philosophy.

Herodotus: On The Customs of the Persians

$34.80
free shipping worldwide
$23.25
plus shipping
By purchasing books through this website, you support our non-profit organization. World History Encyclopedia receives a small commission for each book sold through our affiliate partners.