Trade, Traders and the Ancient City 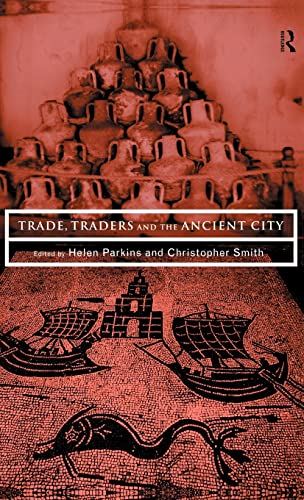 "Trade, Traders, and the Ancient City" delves into the nature of exchange and commerce and the influence this had on communities from the Bronze Age Near East to late Roman northern Italy. The volume examines the importance and the effects of trade in the ancient world using the latest archaeological, papyrological, epigraphic, and literary data.

This book on trade and commerce in antiquity is a blend of papers that originated from a conference at the University of St Andrews on 11 and 12 July 1995. Additional contributions were also made by several scholars. The project aims at a more scholarly audience, as the topic and the arguments used focus on providing greater insight into different economic elements that made up the mysterious aspects of the exchange of goods, and concern the function of the ancient city. Even though this kind of academic work does not aim at a broader audience, those who are intrigued by the cryptic nature of the era must certainly give it a shot. Since it explores the nature under which ancient human relationships mingled and developed, the reader is supplied with a fascinating insight into the functionality of ancient economic history. The volume's purpose is to build a pathway for a greater comprehension of the ancient economy and the importance of trade as one of the pillars of the era’s economy. Furthermore, by compiling this work, the editors, Helen Parkins and Christopher Smith, felt the need to enhance a further collaboration of the fields of history and archaeology's experts in order to overcome the disciplinary boundaries’ “rapid blur”.

In the seventh chapter, Laurence demonstrates that the expense of land transport should not be used as a reason against interconnected markets.

The first chapter by Perkins introduces the topic by summarizing the book's intentions and the means to provide a gradual interaction with the volume. Then, in the second, Amelie Kuhrt, who is specialized in the ancient Near East, writes that the study of the sophisticated old Assyrian trade structures could grant a fresh perspective to the already overstudied data of the Graeco-Roman period. The third chapter, written by the second editor of the volume, Christopher Smith, unravels the web of the cultures and the economies of Archaic central Italy. He projects his ideas from the perspective of pottery, and how the craftsmen could be an instrument in the creation of the city. In the fourth chapter, Tsetskhladze poses a number of questions towards the conventional beliefs in the data gathered in the Greek colonization of the Black Sea coastline. He aims to eventually unravel the uncertainty over the metal, grain, and slave trade of the region. The fifth chapter, by Mark Lawall, supplies the readers with archeological evidence based on pottery. The evidence indicates how the need for organizational reforms emerged by the economic growth of Chios in the sixth and fifth century BCE.

Whitby, in the sixth chapter, acknowledges the difficulties of the Athenian grain trade in the fourth century BCE. He considers that the multiple methods by which the Athenians may be demonstrated to have kept track of their grain supply which could point to a direction for more answers in the debate. In the seventh chapter, Laurence demonstrates that the expense of land transport should not be used as a reason against interconnected markets. Paterson, in the next chapter, contends that the Roman Empire's expanded commercial prospects were the primary motivator for the trade, instead of Rome’s high taxation. The ninth chapter reveals Alston's intentions to illustrate how a collection of the Egyptian source material might be utilized to piece together a hypothesis of interregional trade. The next chapter, written by Humphries, emphasizes the relationship between trade networks and the growth of the early church. He demonstrates how the first Christian centers in northern Italy corresponded with market or manufacturing centers. Finally, Davies attempts to build a new model for the ancient economy that integrates all levels and types of activity and also explains their interrelationship. Thus, he aims to connect the many viewpoints presented by the other participants in this fascinating collection of essays.

$127.27
free shipping worldwide
$117.00
plus shipping
By purchasing books through this website, you support our non-profit organization. World History Encyclopedia receives a small commission for each book sold through our affiliate partners.

In the study of the ancient world a City is generally defined as...
Collection

The ancient Mediterranean was a busy place with trading ships sailing...
Article

Global Trade in the 13th Century

In the 13th century, astonishing quantities of spices and silk...

$127.27
free shipping worldwide
$117.00
plus shipping
By purchasing books through this website, you support our non-profit organization. World History Encyclopedia receives a small commission for each book sold through our affiliate partners.