The Crusades: The Flame of Islam 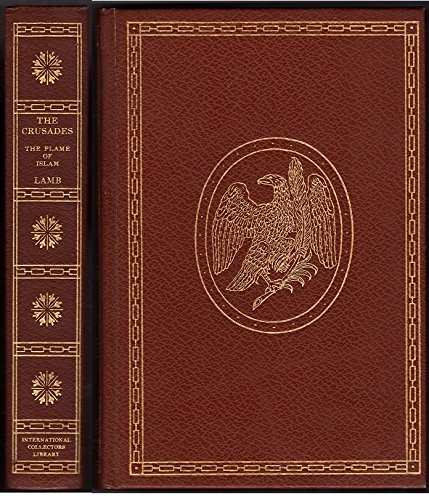 Harold Lamb perfectly contrasts the Islamic society of medieval times against that of the Europeans amidst the Crusades. He manages to bring out the best of both worlds at a time when they clashed violently for the control of the Holy Land. His portrayal of both sides is fair and just; I highly recommend this book to anyone seeking to expand their knowledge of this era.

The Crusades of the Middle East may not have lasted for more than two centuries but the fictionalization of events and distortion of facts to prove one's side right and the other's wrong, continued for centuries later and is even seen in modern times. Amidst such confusion and chaos, Harold Lamb's two-volume masterpiece on the Crusades is a welcome relief for those who yearn for as accurate a picture as possible. He used information from both Muslim and Christian sources in order to present as complete a narrative as the resources at hand allowed him to.

So gripping is Lamb's reconstruction of the ancient times that even though I initially only wanted to go through the segments describing Saladin's exploits, as I traversed through the pages of this uncharted odyssey, I failed to keep myself from reading on until the book shook me off with "The End." The description of the time, places, and people may border on the fictional side but the events detailed are all historically accurate for the most part, except for minor details that may have eluded the writer when he was working on this book. Considering that the internet was not as widespread and access to knowledge was not as unabated as it is today, we can certainly expect some details missing.

The second volume, aptly named "The Flame of Islam," picks up from the events of the year 1169 CE, when Saladin rose to prominence in Egypt and started on a decades-long struggle to fight off the Crusades from the Holy Land and reconquer Jerusalem. For a significant portion of its length, the book details Saladin's exploits in great depth and then carries on with the state of the Muslims after his demise in 1193 CE.

Lamb treats the opposing sides as humans rather than friends & foes.

All the while, Lamb continues to shift perspectives and puts his readers in the shoes of the Latin knights and their kings, showing how these men went to all extents in their bid for survival. Every instance worth mentioning from both sides is detailed to such a fine level that the book could easily put to shame some of the most talented screenplay writers who have worked in the history niche. Lamb treats the opposing sides as humans rather than friends and foes, the narrative twists and turns, takes detours deep into Europe where it shares insights about the Crusader cause, and how the idea was misused for personal vendettas, leading to the failure of the knights in the Holy Land.

"The Last Stand" ends this chapter of history by detailing the events that followed the siege of Acre in 1291 CE. But a worthwhile chunk of reading also exists further ahead in the "Afterword," which narrates how, by treachery, the Knights Templar, who had served the European cause for years, were subjected to fate parallel to that of the Spanish Inquisition, in their own country, under the canopy of their supreme leader, the Pope.

Such a well-explained account is sure to help anyone develop a strong grip over this era of history, and while the book may fade in comparison, in some areas, to modern texts, it is still very relevant and worth your time. I highly recommend it to any history aficionado.

$13.49
plus shipping
By purchasing books through this website, you support our non-profit organization. World History Encyclopedia receives a small commission for each book sold through our affiliate partners.

The Knights Templar were established c. 1119 and given papal recognition...
Definition

$13.49
plus shipping
By purchasing books through this website, you support our non-profit organization. World History Encyclopedia receives a small commission for each book sold through our affiliate partners.